Abortion debates: Discussion instead of division 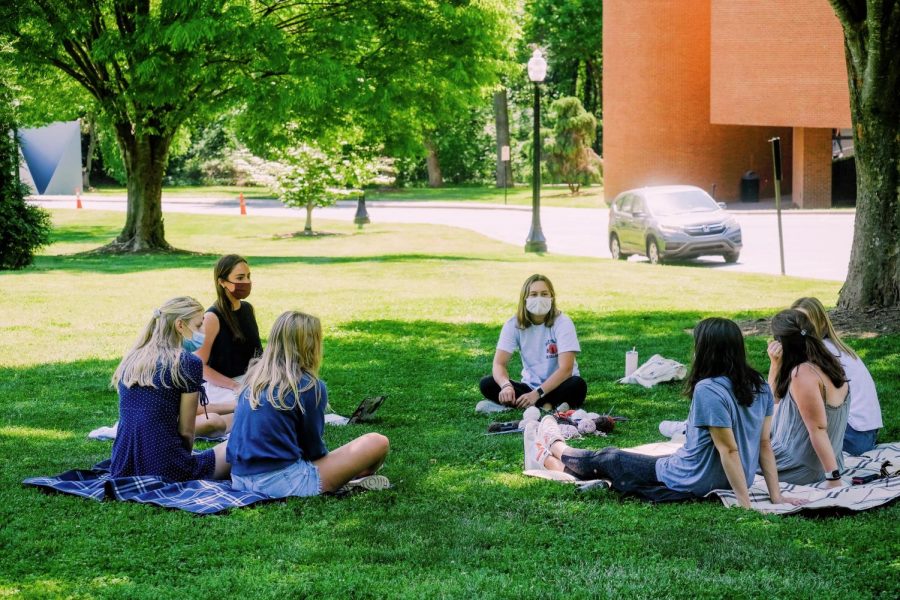 While many continue to actively protest their pro-choice or pro-life views, mutual respect and discussion is essential for progress.

Last spring on a Friday afternoon, a group of nine female Wake Forest University students sat in a circle on Davis field for two hours and learned how to knit. I was responsible for bringing these individuals together, for providing the knitting materials and for teaching each woman how to use the needles. For the hours that our hands knit one loop after another, we made conversation about the too-often hidden conversation of abortion.

This knitting circle served as my final sculpture project of the semester. When faced with the task of creating a site-specific piece of art my mind immediately went to the topic of abortion and women’s health. During the previous semester, I had finished a course in Bioethics in which we frequently discussed and debated the topic of abortion in terms of philosophical arguments and literature. I also had a nuanced personal history in ideas about abortion as someone who holds value in the seemingly contradicting spheres of women’s health, religion, and philosophy. In broader terms, I held a past of countless discussions among peers, debates among classmates, and wonderings within my own mind about the subject of abortion. Therefore, it felt as though this project was finally a time for me to explore the subject with my creative voice.

With only the preliminary idea of speaking about abortion through the process of knitting, the first stage of execution was one of research. I first stumbled upon the Freudian term unheimlich in a discussion about the strangeness of knitting in public. This term alludes to the discomfort caused by being out of phase, or by interiors becoming exteriorized or publicized. In other words, because knitting is stereotypically seen as an interior feminine activity, it creates discomfort in those who observe women knitting in public. I became enthralled by this idea of the uneasiness of a domestic craft made communal. I held onto this thought and kept researching.

I then quickly learned about past pieces of contemporary art that also engaged in women’s health with textiles and yarns. For example, the PussyHat Project, birthed in 2016 by the genius of Jayna Zweiman and Krista Suh, is a global women’s movement that utilizes masses of pink knitted hats at Women’s Marches to communicate solidarity and support. Another example is Faith Wilding’s Crocheted Environment (Womb Room) from 1972 in which she covers an entire room by draping crocheted webs of yarn, placing the viewer into an intricate simulation of the womb.

The act of knitting has been deployed in acts of activism and politics. In 2014 Taylor Payne and CheyOnna Sewell created a knitting collective with the mission of battling racial injustice. The activists used the form of a quiet and intimate knitting circle to discuss traumatic topics, yet the process of knitting as a forum for politics dates back to the 1760s.

During the American Revolution women boycotted British taxes by making handspun yarn and cloth. Furthermore, during the abolitionist movement, sewing circles became a safe space for exchanging anti-slavery ideas and for rebelliously engaging in politics. More recently, a project called Wombs on Washington knit wombs to encourage pro-choice voting in 2005.

Throughout the process of researching, my ideas began to fuse together organically and intentionally. I landed upon the overall mission of hosting a knitting circle among women of various ages, backgrounds, experiences and beliefs, in order to have a respectful conversation about uncomfortable topics, all while producing a final knitted piece. The purpose of my project would be to simultaneously bring a typically domestic craft into the public and a typically hidden conversation into the community. I then sought out women from various corners of campus to participate in the circle. I purchased the supplies and we met on a Friday afternoon to knit.

I began our gathering by emphasizing what I consider to be the most important aspects of the project: the practice of listening to one another with respect, honoring one with entirely different viewpoints than yourself, empathizing and learning. The aim of the conversation was not to win an argument, rather, the measure of success would be that each of us leave the circle having gained a new perspective.

I taught each woman to knit before we dove into discussing our previous exposures, either in education, personal history, religion or other, to abortion. As each individual took turns sharing their personal experiences we sunk into a rhythm of knitting. We entered a space of pure vulnerability. Our hands worked in pattern as our mouths dared to share our most intimate stories and thoughts. Our conversations roamed from expressing feelings of frustration at political divisiveness that has caused our generation to so quickly denounce respect for another human being to personal pains caused by peers, by teachers by churches or by social media.

We spoke about our sadness at a lack of sexual education in high schools, venturing to speak about the demand for abortions rather than just the means.

We asked questions and we listened. When does the right to life begin? What is the value of a human life? Why do women feel the need to obtain abortions? What is the correlation between disability and abortion? Race and abortion? Sex and abortion? Why does it feel like this issue is so divided? Why is it so hard to talk about these things? For two hours we knit together and we asked more questions than we answered. Slowly we realized that not one person solely identified as “pro-choice” or “pro-life.” Rather, we continually came back to the claim, “it’s not black and white.” Every participant left the circle with feelings of peace, thankfulness, and a willingness to continue the conversation.

In writing about the debate between pro-life and pro-choice I could lecture at you. I could write down every argument and debate I learned in Bioethics. I could quote psychological facts and I could cite literature and studies. I could yell and I could scream. But rather I will choose to sit and listen. I will choose not to force you into a label of pro-life or pro-choice but rather ask you about your experiences with abortion and why you believe what you do.

Throughout the process of my knitting circle, I realized that this issue is far too nuanced to associate with over-simplified and divisive language. We cannot continue to denounce the voice and value of others based on black-and-white terminology. Instead, we must choose to listen to one another, in spite of differing beliefs, and choose discussion over division. I urge you, fellow reader, fellow student, fellow human being, to be careful not to tune out the experiences of those whose beliefs may threaten your own. It is a dangerous line to abide by finite terms of what one believes about this issue, because as you may find, a respectful conversation with others will reveal that it is in fact not black and white.