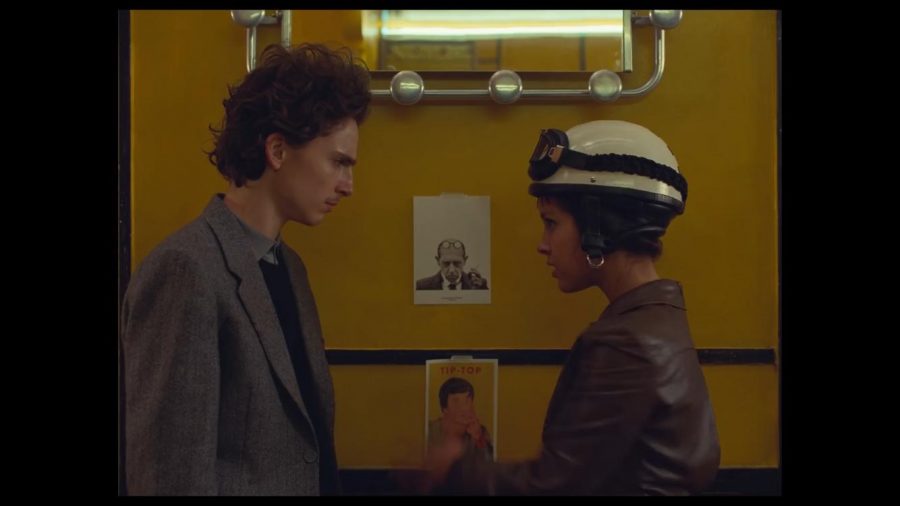 When I walked into the theatre last Thursday night, I carried with me astronomical expectations. I mean, Timothée Chalamet, Saoirse Ronan, Willem Dafoe, Bill Murray, Owen Wilson, Adrien Brody, Francis McDormand, Tilda Swinton, the list went on, all in one movie — how could it not be amazing?

I knew I was going to be treated to wonderful acting, colorful set design, symmetrical shots, and quirky characters, but I did not foresee being impacted by the movie in the ways I was.

“The French Dispatch” is Wes Anderson’s latest film. Set in the aptly named fictional town of Ennui, the film follows a cast of unorthodox journalists and their stories in the wake of the death of their Editor in Chief, played by Bill Murray.

What emerges is a video scrapbook. The stories that these journalists write are brought to life, and we see them interact with the people they are writing about, sometimes becoming a part of their own narrative in the process.

There is an introduction by Owen Wilson’s character, as he rides through Ennui, ruminating on how it has transformed over time. There is a story of an incarcerated artist who falls in love with one of his guards and accidentally invents modern art. There is a tale of anarchy and chess — a student-led revolution that ends before it even starts. There is the journey of a Chief and his heroics as he attempts to save a young boy from a kidnapping. All of these tales are set against the backdrop of The French Dispatch itself, enabling the writers to think about how they got their start at the company and their relationship with the Chief, to begin with.

What I love about this movie, aside from all of the typical Wes-Andersonisms that make for a great viewing experience, is how it takes advantage of structure and formatting. It is not just about the stories being told, but how they are told and how they relate to one another. Anderson uses just about everything at his disposal — black and white; bright, bold coloring; cartoon animation and outlandish visual effects — to create a picture that never stagnates or heeds to predictability

Moreover, in viewing the pieces both in their individual forms and together as a greater whole, different meanings arise. Personally, I quickly began to see a pattern of loving in the wrong way, or for the wrong reasons, and the consequences that follow.

I saw it in the Chief, as he continued to believe in his writers to the detriment of the paper; in Moses, the painter, as his unreturned desire for the woman who kept him in captivity led him down self-destructive paths; in Frances McDormand’s character, Fabian, who struggles to “maintain journalistic neutrality” while falling in love with Zeffirelli, the face of the student rebellion. It really became clear to me, though, in the final chapter, as I watched as the Chief consistently sacrifice and endanger himself to save a child and win the favor of his group. This story is especially poignant because the journalist who covers the story (and the Chief, himself, are foreigners to Ennui) they so desperately want to be accepted in the land that they love, and so they are willing to do anything.

Anderson left me the indefatigable feeling of helplessness that accompanies someone who knows that their love is unrequited, and at times, unwelcomed, but is nonetheless unable to alter the trajectory of their life.

I found the closing scene especially poetic because it was not until the chief dies and is laying stiff in his office that the people who worked for him began to acknowledge all that he had done for them.

Perhaps truly appreciating people who remain important characters in our lives is impossible.

Perhaps we tend to appreciate the people we shouldn’t.

My favorite of Wes Anderson’s extensive filmography has firmly remained “The Life Aquatic With Steve Zissou” (except for when it was “The Grand Budapest Hotel”). This, however, has changed.

“The French Dispatch” is Anderson’s funniest, most ambitious, and most creative project yet, and I can’t wait to see where it takes me on a second, and third watch. If you haven’t seen any of Anderson’s stuff, I would recommend checking out “The Grand Budapest Hotel” or “The Fantastic Mr. Fox”. If you have, I think you’ll find “The French Dispatch” to be a clever and cathartic expansion on the style you’ve come to know and love.