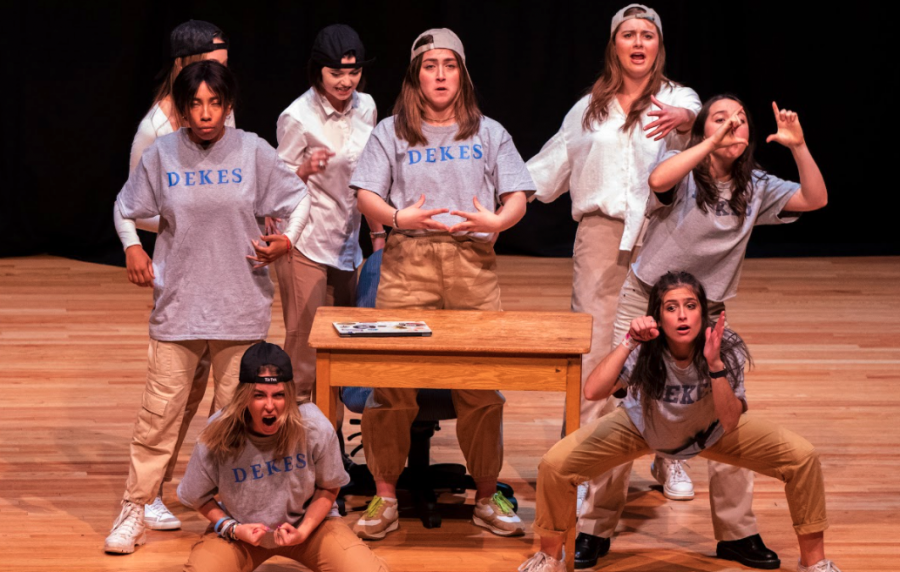 Both of the shows were completely sold out, as students packed into Scales Fine Arts Center to see the Banshees perform on their usual stage for the first time in almost two years.

According to freshman Banshee Margaux Ellis, the title, “ISOC XXVIII,” was both a nod to past performances and a revitalization of an outdated term.

The troupe opened with a skit revolving around a spelling bee inspired by the popular culture reference site, Urban Dictionary. Audience members erupted in giggles as Banshees scratched their arms awkwardly while poking fun at the recent surge of scooter-riding athletes and debating the formal definition of the term “narty.” Apparently, watching Wake Forest quarterback Sam Hartman faceplant would be a hit among the audience.

The following skit featured a “Sigma Standoff” and a Les Mis rendition by Yamas Mamas (formerly known as the Moe’s Bros). The ghosts of KSig past, present and future appeared to advise a rushee, Tiny Tim, who traversed the stage with an impressive medieval accent and ambitious fraternity dreams.

When asked about her favorite moment of the night, Ellis recalled a sketch set in a zombie apocalypse which forced ROTC students and sorority members to unite as they struggled to survive.

“It was so fun and exciting, and I thought it had so much potential on stage,” Ellis said. “There was a lot of movement on stage, too, which also makes for an exciting sketch.”

Ellis’ character, who sported Kappa Alpha Theta letters, engaged in a squabble with a fellow sorority sister — a chuckle-inducing commentary on the Greek ranking system.

However, some sketches turned the spotlight on more serious social issues, including one which mentioned a vulgar email sent by a Wake Forest fraternity that featured disturbing sexual imagery about female invitees. That incident sparked a multi-sorority boycott of the fraternity’s upcoming event, and a campus-wide conversation about recurring improper behavior within Greek life organizations.

The Banshees addressed the issue with their usual wit.

The skit in question featured a collection of performers in lettered t-shirts and baseball caps —  stereotypical fraternity uniform — huddled around a laptop while writing the now-infamous email. Participants shouted viciously sexist phrases and were met with enthusiastic high fives and proclamations of, “good one, dude!”

So, what made the skit comical instead of crude?

The “brothers” were all female.

“I thought it was executed in a humorous but proactive way that brought awareness to the issue that happened a few weekends ago,” said a female audience member who wished to remain anonymous. “I hope it encourages the fraternity brothers to be more aware of how they promote their events and how their wording affects other people.”

According to Ellis, this support for female castmates is reflective of the familial nature of the troupe.

“Banshees are more than performing on stage and writing funny sketches,” Ellis said. “We write outside of our meeting times together to come up with absurd ideas, have lunch together, and just chill together. We are less of a club and more of a group of friends that love to make people laugh and perform on stage. We care for each other, too, and always check in on each other.”