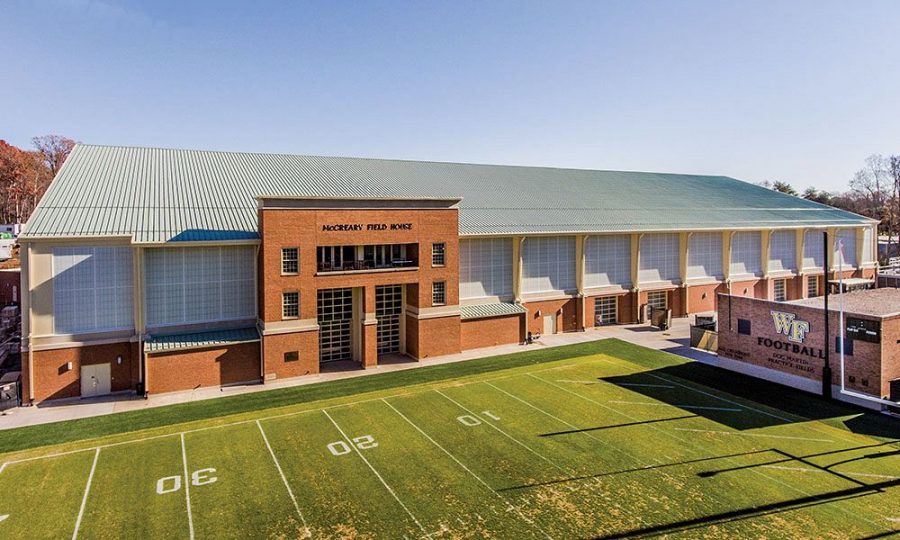 During the Deacs romping of the Blue Devils a few weeks ago, amidst the condom balloons and sea of black, the seemingly random words “Thank You Bob” flashed across the jumbotron. Being a child who still thinks that name is funny, I laughed. The university was about to announce that Bob McCreary — who I was looking at via the Bob McCreary Video Board — had just donated $20 million towards the construction of a new $38 million football complex. It was then that I stopped laughing.

I understand the importance of capitalizing on this historic season and capturing this momentum to propel the program forward. Dave Clawson has created a culture of excellence that will outlast Clawson himself. A state-of-the-art locker room and recovery facility would only catapult Wake Forest football into the upper echelons of the ACC, ensuring we would always be knocking on the door of a New Year’s Six bowl game.

But, as I stood in the student section that Saturday, all I could think about was that ginormous price tag. Thirty-eight million dollars. All donor money, as well. Old people donated $38 million dollars because our football team is good and they would like to keep it that way. They want to bottle the energy of the present for the future of Wake Forest.

But, what about the current Wake Forest?

In 1984, Boston College’s quarterback Doug Flutie threw a last-second improbable Hail Mary to stun the University of Miami. Although the game itself had no real implication on either team’s season, the Boston College admissions office would beg to differ. Over the next two years, applications rose 30%. Harvard researcher Doug Chung dubbed this “the Flutie Effect”, and later found that when a college football team goes from “mediocre to great” applications increase 18.7% on average.

Wake Forest received 11,945 applications for the 2020-21 school year. 18.7% of that is 2,234 applications. Let’s consider how much money the university would receive with this extra application boost, basing our calculations on the 2020-21 acceptance rate of 32.1%.

Even if the financial aid decreased the cost of attendance down to 66% of the original price — $52,998 — the university would recoup all $38 million dollars spent building the new McCreary Football Complex. In one year, the university could generate that much extra revenue because of this football season.

Don’t get me wrong, that is great. A great football team would lead to more television deals, more sponsorships, a booming Deacon Blvd. every Saturday and so much more money.

The university could use that money to do so many good things: building more dorms, improving the current ones, creating more scholarship opportunities, enhancing campus Wi-Fi, ensuring housing for international students over Winter Break during a global pandemic, increasing resources of the UCC and Student Health Services, improving the overall level of education and fostering more meaningful connections between the university and Forsyth County at large. In short, the revenue gained from the McCreary Complex would do wonders for our campus.

The problem is these issues are present right now — today. And, these pressing problems can be fixed with this donation, before construction crews break ground. Whether it is the supposed “lack of funds” or just overall apathy towards the issues, this recent announcement defies both excuses and feels like a betrayal to those who pay so much to be given so little.

Money will come next year because of the great football season, regardless of whether or not a new locker room is built. Money will continue to come long after this era when student needs are being valued over university profits.

I know that this expansion is funded entirely by donors, but that doesn’t mean Reynolda Hall has to act like Capitol Hill. Rearrange your priorities. Prioritize those who are here now. Enlist donors and earmark funds to fix current problems. Try not to focus solely on generating future profit.