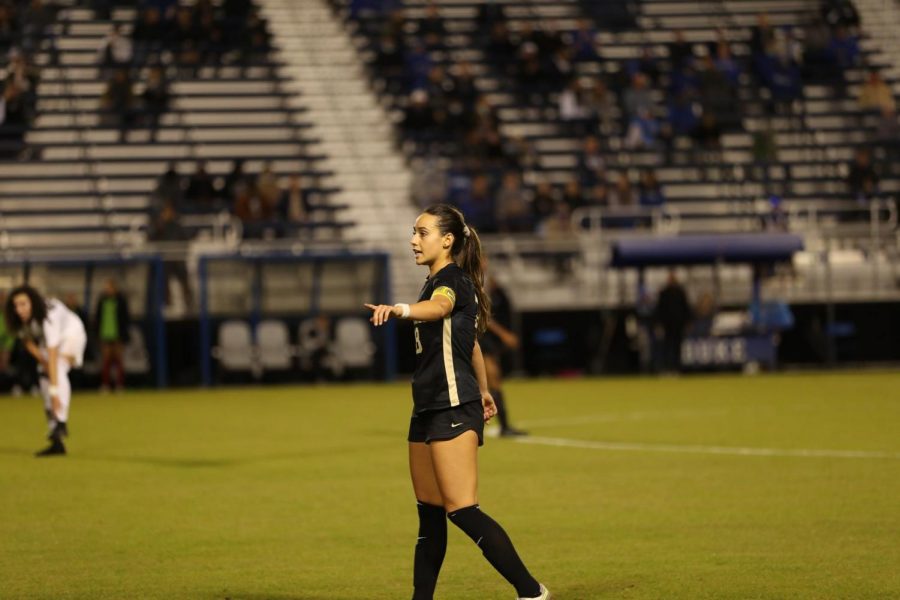 Sofia Rossi has played in 21 games this season and has totaled 1,539 minutes so far.

Redshirt senior Sofia Rossi has repeatedly proven she’s a crucial piece of the Wake Forest women’s soccer team this season. The Akron, Ohio native was rated as the No. 107 recruit in the nation by TopDrawerSoccer, as well as the No. 41 midfielder. To add to her impressive resumé, she was named Ohio’s Division I Player of the Year twice while in high school.

Rossi is having her best year yet, and she scored her ninth goal of the season in Sunday’s win against Harvard. This Friday, the Demon Deacons will play No. 2 seeded Michigan in round two of the NCAA Tournament. In Ann Arbor, Rossi hopes to once again help her team come out with a win and continue her successful senior season.

Christina DeNovio: When did you start playing soccer?

Sofia Rossi: I started playing soccer when I was four or five. I grew up with cousins who were older, and they all played at the college level. They were the ones who introduced me to the sport, because my parents never played. I would say they had a big impact on why I chose soccer.

CD: Why did you choose Wake Forest?

SR: For starters, it’s in the ACC, which is one of the best leagues for college soccer. And then, when I came to visit, just meeting the coaches and meeting the team — it might sound really cliché — but everybody was so nice and welcoming. Not even just from an athletic standpoint, but just walking on campus on a tour. Everybody was so friendly, and it really felt like a community. I think that is what made me gravitate towards this school rather than some of the bigger schools that I went and visited, where I didn’t get that same feeling.

CD: What was the transition from high school to college soccer like?

SR: It’s a little bit of a wake up call, honestly. Everything from a technical and tactical standpoint is just 10 times faster. You have to know what you’re going to do several plays in advance. In high school, you can kind of get away with not having the fastest reactions or the highest soccer IQ. The speed of play is what I would definitely say is the biggest difference.

I would also say physicality. In high school, you’re going up against girls, and in college, you’re going up against women. It’s different. I remember, the first time, my freshman year, I was on the field and had to check my shoulder so many more times than I did in high school. In college, you don’t get to have as much time on the ball, so you dribble a little less. Everything seems so much faster.

CD: What kind of injury did you sustain your freshman year?

SR: Freshman year I came in and wasn’t getting the playing time I wanted right away. Then, I began starting and playing a lot. Then, I broke my foot. I was out for the rest of that season. In the spring, I was training again. That summer, I went home and was playing with my summer league and refractured my foot in the same spot. So, I had to redshirt my sophomore year, because I wouldn’t have been back in time. My junior year was really my first full season. Senior year was weird because of COVID-19. So, this season is really like my second full season.

CD: Did you feel like you learned anything valuable during the time you were injured?

SR: Yeah, definitely. Obviously, I was really frustrated with the situation, but I really think it was a blessing in disguise. We were just talking about the transition from high school to college-level play. I think that injury was an opportunity that really helped me grow as a person and a player. I was away from home and facing adversity. In that kind of situation, you have to get mentally stronger. And then physically, it gave me time to really rehab and get stronger in areas that I wasn’t before.

It also made me appreciate the sport more — being on the sidelines and watching practice for several months but not being able to participate in it — it gave me a different perspective, and it helped me appreciate the opportunity to play more once I came back.

CD: You’ve scored several goals this season. What goes through your mind when you score?

SR: Honestly, I think the best thing for me before I shoot is to not think. If I do start thinking, I tend to overthink and then something goes wrong. So, for me, it’s just finding a mental calmness and not overthinking that helps me. And then afterwards I’m thinking, “Thank God that went in.”

CD: Now that you’re a senior, do you try to be a role model or leader to younger players?

SR: Yeah, I definitely think so. I would say our senior class as a whole has done a really, really good job with being leaders this year. Sometimes you have good cops and bad cops, but we don’t want the underclassmen to be scared of upperclassmen or anything. I mean, I think we demand respect, but we want the younger girls to know that they should feel comfortable coming to us to ask us questions, whether it’s regarding stuff on the field, or even off the field.

Our whole senior class has just done a really good job with stepping up, leading by example and keeping the morale high. I think everybody has a goal this season to go really far. In the past, we’ve always had that goal, but this year, I just feel like the hunger is there, and it maybe hasn’t always been like that in the past. I think everyone’s kind of bought into this idea that we actually do have the ability to do something big this year.

CD: How did it feel to beat Duke in the first round of the ACC tournament?

SR: That was huge because we played them this earlier year, and it didn’t go so hot. I think our mentality going into that game was that we have nothing to lose, we really believed in ourselves. We went in there not with a mentality of “oh, we’re just going to give our best.” We went in there thinking “okay, we’re walking away with a win.” And that’s what we did. And everybody — every single player, whether they played or not — thought that and totally bought in. I don’t even have words for it. It was just a really gritty game.

CD: What is the team focusing on going into the NCAA Tournament?

SR: With the NCAA Tournament, the whole bracket comes out. You can see, if you beat this team, you play this team, and then you’ll be matched up against this team. That can sometimes get overwhelming. We’re just trying to take it week by week, game by game, and go 1-0 each time. And that’s our focus right now. Each game, we have a goal, and that’s to win. And if we keep that up, it’s going to take us far. It’s important to not get distracted with who we could potentially meet up with down the road.

CD: What’s your favorite part about being on the team?

SR: The relationships with the girls. I see these girls at practice all the time, but I see them off the field all the time, too. We’re all just so close. We can talk to each other about anything — soccer, non-soccer, life, school. They’re some of my closest friends, and I don’t think that after these four years it’s just going to stop. I still talk to girls who graduated. These relationships are going to stay with me for life, hopefully.

CD: What are your relationships with your coaches like?

SR: They’ve really helped me fulfill my potential as a soccer player, but more importantly, as a person. They have really taught me about how to live a good life and be the best person I can be. They’re good role models, they’re good people and they’ve definitely gotten me ready for the next chapter after soccer.

CD: As you near the end of your college career, what’s been your favorite Wake Forest soccer memory?

SR: I think a lot of the girls would mention this: A few summers ago, we went to France for the World Cup. We got to watch a few games, and then we played a game there against one of their club teams. Then we did a lot of touring, and it was so fun. It was like team bonding on steroids. Being in France for several days together — I’ll never forget that. That’s definitely one of my best memories here. And then of course, beating Duke.

CD: What are your future career plans?

SR: I want to be a physician’s assistant, so after this season, I’ll be working towards getting my hours before I can apply to PA school. I would love to go to Wake’s PA program, but obviously, it’s very competitive, so I’ll just see where I can get in. After college, I’ll hopefully live a good life being a PA.