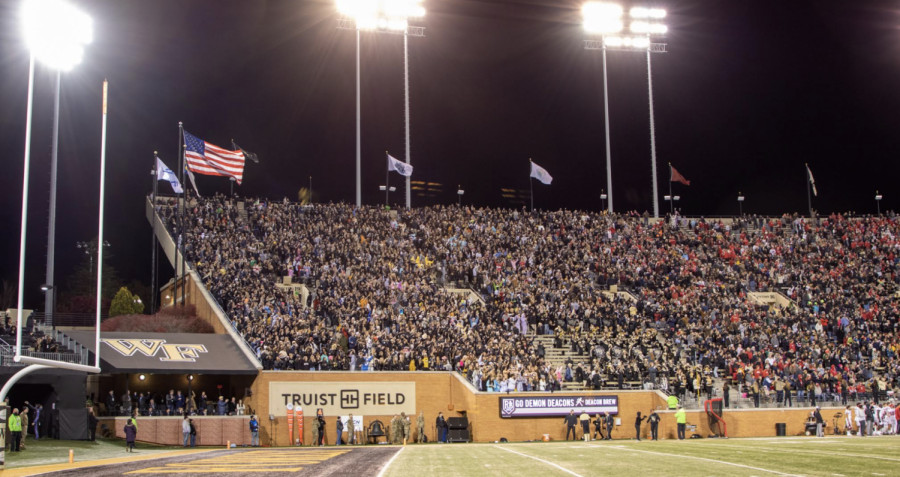 Wake Forest fans have high hopes for the 2022 season, starting with the Demon Deacon defense.

With 10 seconds remaining on the ticking clock, students began counting down the numbers. When the scoreboard hit zero, the chanting turned to cheers, and for the first time in years, students rushed the field.

The Wake Forest football team had won their biggest game in 15 years and put themselves in the driver’s seat to reach their first ACC Championship since 2006.

The win meant more than just a likely return trip to the ACC Championship, though. This was a win of grit, resilience and pride. Head Coach Dave Clawson recognized just how much went into the victory.

“[I’m] so proud of our team,” Clawson said after the game. [It] wasn’t our cleanest game. We turned the ball over, and we certainly had some special teams miscues, [but] that might be as hard as I’ve ever had a football team play for 60 minutes. The competitiveness, it was just an outstanding effort.”

The team secured the win in front of a sell-out crowd of 34,503 spectators, the largest since 2011. The student section, decked out in all-black and onesies for the second straight home game, was 4,584 strong. That number, which makes up 85% of the student body, marks the largest student crowd in the history of Wake Forest football.

“Tonight, just to have all the students and all the fans rush the field [and] to have a packed house, it was a big time college football game,” Clawson said. “And it was a big time environment. What a great job by our students, our fans. Everybody who showed out … they were great and added to the atmosphere.”

Unlike their play against North Carolina a week prior, the Demon Deacon offense started slow. Redshirt sophomore quarterback Sam Hartman looked out of sorts, missing many of his open receivers. On their first two drives, Wake Forest went three-and-out.

But on their third drive, trailing by only three thanks to several defensive stops, Wake Forest finally sputtered to life. With the aid of multiple NC State penalties, the Demon Deacons were able to move down the field.

On third-and-six, Hartman found his touch, throwing a ball up perfectly to redshirt sophomore receiver A.T. Perry in the back-right corner of the end-zone. Perry created space and was able to secure the ball with one hand.

On their next offensive drive, Perry nearly proved to be the downfall for Wake Forest. On two straight plays, he dropped passes that hit him in the hands. Hartman saved the drive on third down with a 15-yard run.

Later in the same drive, on third down, Hartman once again delivered, finding freshman receiver Ke’Shawn Williams over the middle. After the catch, Williams ran an extra 24 yards down to the one-yard line. From there, freshman running back Justice Ellison charged in for the touchdown.

With an offense that was stop-and-go for much of the first half, the Wake Forest defense — following a dismal performance against North Carolina —had to deliver. Leading 14-6, they came through.

With the Wolfpack driving, quarterback Devin Leary launched a pass to Joshua Pierre-Louis, who had a step on freshman defensive back J.J. Roberts. At the last second, Roberts undercut the pass and spectacularly secured the ball with one hand.

While the play proved instrumental for the defense, the positive effects did not last for long. On the second play from scrimmage on offense, Hartman gave the ball right back to NC State. Escaping to the left, Hartman short-armed a pass that was tipped at the line, falling into the hands of cornerback Shyheim Battle.

The interception marked the first of three Hartman would throw in the game, his most since the bowl game last season against Wisconsin. The first half of the game was arguably his worst performance since that contest as well.

“I don’t know if it was the weather or anxiety or what it was, but I certainly don’t feel like we played a very good offensive game tonight,” Clawson said. “We just weren’t as clean as we usually are. And, we threw picks. We threw three picks, which is on Sam [Hartman].”

With two minutes remaining in the first half, and with the Wake Forest offense still sputtering, the Demon Deacon defense made another game-changing play.

Inside Wolfpack territory, a completed pass to Devin Carter was ripped away by Roberts. Traveon Redd picked the ball up off the ground and sprinted down the left sideline to the five-yard line.

The play proved instrumental — on the first play on offense, Hartman ran the remaining five yards into the end zone to give Wake Forest a 21-6 lead.

With the defense playing well, mistakes elsewhere kept NC State in the game. After the touchdown, Wolfpack returner Zonovan Knight ran 72 yards through nearly every Demon Deacon to the 28-yard line. A Zion Keith tackle kept Knight out of the end zone.

But NC State only stayed out of the end zone for one play. On their first from scrimmage, Leary lofted a pass to the goal line, where Emeka Ezemie high-pointed the ball over senior cornerback Ja’Sir Taylor for the score.

Unlike the beginning of the half, the end finished with plenty of action. Within a minute and a half, the Wolfpack had another touchdown on the board, and had closed the Wake Forest lead to one point.

At the beginning of the second half, special teams once again proved to be pivotal. Knight returned the opening kick 100 yards for the touchdown, giving the lead back to NC State.

On the ensuing drive, four passes to Perry fell incomplete; yet, the offense still found a way to win the drive. After driving down the field, Wake Forest faced a fourth-and-nine on the 34-yard line.

Instead of settling for a long Sciba kick, the offense stayed on the field. The risk was rewarded, as a 29-yard reception by senior receiver Donald Stewart set up a one-handed touchdown grab for senior tight end Brandon Chapman. The touchdown was the first of his career.

Midway through the third quarter, another Hartman interception set NC State up to score once again, except kicker Christopher Dunn missed a field goal that would have tightened the Wake Forest lead to one.

After several missed catches, Perry was benched on the ensuing Wake Forest drive. In replacement, freshman receiver Jahmal Banks made multiple key contributions, hauling in a 23-yard completion and causing a holding penalty on another pass.

Even so, those efforts proved fruitless. Hartman, for the third time in the game, threw a bad interception. This time, he threw into double-coverage in the back of the end zone. The ball was picked off with one hand by Dereck Pitts.

In the fourth quarter, after a 35-yard Taylor Morin punt return, Ellison once again proved his worth with Christian Beal-Smith sidelined due to injury. On third-and-goal from the four yardline, Hartman dropped back to pass and floated a ball to Ellison, who had more than enough room to reach the end zone.

“He battled all game,” Hartman said. “Things weren’t going great for any of us early. He stuck to the plan, stuck to the coaching and really just battled hard.”

Down by 11, Leary took control of the offense, passing his way down the field. After three completions, Leary found Emezie open in the back of the end zone for the score. The two-point conversion brought the Demon Deacon lead down to three.

Against North Carolina, this was the moment when Wake Forest folded and all was lost. This time around, with a sea of black around them and everything on the line, the Demon Deacons flourished. They were resilient.

From there, Wake Forest ran the ball. Over five plays, the Demon Deacons gained 33 yards, concluding with a four-yard touchdown rush by Ellison.

With just over a minute remaining, there was simply not enough time on the clock for the Wolfpack. Despite scoring a touchdown, NC State could not recover the onside kick, and Wake Forest knelt the rest of the clock away.

Stewart described the end of the game as an unforgettable moment.

“It was one of the best feelings of my life, having Deacon nation behind us from start to finish,” he said. “After the game, when they all stormed the field, it was just an amazing experience. I’m so happy to be here at Wake Forest. Shoutout to Deac nation, they showed up hard.”

With the fate of their season in their hands, Wake Forest delivered. Now, to reach the ACC Championship, the Demon Deacons need to win one of their two remaining games against Clemson or Boston College. Their first test comes against the Tigers on Saturday. To Clawson, Clemson is just as important as NC State.