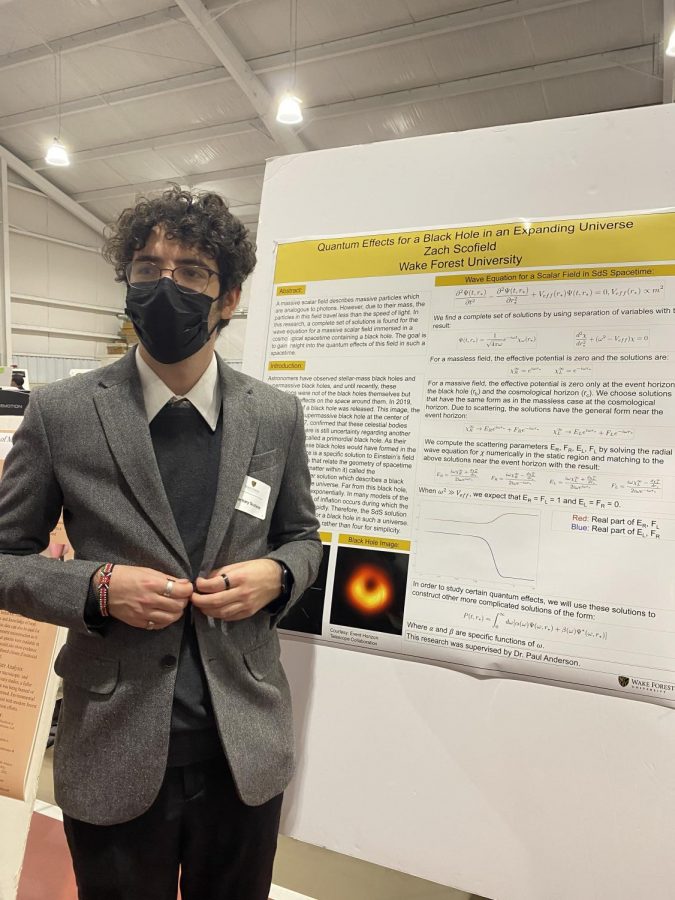 Zach Scofield is a senior from Rutherfordton, N.C. who is majoring in physics and minoring in mathematics. Over the summer, Scofield was awarded a URECA grant to study the quantum effects related to a black hole in an expanding universe. Beyond the classroom, Scofield is an avid music producer, who participates in Kenny Beats’ weekly beat battles. He is also the captain of the League of Legends team for the Wake Forest eSports Club.

What are you currently researching?

So basically, what I do is  I take a quantized scalar field, and I examine quantum effects of that field on a black hole that’s inside of a universe that is expanding exponentially outwards. So, that would mean this black hole would have to exist either at the beginning of the universe — during the Inflationary Epoch, as they call it — but that epoch may not have even occurred, or it could also exist at the late stages of the universe.

For example, our local group of galaxies is expected to collapse into a supermassive black hole. That black hole could be modeled by the solutions that I am using. So in the most basic sense, I am examining theoretical black holes, and it really is all theoretical and computational physics.

That does not seem like the kind of math that you can Google or plug into a calculator, so what does this research look like in the lab?

It’s a lot less glamorous than it sounds. It sounds really cool, and what I’m doing is really cool to me, but it might not be to other people. I am working with a program called Mathematica. I probably have hundreds of Mathematica programs, and I essentially just solve equations that can’t be solved analytically. To solve something analytically means someone can solve it by using known methods (like algebra), but I have to do numerical computations —  that’s pretty much what the work is. Half of it is theoretical physics in that we are using different strategies to come up with approximations for different physical aspects of what we’re looking at. The other half is me coding to analyze the expressions we come up with.

You recently received a URECA grant. Is that for this research?

Yeah, I started the research with Dr. Paul Anderson in the spring semester of my junior year, and then I decided to try and continue it over the summer.  I got accepted for the URECA grant so I can do that. The entire summer was just spent doing this research work every day, and I’m still continuing.

Eventually, I hope to write a paper on it and do my senior thesis on the same topic. I also want to present at the meeting for the American Physical Society. I don’t know if I’d do that virtually or in person, though.

It’s a big meeting. The American Physical Society is a big group. They give a lot of opportunities for undergraduates to present. It would be a big honor for me to be able to present at a huge conference like that. I would probably be presenting like a poster or giving an online talk if I’m not able to go in person, but that would still be a big accomplishment for me. That’s the goal.

What are your plans post-graduation? Do you want to pursue astrophysics?

I’m applying to graduate school, and I’ve been trying to decide between observational astronomy — which involves telescopes and data collection — or theoretical cosmology — which is purely theoretical physics that has to do with the beginning of the universe.

You’re very interested in music. What is the connection between that interest and your scientific endeavors?

There’s an interesting connection. I remember in electronics — the one physics course you have to take — we talked about all the different types of filters for electronics. There are high-pass filters, low-pass filters, a lot of different types that filter different aspects of electronics like voltage or frequency. There’s the same exact thing in music, and when I’m producing something, I use something like an equalizer, and I have the audio range for frequency. I use a low-pass filter if I want to cut off the highs of the frequency or a high-pass filter if I want to cut off the lows.

There’s a lot of parallels, but in all honesty, a lot of it comes from wanting a creative outlet when the work I do is largely not creative. Physics is probably the most literal science, and there’s not much room for interpretation. People have new ideas, and that comes from interpreting things in different ways, but physics really is equations and math and very concrete things. Music is an outlet for me to create things that are different, there aren’t really any set rules.