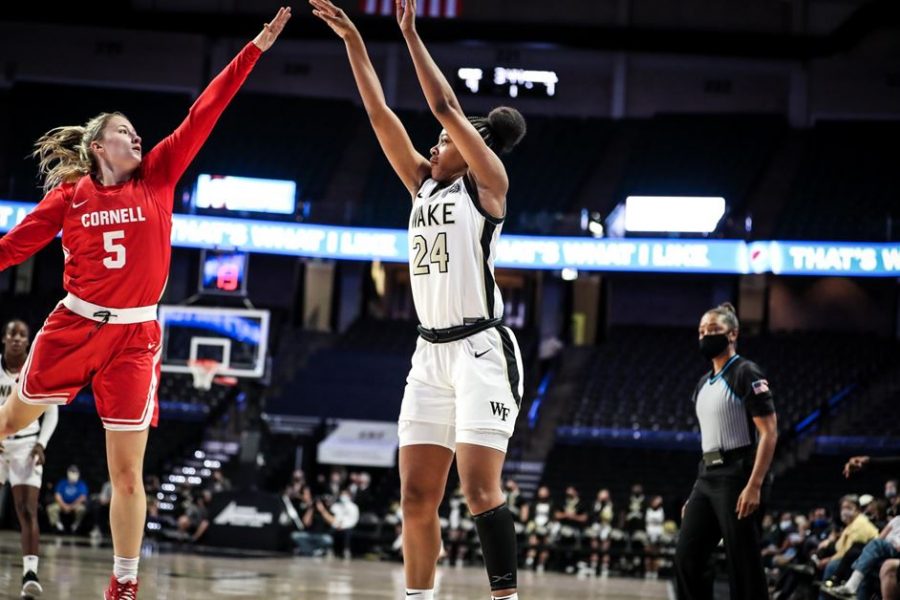 After women’s basketball reached their first NCAA Tournament since 1988 — their second appearance in program history — Wake Forest Head Coach Jen Hoover stated that the expectation for the upcoming season was to go right back.

“We expect to be back in the NCAA Tournament,” Hoover said. “This is the new standard. Now, every player that comes into this program is not going to have to just believe [they can make the tournament], they’re expected to accomplish it every year.”

This past week, the Demon Deacons returned to the court for the first time since. In their first three games, the team lived up to Hoover’s expectation, defeating Mercer, Cornell and UNC Greensboro.

After trading one bucket each to begin the game, Mercer scored 12 straight points. In turn, Wake Forest responded with a 7-0 run to shrink the deficit to five.

In the second quarter, Wake Forest found their stride on offense, going on three subsequent runs — 6-2, 7-0 and 11-0. During the quarter, the Demon Deacons hit 11 of their 16 free-throw attempts, and held Mercer to just 23% from the field. These runs allowed Wake Forest to enter halftime with a 32-29 lead.

In the third quarter, Becker led the charge for Wake Forest, scoring the team’s first six points. Those points were part of a 9-0 run that extended their lead to 11, the largest of the game.

Leading 50-41 going into the fourth quarter, the Demon Deacons allowed Mercer back into the game. After their lead was cut to six, Morra sealed the deal for Wake Forest, scoring seven of their last 13 points to give the Deacs the victory: 68-55.

Three days later, Wake Forest returned to the LJVM Coliseum for the first time to face Cornell. Spear led the Demon Deacons with 32 points, becoming the first player to score over 30 since 2015.

The sophomore went 12-16 from the field, including seven made three-pointers, tying a career-high.

To begin the game, Wake Forest jumped out to a 7-2 lead, which included five points from Spear. After Cornell evened the score at seven, the Demon Deacons went on an 8-2 run to close out the quarter.

The second quarter was highlighted by nine straight points scored by Wake Forest, including a three-pointer and coast-to-coast bucket off the hands of Spear. After hitting a pair of layups, Spear closed the half with her third three-pointer of the game, giving Wake Forest a 29-19 lead at the break.

The first half featured 15 points from Spear, and the Deacons holding Cornell to 33% shooting.

After closing the Wake Forest lead to five in the third quarter, layups from junior guard Alexandria Scruggs and freshman guard Elise Williams extended the lead back to nine. A buzzer-beating three from Spear further widened the advantage to 12 at the end of the quarter.

In the fourth quarter, Wake Forest put away the Big Red with an 8-0 run, which gave the Deacons breathing room to close out a 64-42 victory.

In what proved to be the toughest game of the three to open the season, Spear once again led Wake Forest to victory with 24 points when UNC Greensboro traveled to the Joel on Nov. 14.

The Demon Deacons’ defense also was a big factor in the win, forcing 19 turnovers while holding the Spartans to 34% from the field and 0% from behind the three-point line.

After trading points for the opening six minutes, Wake Forest held UNC Greensboro scoreless for the final four of the first period. The defensive stand allowed the Demon Deacons to carry a 10-6 lead into the second quarter.

Leading 17-10 with seven minutes left in the second quarter, Wake Forest embarked on a 7-2 run to extend the lead to 12. The Deacons carried the healthy edge to the end of the half, entering the break up 28-18.

In the third quarter, though, the Spartans came out swinging, scoring 10 straight points to even the score. After trading baskets, UNC Greensboro entered the final act with a one-point lead.

After the Spartans opened the scoring in the fourth quarter, Spear led the charge for the Demon Deacons, putting in two straight contested buckets. Williams also connected on a mid-range jumper to give Wake Forest a 42-39 lead.

From there, the Demon Deacons surged ahead with a 10-0 run, securing a hard-fought 56-45 victory. After the game, Hoover said she was impressed with the way her team fought through a tough opening week.

“It was a tough game, but we are in the midst of a tough stretch,” she said. “We played three games in the first week of the season. I am really proud of our grit. When our backs were up against the wall, we did what we had to do to earn the victory.”

This week, Wake Forest will continue their non-conference schedule. Looking to move to 5-0, they will face off against Charlotte on Thursday, then East Carolina on Sunday, both at home.