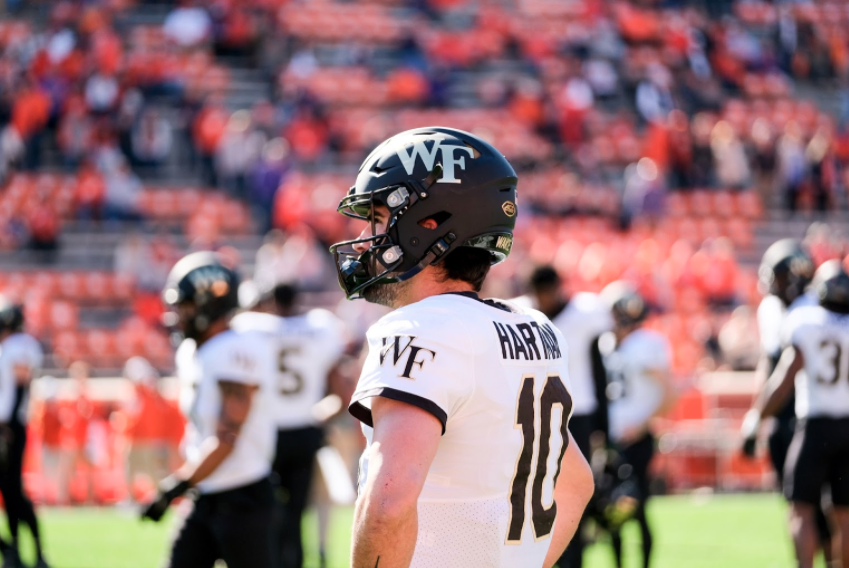 For the third week in a row, students rushed the field at the conclusion of a Wake Forest football game. The problem for the Demon Deacons — they weren’t at Truist Field, as they were the week prior. They were in Clemson, S.C.

In a game where a Wake Forest win would have confirmed a return to the ACC Championship for the first time since 2006, the team struggled to play up to an all-star lineup and a raucous crowd, losing 27-48 to the Tigers.

Despite the disappointment, Wake Forest still has the same path as before to reach the ACC Championship — win, and they’re in. Lose, and the Demon Deacons would miss out on their best chance at a championship in over a decade.

Head Coach Dave Clawson’s postgame comments reflected both his disappointment in the loss, but also his hope for what is still to come against Boston College on Nov. 27.

“Obviously, we’re disappointed by the result,” Clawson said. “Clemson outplayed us, outcoached us, and they took advantage of our mistakes. I thought our team played hard and never quit. However, we just made too many mistakes.”

Clawson continued: “We have to bounce back. We have a championship game next week at Boston College. We will look to correct a lot of the mistakes and get our team to bounce back.”

Early in the game, the Clemson defense imposed their will on the Wake Forest offense, consistently beating the offensive line and getting to redshirt sophomore quarterback Sam Hartman. On the Demon Deacons’ first two drives, Hartman was sacked three times. He was sacked another five times during the remainder of the contest.

After the game, Clawson was quick to shift blame away from a depleted offensive line, which was without starting center Michael Jurgens.

“Obviously, not having Michael Jergens hurt us,” Clawson said. “We’re clearly a better team with [Jurgens], but, you know, a center doesn’t cause you to fumble the ball or miss tackles.”

To their credit, the Wake Forest defense held their own early on against quarterback D.J. Uiagalelei and the Tiger offense. On their first drive, the Demon Deacons held Clemson to a 50-yard field goal from kicker B.T. Potter.

On their second defensive drive, Wake Forest squandered two opportunities to get off the field. Early in the series, an underthrown pass from Uiagalelei was nearly intercepted by freshman defensive back Gavin Holmes. Two plays later, on third-and-eight, the Demon Deacons appeared to have gotten a hold of Uiagalelei for the sack, which would have forced a punt, but he broke free from the arms of defenders Rondell Bothroyd and Miles Fox. As he emerged, Uiagalelei looked upfield and launched a 52-yard downfield pass to wide-open receiver Beaux Collins.

From there, Wake Forest once again appeared to have a chance to stop the Tigers, this time on the goal line. On three consecutive downs, the defense held true, but on fourth down, running back Will Shipley hurdled the defensive line for the touchdown.

In the beginning of the second quarter, the Wake Forest offense finally began to find its rhythm. In six plays, Hartman converted five passes for 58 yards, including three completions to redshirt sophomore receiver A.T. Perry.

At the Clemson six-yard line, though, the Demon Deacons could not convert. Two missed passes to redshirt junior receiver Jaquarii Roberson forced kicker Nick Sciba on to the field. Sciba knocked in the attempt for three points.

Only leading by a touchdown, Clemson manipulated a weak Wake Forest run defense to their advantage. On an 11-play drive, the Tigers rushed the ball eight times for 45 yards. To score, Shipley passed the ball to tight end Davis Allen for the two-yard touchdown.

On the ensuing drive, Hartman kept Wake Forest in the game with his arm. Three consecutive receptions to Roberson for 50 yards moved the Demon Deacons to the goal line. From there, redshirt sophomore running back Christian Turner converted on third down for the touchdown.

After the score, and now trailing by seven, the Wake Forest defense made a potentially game-changing play. On the third play of the drive, a Uiagalelei pass was tipped and intercepted by freshman defensive back Malik Mustapha. Unfortunately for Wake Forest, in an attempt to even the score before halftime, Hartman himself was intercepted.

Once again, to begin the second half, the Wake Forest defense made a big play to give the offense a chance to even the score. After a lengthy drive that saw Clemson reach the Wake Forest seven-yard line, Uiagalelei’s backwards toss to Pace was caught in mid-air by Bothroyd, negating what most certainly would have been a score, and giving the ball back to the Demon Deacons.

But, similar to at the end of the first half, the Wake Forest offense ruined another prime chance to level the score. On their first play from scrimmage, Turner fumbled the ball right back to the Tigers. Three plays later, Clemson was in the end zone and again up by 14.

On the ensuing drive, Wake Forest again looked to be floundering on offense. With Hartman’s helmet coming off on second down, backup quarterback Michael Kern was forced to enter the game on a daunting third down.

Kern responded to the pressure, tossing a 58-yard pass to Perry to keep the drive alive. Wake Forest was unable to convert in the Clemson red zone, though, forcing them to settle for a field goal.

Following the score, the Tigers did not back down. After an 18-yard completion to Shipley, Uiagalelei hit Collins in stride for a backbreaking 58-yard touchdown to extend their lead to 18.

On the first play of their response drive, Hartman fumbled the ball, and after five straight rushes, Clemson returned to the end zone, putting Wake Forest on the ropes with under four minutes remaining in the third quarter.

Following the game, Hartman spoke on the costly turnovers in the third quarter.

“That was the game right there,” Hartman said. “You can point fingers, but [the turnovers] can’t happen. You play a good team, like Clemson, they’re gonna capitalize on them.”

Despite the scoreline, the Demon Deacons did not give up. Over the course of four minutes, with interspersed passes from Hartman and rushes from freshman back Quinton Cooley, Wake Forest moved 75 yards down the field. With a seven-yard rushing score from Cooley and a missed two-point conversion, the Demon Deacons trailed by 19, holding on by a thread.

With 14 minutes remaining, Clemson went to work draining the clock. The Tigers ran the ball on 10 straight plays for 57 yards, taking seven minutes off the scoreboard and adding three points in the process.

Trailing by 22, the Demon Deacons had to move quickly. Over the course of two minutes, Hartman completed six passes for 78 yards, including a touchdown pass to redshirt sophomore tight end Blake Whiteheart. A two-point conversion left the Deacons trailing by 14.

But the Tigers would not be denied the upset. After an unsuccessful onside kick, the Tigers ate away time running the ball. While squeezing two and a half minutes off the clock, Clemson added another touchdown from Shipley.

In a clear effort to avoid further injuries in the game, Clawson waved the white flag, running out the remaining two minutes of the game clock, and giving the Tigers a season-defining 48-27 victory.

Despite the loss, historic possibilities remain. With a win against Boston College on Saturday, Wake Forest would return to their first ACC Championship since 2006. A win there would most likely see the Demon Deacons reach a New Year’s Six Bowl.

For Hartman, even given this painful loss, that promise gives him hope.

“[The loss] stings, it burns,” Hartman said. “You would have loved to get this one. [Clemson] came to play. You just have to go 1-0 next week. [Playing for a championship] is the whole thing. We have to rally the troops. We’re 9-2 going into Boston College and playing for an ACC championship. I can’t tell you that I won’t be excited and fired up. That [has] to be the mentality.”