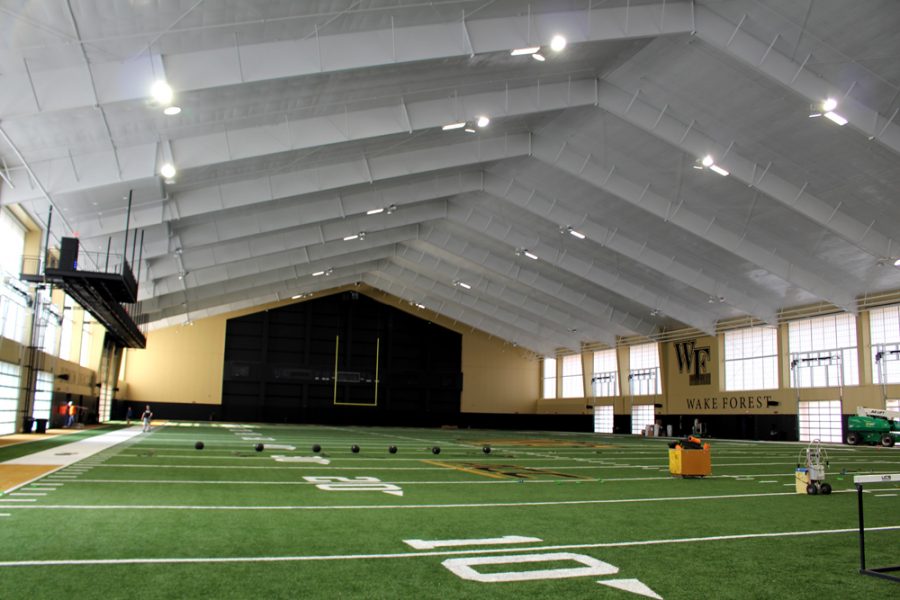 Rap music blares through the vast open space as the football team begins their afternoon lift.

Wake Forest Football is imprinted in gold on every color-coded weight plate. Goal posts are suspended from high-reaching ceilings. Natural light brightens the field, a trait created by a translucent Kalwall window system.

After 18 months of construction, the new, state-of-the-art indoor-practice facility located behind  the Miller Center is open for sports practices and conditioning.

The building contains 120 yards of indoor turf and is modeled to replicate BB&T field. Head football coach Dave Clawson said the facility has been monumental for recruiting, as well as the team’s performance.

“We have a beautiful stadium but never had anything on campus we were able to show recruits,” Clawson said. “Nothing nearly as impressive as this.”

The building is also temperature controlled for indoor workouts-a trait that Clawson pointed to as a “game changer” during unpredictable weather.

“Now we can also work on skills all year long,” Clawson said. “For example, we could workout this morning when last year would’ve had to cancel because it was so cold. We’ve missed so many practices in my two years at Wake, but now we can practice regardless of weather-no excuses.”

Before transitioning the football team to work out in the McCreary Field House and also moving the basketball and baseball team to new facilities, 16 athletic teams shared one 7,000 square foot facility. Team workouts were an “absolute nightmare for scheduling,” according to Barry Faircloth, associate athletic director for development.

“The existing space wasn’t practical and was probably one of the worst of Division 1 football programs,” Faircloth said.

Although Faircloth said this facility will compare to other facilities across the country, he also said it will stand out. “What is most unique about this building is its location,” Faircloth said. “It doesn’t disrupt campus, but it is still so conveniently located-which is different from most other schools.”

In the first phase of the building’s usage, temporary strength and conditioning stations are dedicated for football use only. Eight different weightlifting racks are set up for skills training, so that football players can work in two different groups when they used to work in at least five, according to Faircloth. Decreasing transition time between sets has increased the team’s efficiency.

Kendall Hinton, who had a breakout freshman season at quarterback, said the weight room equipment is his favorite feature of the facility.

“It’s given me the ability to work out and get extra time practicing and that was something I wasn’t able to do last year,” Hinton said.

Fundraising for the second phase of the $58 million project is underway. The second phase includes the building of a Sports Performance Center that will attach to the McCreary Field House.

It is set to include offices that will overlook the indoor field.

The second phase is expected to break ground in June or July of next year, according to Faircloth.

The Sports Performance Center will adjoin to the existing far wall of the Field House, beyond the multiple viewing platforms lining the fields that are for filming and coaching purposes.

The far wall will also be made of brick once completed, mirroring the opposite side.

“It’s the element of pride this time around,” Faircloth said. “It used to be that there were all different strength coaches using the same facilities, and weights were misplaced everywhere and that kind of thing. Now everything says Wake Football.”