In the aftermath of the Capitol riot, politics professors retool the teaching of American democracy 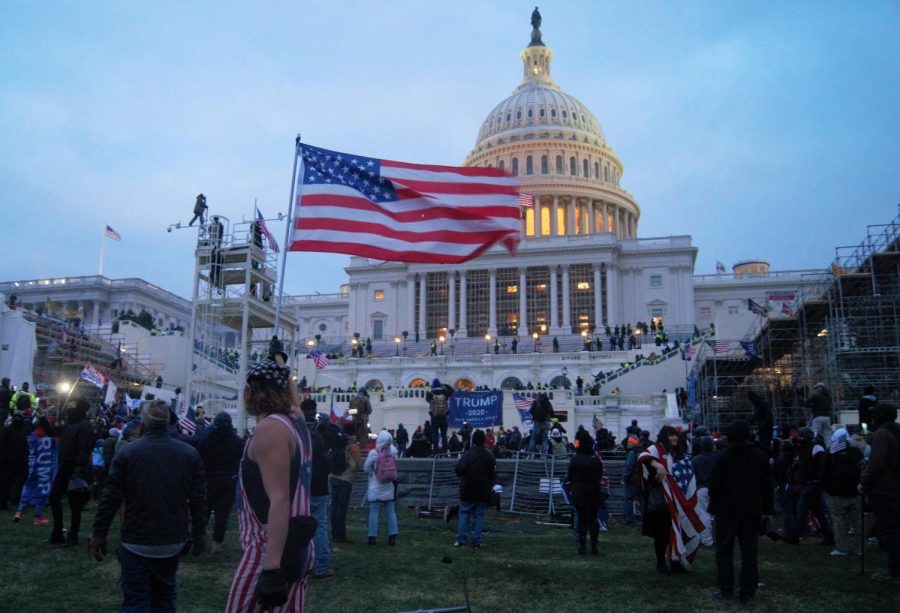 Supporters of President Donald Trump gather outside the Capitol to protest the certification of President Joe Biden's electoral victory.

On a chilly October morning in Dr. Sara Dahill-Brown’s Economic Inequality and American Politics class, my classmates and I were greeted by a slide featuring an image of the Jan. 6 insurrection at the U.S. Capitol. Brown be- gan their lecture by telling the class that they normally let the class debate whether American politics were broken, but after the Capitol riot, they were skipping the debate and stating the fracture outright.

That is the impetus for this story. There is no doubt that the events of Jan. 6 opened many Americans’ eyes to the flaws in our political system — but, did the Capitol riot change how politics professors teach American politics? Moreover, did it change how politics students conceptualized politics?

Dr. Zachary Scott teaches what he calls a “trifecta” of courses relevant to Jan. 6. He teaches a class on conspiracy theories, a class on the American presidency and a class on media politics. The insurrection has played heavily into at least one of his classes.

“In my political misinformation and conspiracy theory class, I have my students working on research projects throughout the semester; specifically, I had them doing projects about Jan. 6, and so they all came up with their own research questions for that,” Scott said.

Scott also began focusing on Jan. 6 in his own research — analyzing Republican attitudes toward Trump and the insurrection on Twitter.

Wise also altered the classic order of her intro courses, which usually start with an explanation of institutions like the presidency. Not after Jan. 6, though.

“I wanted to present these institutions as fundamentally contested, as fundamentally constructed and also as be- ing implicated in the politics of white supremacy,” Wise said. “So I did very conscious work early in the semester to discuss things like positionality and intersectionality; and to give students theoretical tools like Racial Contract Theory so they would be able to identify the mechanics of how white supremacy functions as a political system.”

Wise said that students also seem more interested in understanding whiteness and white supremacy in the aftermath of Jan. 6.

“I think when we were talking about polarization, there’s a usual set of topics and a study of how polarization has been increasing for decades,” Morone said. “But, now there’s this additional chapter to that conversation about this further escalation in which people really start engaging in conflict beyond our normal political system.”

Politics major and senior Rory Britt also noted polarization as one of his main takeaways from the events of Jan. 6.

“Before Jan. 6, I truly felt that nearly any political disagreement between the left and right was surmountable with words. Now, I find that there truly is a significant segment that will assert its beliefs through any means, particularly violence,” Britt said.

Other professors are also teaching about this form of non-normative mobilization, but are more interested in why people are mobilizing in this way. One such professor is Dr. Andrew Proctor, who teaches a class on political parties.

“I find students are really engaged with trying to understand what is bring- ing different people or different parts of society out to the streets and then also thinking about both the democratic and non-democratic aspects of those movements,” Proctor said. “So, what does the mobilization of these citizens on Jan. 6 tell us about how we understand democracy in this country?”

Ultimately, professors have taken this moment to reaffirm the importance of democratic citizenship.

“I think Jan. 6 created new openings for engaging students on what it means to live in a democratic society — or a society that purports itself to value democracy,” Proctor said. “It was a way to invite students into thinking about those big questions we have about what kind of society and world we want to live in.”