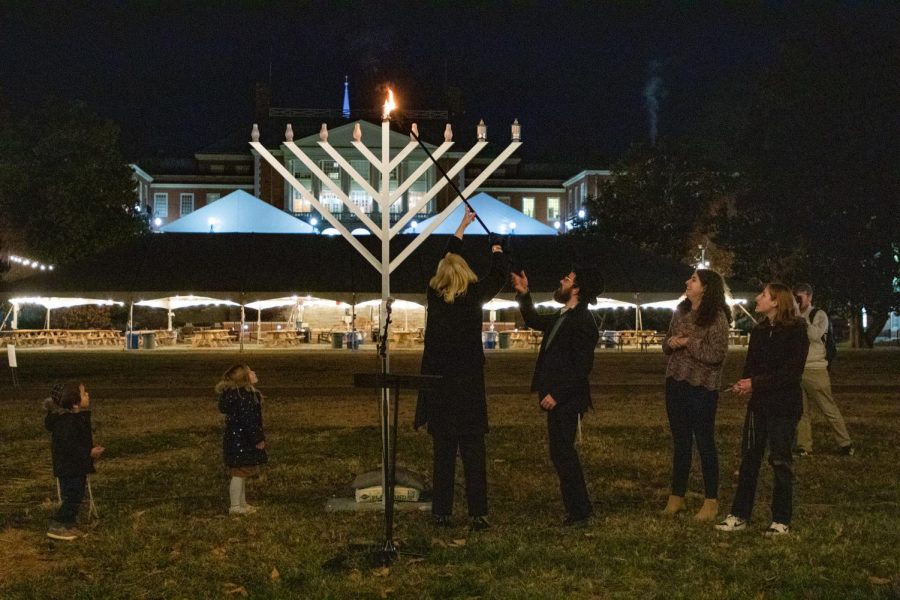 When students went home after Thanksgiving break last year and did not return for the end of the semester, many beloved winter traditions were put on hold. There was no Lighting of the Quad, Lovefeast was conducted virtually and Hanukkah festivities were held at home. But now that campus will be full of students yearning for a bright outlook during the end of the semester, winter celebrations are back in full swing.

This past Monday, Nov. 29, marked the second night of Hanukkah and the first menorah-lighting ceremony hosted by Wake Forest Jewish Life. Over 100 members of the Wake Forest community, including students, faculty and President Susan Wente gathered on Manchester Plaza around a giant metal menorah, an inflatable dreidel and tables of latkes and jelly donuts.

“I think we learned two things this year — Wake Forest is a football school and a Jewish school,” Rabbi Levi Gurevitz, co-director of Chabad at Wake Forest and owner of the menorah, said regarding the large turnout on a below-freezing night.

“The Jewish community on campus is a little small, but it’s definitely strong,” Sadikman said. “We have a lot of people who consistently show up, and it’s really exciting to see everybody come because we did not think it was going to be this big. It’s very exciting.”

In addition to the remarks from Gurevitz, Associate Chaplain of Jewish Life Gail Bretan expressed her gratitude to students who came out to celebrate. Wente also spoke before lighting the middle candle, and Dean of Students Adam Goldstein led prayer during the lighting of the remaining two candles.

“The thing about Hanukkah that’s interesting is that when you light a candle, the flame of the first one is not extinguished,” Bretan said. “The fact that we’re all together and we are all sharing our flames, it’s beyond belief.”

Throughout the week Hillel will host more celebratory events, like the Dec. 3 Hanukkah party, “events  in their lounge,” complete with more latkes and jelly donuts.

Tuesday evening saw the return of the Lighting of the Quad ceremony, as luminaries lined the edges of the grass and string lights adorned the trees already covered with toilet paper. Organized by the Student Union, the nearly two-hour-long ceremony had a capella performances and a speech from Wente. Students were able to grab cups of hot chocolate as they stood around the front of Reynolda Hall admiring the music and bright lights.

Sophomore Jiayi Zhou helped organize the event and was excited to have the Wake Forest community celebrate in person again as it “allowed people to interact with each other and celebrate this festival season together.”

Another tradition returning to campus on Dec. 5 is the annual Moravian Lovefeast in Wait Chapel. Different from past celebrations, this year’s Lovefeast will only be available to Wake Forest students, faculty, staff and invited guests to mitigate potential viral transmission into the Winston-Salem area. Because of the decreased number of guests, there will only be one service at 7:30 p.m. Overflow seats will be available in Brendle Recital Hall.

“The Lovefeast traditionally has been an embodied experience,” University Chaplain Timothy Auman said. “You engage all of your senses. Your senses of taste and smell and sight and hearing with the smell of beeswax candles, the traditional Moravian coffee, the Lovefeast buns, and then the incredible music. And the music this year is just going to be remarkable.”

For the first time, the Wake Forest Gospel Choir will be joined by the Winston-Salem State Singing Rams, as well as by select instrumentalists.

Auman did caution that the sense of taste will have to take a backseat during this year’s ceremony, as coffee and bread will not be served to stay in compliance with university mask policies. Instead, there will be a reception on Hearn Plaza prior to the official ceremony for students to attend before doors open at 6:30 p.m.

“There’s something about the Lovefeast that is transformative,” Auman said. “It’s healing, which seems especially important given what we’ve all gone through over the past 20 months.”

Auman continued: “Doing Lovefeast in person is very different than celebrating from a distance or celebrating virtually. You can gather people around you and celebrate the Lovefeast via live stream, but to do it in person really is quite remarkable. The Lovefeast itself acts upon us in different ways and that can be just a lovely moment.”