The Reynolda Campus has seen the adverse effects of climate change 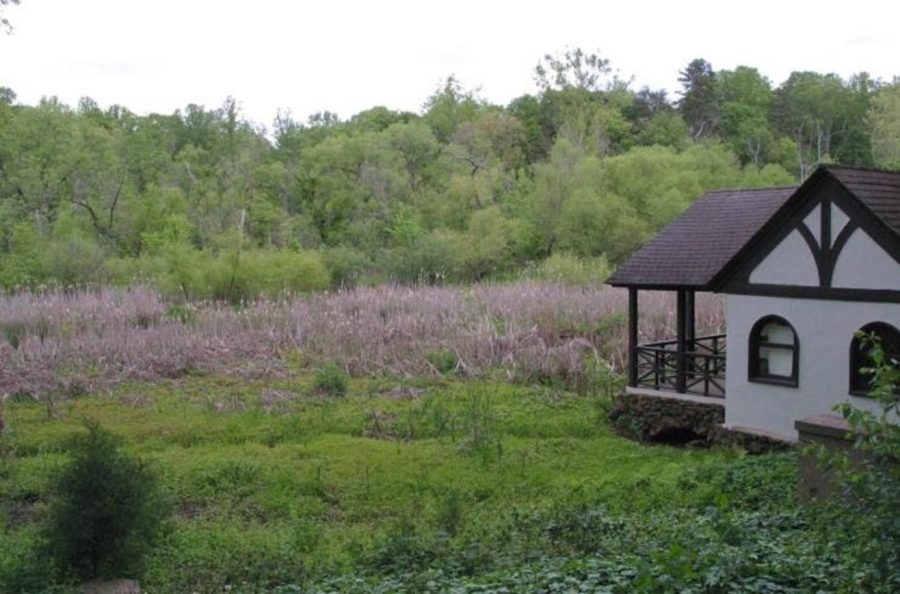 Over the last 50 years, Lake Katherine has slowly transformed from a sizeable lake into a more grassy wetland that now spans the area surrounding Reynolda Village.

When it comes to long periods without rain, extended warm seasons and other climate-related issues, Wake Forest has seen it all. But Wake Forest is now putting together action plans to make campus more climate-resilient.

The university is developing plans to reach campus-wide carbon neutrality by 2040, building off the momentum of the 30% reduction in the university’s greenhouse gas emissions since 2007. However, this is a daunting task. Wake Forest and other universities are trying to solve a problem that has been developing for centuries in just a few decades.

Recent awareness and acceptance of climate change as a scientific fact in the news cycle have aided progress.

“Did I ever think, when I got into this business, that the words ‘climate change’ would be in the news every day? Absolutely not.” Director of the Office of Sustainability Lindsay Batchelor said.

Climate change has already taken its toll in Wake Forest’s own backyard. The increase in frequency of natural disasters within Wake Forest’s ecosystem and the destruction of Lake Katherine in Reynolda Village are just two detrimental effects on a long list of many more. Although Wake Forest has learned it cannot stop climate change by itself, the university now knows that it can be a leader in sustainable higher education by making climate resiliency a priority.

The Past: Wake Forest before Climate Change

Climate change is not a one-trick pony. Wake Forest has already encountered a multitude of climate-related shifts that have dramatically altered the landscape. One of the most striking changes that makes the area surrounding campus almost unrecognizable since the 20th Century can be found in both Reynolda Village and Lake Katherine.

Phillip Archer, the Betsy Main Babcock Director for the Reynolda House, spearheaded an exhibition at the Reynolda Museum of Art called “Reynolda at 100: Lake Katherine”, which details the shifts in Lake Katherine’s landscape over the past century.

“The biggest change is the shift in the type of ecosystem we have,” Archer said. “Lake Katherine was a 16-acre lake that was used for irrigation and a recreational outlet to those who worked in and around Reynolda.”

Today, there is no lake to be seen at Reynolda Village. Instead, a grassy wetland landscape dominates the land.

“Lake Katherine was man-made; we know now that silt and sediment buildup is common in man-made lakes,” Archer said. “Really, Lake Katherine has been transforming into a wetland since its completion and has continued for 50 years.”

This rearrangement of landscape in Reynolda Village is the result of construction and development coupled with changes in the normal climate for the area.

Evidently, not all parts of nature are built to withstand dramatic ecological changes. One of its most sensitive aspects are Wake Forest’s trees.

Jim Mussetter has been Wake Forest’s arborist for the past 25 years, and he has witnessed signals of stress and struggle for survival among trees.

For Mussetter, the most saddening loss of trees and foliage on Wake Forest’s campus is the absence of sugar maples, a tree that is representative of the campus’s climate. Sugar maples failed to survive because the area’s soil became increasingly dry and shallow due to climate-related changes.

“When I came to Winston-Salem in 1992, both sides of Reynolda road had sugar maples, and in the fall, it was incredible,” Mussetter said. “But I can’t remember the last time I looked at them and said ‘that looks awesome.”

The world is struggling to keep up with the effects of climate change. The irreversible environmental consequences are almost impossible to tackle, but Wake Forest can act now to stop future degradation on and around its campus.

One of the most pressing issues Wake Forest must tackle is food production. With natural disasters becoming more frequent, local agriculture has suffered.

“When talking about resilience, the number one issue is local food production,” Campus Garden Manager Nathan Peifer said. “That means backyard gardens, neighborhood gardens and especially our own Campus Garden are most vulnerable to climate change.”

Campus Garden is responsible for distributing fresh, organic produce to service agencies that help alleviate hunger in the Winston-Salem community. When natural disasters such as hurricanes and extreme drought hit, the health of the community suffers along with Campus Garden’s production.

“In the fall of 2018, two major hurricanes swept through our region,” Peifer said. “We now tend to have heavier rains and longer dry periods between rains. It’s made water management more challenging, especially for those who are growing food on sloping land. We now need to be prepared for these unpredictable weather patterns.”

Changes in landscape, like the creation of urban environments with few pervious surfaces, can also affect vegetation. Wake Forest’s trees are a prime example of plants succumbing to human intervention.

“The increasingly urban setting of this campus makes a harsh environment for trees,” Mussetter said. “Living in confined spaces coupled with long hot and dry periods just aren’t good for them, and I see them suffer.”

Nonetheless, the future is bright for Wake Forest, thanks to its faculty’s dedication to reducing the university’s carbon footprint.

“Even since 2012, we have planted over 1000 trees,” Mussetter said. “It is awesome how we are committed to replenishing our ecosystem.”

Most interestingly, however, is the plan Wake Forest currently has in motion to jumpstart the university’s journey to offset its carbon footprint.

The Future: A Resilient Campus?

The Office of Sustainability is constantly looking for new and creative ideas to offset its carbon footprint. One of the most revolutionary ways they plan on doing so is through a Virtual Power Purchase Agreement.

“A VPPA is an agreement that allows us to financially support a large renewable energy project somewhere in the United States, such as a wind turbine or solar panel farm,” Batchelor said. “We will agree to buy energy from them for the next 15 years at a fixed price, they will sell the renewable energy to a local provider, and then Wake Forest will be able to keep the renewable energy credits (RECs).”

Batchelor and the rest of her team are eager to kick off the project.

“I am beyond excited about this project,” Batchelor said. “After a few years, it would offset 60 percent of our carbon footprint. That is basically all our purchased electricity. We are partnering with two other institutions, and we would be the first aggregation to do this.”

If the VPPA process goes smoothly, future Wake Forest students will never know a campus before renewable energy. Additionally, Wake Forest will save a multitude of money through this project to put towards ‘greening’ all parts of campus.

The road to sustainability is a long journey, and there is not one silver bullet that will fix everything. But every project Wake Forest has in place connects to a larger purpose: ensuring the future health of the world.