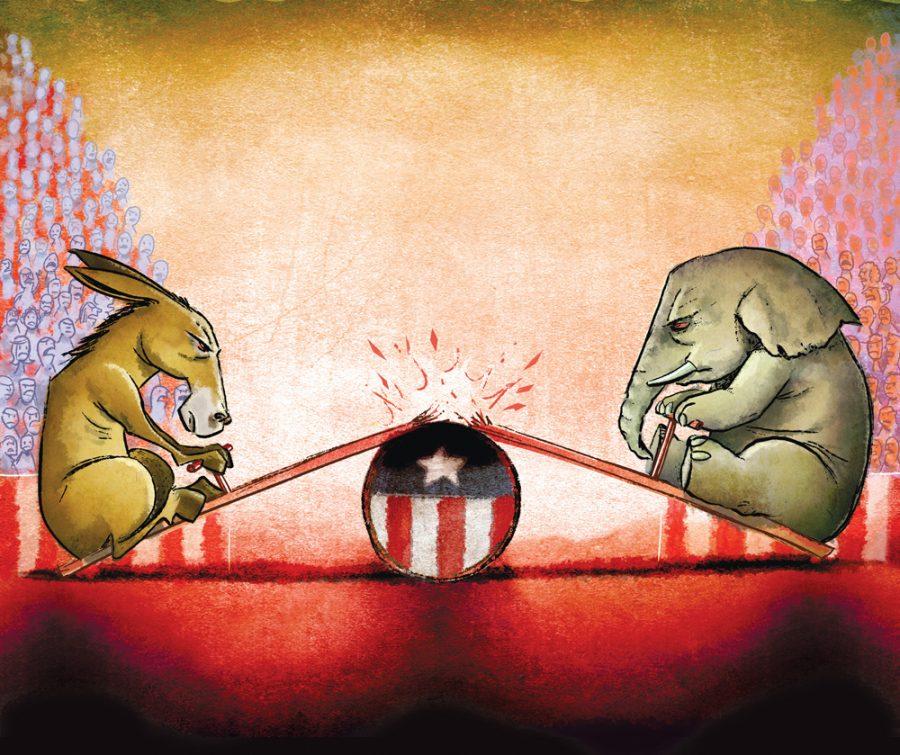 A panel of professors from diverse backgrounds sparked conversation surrounding ideology and its influence on individual’s political and scientific beliefs in a panel moderated by Melissa Harris-Perry on Feb. 16 in Wait Chapel.

“Ideology is a set of ideas about how we believe the world works, and how we believe we should organize ourselves in a society,” Payne said. “The problem in politics isn’t people thinking different ideology, it’s how they think about change and create walls between each other, making us politically polarized.”

As the campaign for the Democratic and Republican presidential candidates wages on, candidates have expressed many ideologies that clash among other opposing candidates — even within the same party — triggering some of the highest voter attendance in history at both the New Hampshire primary and Iowa caucus.

In Washington D.C., where decisions are often said to be “gridlocked” in Congress between the differing democratic and republican ideologies, questions have been raised about the effectiveness of the government in making decisions.

In answering the questions posed by Harris-Perry, all of the candidates used examples in history — both old and current — to explain their stances on certain topics pertaining to ideology.

Oreskes, who identified herself as a moderate, said she believes that differing ideology creates discussion, which is a key element to democracy.

However, she thinks ideology can be used incorrectly, drawing on the republican-led Senate’s recent announcement that they will not approve President Obama’s senate appointment until after the election.

“I think that we have a problem with ideology trumping the law,” she said. “The constitution does not say to appoint a justice except during an election year. So to say we don’t want to consider someone, no matter how qualified and experienced, is problematic.”

Purdy pointed to the division or “gridlock” that is created by the bipartisan tension in the government to be particularly problematic to him.

“Being a republican or a democrat says a lot more than it used to about your values and you beliefs about the world,” Purdy said. “There’s a failure of design, where we are divided out here in our groups of different beliefs and then there’s a difference between those groups and the actions that happen in Washington.”

Although Harris-Perry openly said she did not agree with the statement made by Purdy, Oreskes added to Purdy’s idea and related it to global warming.

“Gridlock can be very costly,” Oreskes said. “If we don’t get unstuck, stop our ways or don’t cut back on carbon dioxide emissions, then we will have some serious consequences and our children will pay the price.”

Oreskes said that the scientific data that has been collected shows that if global warming is not stopped, then the sea levels will rise one meter.

While Payne said he agreed that global warming was an issue that needed to be addressed, he said he differed from Oreskes in thinking that just presenting people with facts would persuade them.

“Trying to persuade people with ideological facts, even if it’s true and factual, doesn’t persuade people to act until it becomes personal and emotional to them,” Payne said. “I think we need to meet people where they are through emotions and storytelling rather than just statistics.”

Sparking a discussion, Oreskes counters his argument with the example of the “People’s Climate March” which took place in New York based on people acting on the statistics and numbers presented before them.

“I don’t think we can overgeneralize about what motivates people and their beliefs,” Oreskes said. “What we need to focus on is why are these issues an issue now? I think that is what we need to talk more about.”

This debate amongst the panelists about their different stances on different topics engaged sophomore Eugenia Huang.

“I thought the event was very representational of the topics we were discussing because all of the panelists weren’t afraid to disagree and pushback on each other’s ideas,” Huang said. “This is evidence of the kind of ideological differences people can have, but also how we can still have thoughtful conversation about tough topics.”

As a pre-medical student, sophomore Cameron Steitz said he found the discussion of different arguments to be helpful for him in understanding politics and the arguments of politicians.

“Listening to the discussion definitely gave me a new perspective in that I should listen to politicians I don’t agree with,” said sophomore Cameron Steitz. “Rather than just listening for what I disagree with from a politician, in the future I am now going to listen with more of an open mind to all their points in order to understand other arguments to help build my own arguments and beliefs.”