Recapping the first round of the NFL Playoffs 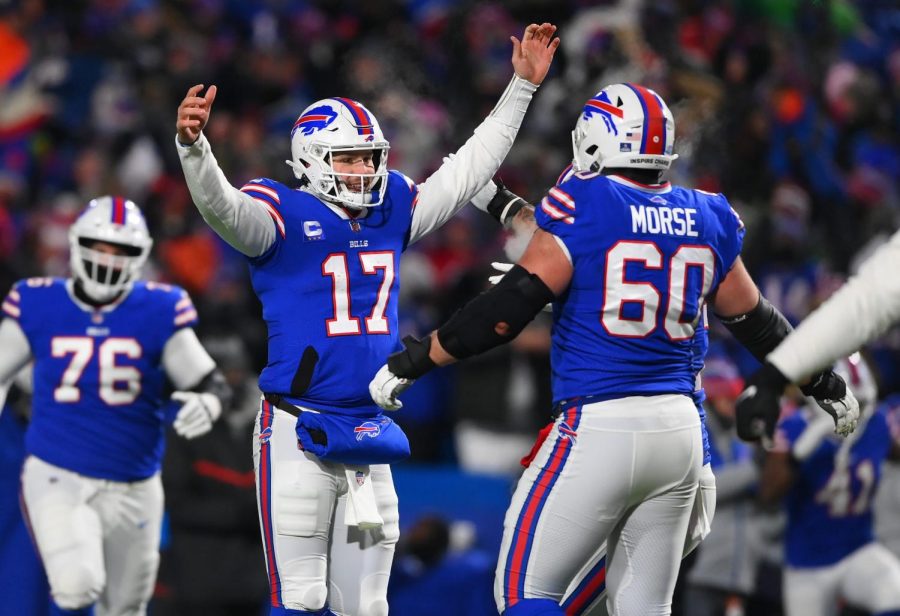 Josh Allen leads the Buffalo Bills to victory over the New England Patriots with five passing touchdowns. The Bills score on their first seven drives.

The Cincinnati Bengals were keen to change the course of history and end their 31-year playoff drought without a victory.

Paul Brown Stadium was electric throughout the course of the game, and the Bengals were able to control the momentum from the first whistle.

Bengals QB Joe Burrow made several impressive throws and showed his mobility in the pocket despite his ACL injury last season.

The game was not without controversy, however, as late in the first half “Joe Cool” rolled out of the pocket towards the sideline and fired a pass to the back of the endzone for the second touchdown of the game.

Officials initially believed Burrow was out of bounds and blew a whistle while the ball was in the air. Therefore, the play should have been ruled dead and Cincinnatti should not have been awarded the score.

Las Vegas’ Derek Carr, making his playoff debut, did his best to mount a comeback in the fourth quarter. The Raiders offense made one final drive with 1:51 left, but Carr threw an interception to Germaine Pratt on the Bengals’ nine-yard line, sealing the game.

Burrow and the Bengals are on to the next round, where they will face the No. 1 Tennessee Titans.

Many believed this AFC East matchup would be a close game, as both the Patriots and Bills split their regular-season series. However, the Buffalo Bills laid down the gauntlet on the Patriots and showed no mercy.

Josh Allen threw for five touchdowns and the Bills made history by becoming the first team to score on each of its seven consecutive possessions.

Belichick and the Evil Empire had no answer for the Bills explosive offense and defense. Patriots rookie quarterback Mac Jones struggled in the frigid temperatures; he threw two interceptions and looked listless for much of the game.

The Bills fanbase, also known as the Bills Mafia, came out in full force for this game and were the key to the team’s success.

The Bills look like a contender, but they will have their hands full when they face the defending AFC champion Kansas City Chiefs away from home.

The Buccaneers controlled this game from start to finish. Tampa Bay shut down the Eagles rushing attack, forcing Jalen Hurts into poor throws.

Tom Brady has continued to age like a fine wine. Despite missing key starters such as Chris Godwin, Antonio Brown and Leonard Fournette, Brady was able to find his stride with Mike Evans, who reeled in one touchdown and recorded 117 receiving yards.

The only thing standing against the Bucs at this point is depth. All-Pro right tackle Tristan Wirfs suffered a right ankle sprain, and center Ryan Jensen is also dealing with an injury following the game. Tampa Bay’s offensive line will be tested next week in the divisional round where they face the lethal defensive line of the Los Angeles Rams.

Cowboys fans will continue to tell themselves “this is our year”, only to go on and lose in the first round of the playoffs.

The Niners controlled the game from the beginning and built a commanding 23-7 lead to start the fourth. Yet they still kept the door open for the Cowboys, who began to mount a comeback and pull close in the fourth.

Dak Prescott had plenty of time on what would be their penultimate drive but overthrew his receiver to turn the ball over on downs.

The Cowboys’ luck did not run out, though, as Deebo Samuel came up inches short of the first for the Niners. This gave Prescott one more chance. With 14 seconds remaining, Prescott ran the ball up the middle and slid with around eight seconds on the clock. However, the ref had to set the spot for the ball and bumped into Prescott while doing so, which cost the quarterback crucial time. Prescott did not get the snap off in time and the game ended.

The Niners will face the No. 1 Packers at Lambeau Field in the divisional round.

Ben Roethlisberger may not have had high hopes for this game. In press conferences before the matchup, he jokingly said the Steelers did not stand a chance.

There was a slight glimmer of hope early on for Pittsburgh when TJ Watt had a scoop-and-score to bring the Steelers to an early 7-0 lead. After that, the Chiefs were in the driver’s seat.

Patrick Mahomes threw for 404 yards and five touchdowns in the blowout win. The Chiefs were slow to get rolling in this one, and it will be interesting to see if this issue has an impact on their divisional matchup against the red-hot Buffalo Bills.

Everything went right for the Rams and all went wrong for Arizona. The two titans of the NFC West clashed in the first-ever Monday night playoff game in NFL history.

On offense, Matthew Stafford and the Rams quickly jumped out to a 14-0 lead.

In the next series, Murray was pressured in his own end zone. In order to evade the defenders, he heaved the ball into the air only for it to be returned for a pick-six.

The game was seemingly over from there, as the Cardinals couldn’t flip the switch to mount a comeback. Stafford earned his first career playoff victory and will face the Buccaneers in Tampa.