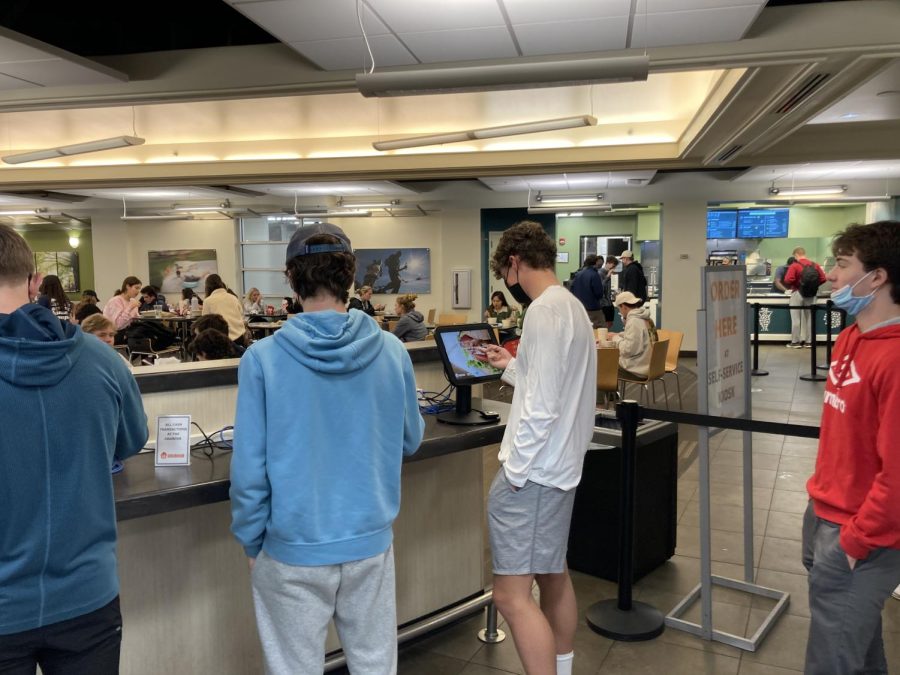 The Chick-fil-A lines in Benson remain long after the installation of kiosks.

Every year, Wake Forest waits until students leave for break to complete projects on campus that are considered improvements or repairs. These can be larger projects — such as the installation of newer sidewalks this past summer — or smaller projects such as the new Chick-Fil-A kiosks. In all honesty, though, the kiosks are neither an improvement nor a repair.

For reference, there are three kiosks on one of the marble counters near Chick-Fil-A, in the area formerly referred to as “the line.” The rope barriers no longer lead patrons to the front counter to place their orders but instead towards one of these kiosks, immediately eliminating interaction with the employees. Students then place their own orders — powered by GrubHub — and receive a number before waiting in the vast space in front of the counter.

The only time students truly interact with the employees is when they ask for their drinks, as GrubHub does not provide a drink selection option along with the rest of the meal.

This is a stark contrast from when students could simply tell an employee what drink they want with the meal. Additionally, the new space, coupled with the reorganized rope barriers, has furthered the traffic jam between Yamas and Chick-Fil-A — which was already an issue prior to the kiosk update. It’s difficult to see any of this as an improvement.

The only other possible explanation for the installation of the kiosks is that the university saw a repair that was needed to remedy the traffic problem in Benson. However, rather than resolving this issue, the kiosk line seems to be exacerbating it. Even when it is not peak Benson hours — everyone knows when that is — the line is still long enough to where you have to awkwardly break people up just to get through. This feat may be more difficult than Moses parting the Red Sea. The employees aren’t the issue, either. Chick-Fil-A already has a national reputation of employees that go above and beyond for customers, and the workers here at Wake Forest are no different (I may or may not get four sauces instead of the usual two without asking because they already know me).

This is not an argument against new technology either — using GrubHub or even Tapingo to order meals on campus can be much more efficient, especially at restaurants like Shorty’s. I can place an order at Shorty’s hours ahead of time and it might be ready when I get there.

This may seem like an overreaction or a personal problem that I’ll get over in a week, which is a fair argument. However, I’ve asked Chick-Fil-A employees how they feel about the new system and they have shared their own resentment. I’ve also overheard the general manager say that ordering will soon become mostly digital, which could potentially eliminate some jobs. From my understanding, many other students share my sentiments about the kiosk system, as well as the feeling that they’re missing out on forming personal connections with employees.

I’m in my final year at Wake Forest, and throughout my time here, I’ve witnessed several efforts to maintain a positive relationship between students and employees. We all know of our beloved Netta, who just retired last semester. Many of us know of Maria in the Magnolia Room, who always greets with enthusiasm. The installation of the kiosks in Chick-Fil-A to all but replace ordering at the counter threatens to replace the personal connections that students form with employees. Ultimately, the new Chick-Fil-A kiosks are inefficient and will degrade those relationships, which are a hallmark of the Wake Forest community.