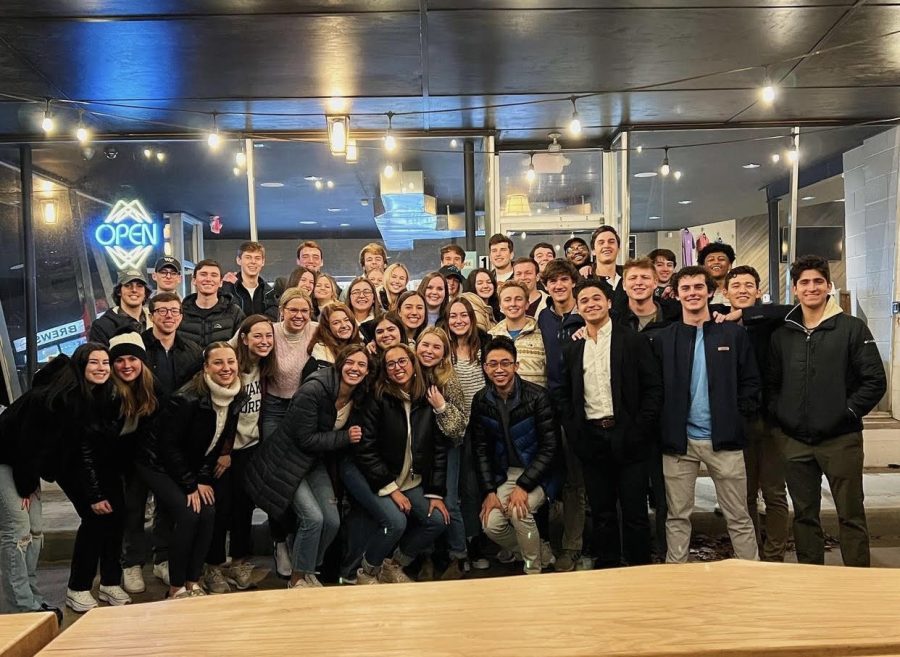 Alpha Kappa Psi — AKPsi — is the business fraternity at Wake Forest University. The organization defines itself as a “unique, prestigious association of students, professors, graduates and professionals with common interests and goals” that “provides the opportunity to cultivate business excellence, leadership development, employment readiness and lifelong brotherhood.”

On campus, AKPsi is commonly known as the first step into the business world and, more specifically, the illustrious undergraduate program at the Wake Forest School of Business.

Upon opening AKPsi’s website, one is confronted with the image of a sharp-looking suit and some purposeful history of the organization. In a way, this is quite similar to the general manner in which students at Wake Forest are first exposed to the fraternity. During rush season, many students will appear on campus wearing professional attire throughout the day. This is all part of the fraternity’s selection process and an effort to acquaint brothers with proper etiquette and professionalism that is standard in modern business.

AKPsi President Jack Sullivan was adamant about the positive opportunities that his fraternity provides to prospective members.

“Members receive benefits such as mentorship from older members, interview preparation and learning how to communicate with professionals,” Sullivan said. “I highly encourage anyone considering rushing to do so because AKPSi provides its brothers with so much more in addition to business skills.”

AKPsi is known on campus for its rigorous application process and its selectivity in choosing new members. The rushing process begins with an informational session, followed by “Meet the Major” and “Speed Dating” sessions. Applicants must also create short introduction videos in which they give an elevator pitch as to why they should be accepted into AKPsi.

The “Meet the Major” events  allow for applicants to have one-on-one conversations with brothers in their field of interest in order to gain perspective on how AKPsi can provide resources and experiences for people in different majors. AKPsi leadership is working to change the assumption that their fraternity is strictly for business majors.

The “Speed Dating” session is a more general period of connection-building with as many brothers as possible before initial rounds of cuts are made. The first three sessions are then followed by a social event, which applicants will attend if they have received an invitation. The social event is followed by a resumé review session and a final professional interview in which members from AKPsi evaluate the applicant’s professionalism, resumé and whether or not they would fit with the fraternity.

A separate application accompanies the rushing process. In this form, the applicant is asked about their interest in the organization as well as some unconventional questions like “why do you think only a small percentage of the population earns over $150K?”

The recruitment process for AKPsi is determined in large part by the rush chairs within the fraternity, who oversee the decision in the initial round of cuts. However, after the rushing period has ended, all AKPsi members participate in a final vote in order to induct new members.

Once students have joined the fraternity, they have access to AKPsi’s numerous benefits, which include professional networking opportunities, resumé and professional interview development as well as informal social events on campus.

Olivia Fondie, the marketing chair for AKPsi, has benefited significantly from the fraternity’s extensive network of connections. Fondie has acquired four professional internships as a junior — one of the opportunities was at Ethica, a sustainable fashion company started by a Wake Forest alumni. Fondie is not currently enrolled in the business school and is majoring in Communications with minors in Psychology and Film.

“Because we’re the business fraternity, everyone thinks that [AKPsi] is only for business school people,” Fondie said.  “We’re really one concentrated place for a diverse group of students with different majors,”

The values and benefits of AKPsi have changed many members’ lives at Wake Forest. The fraternity offers more than professional connections and important resumé and interview skills.

“Before joining AKPsi, I was feeling kind of lonely, like I didn’t have a place on campus. I was interested in marketing and wanted to join an organization with like-minded people. Joining AKPsi has really opened a new social door for me. I now have a place where I can meet people who are super motivated and passionate, who are also fun to be around,” Fondie said.

Although the road to AKPsi can be rigorous and the organization is perceived as extremely exclusive, many students have worked through rejection in order to join the fraternity. Olivia Fondie rushed AKPsi twice and eventually ascended to a prominent position within the organization.

“I think during my initial rush, I just didn’t meet enough brothers and do enough networking,” Fondie said. “It’s important to take time to meet as many people as possible during rush so that you can be well connected.”

AKPsi is starting its rush process with a casual informational meeting at Farrell Hall on Jan. 24 from 6-8 p.m. Interested students can apply at www.akpsi.wfu and can find more information on the fraternity’s Instagram “@akpsi_wfu.”