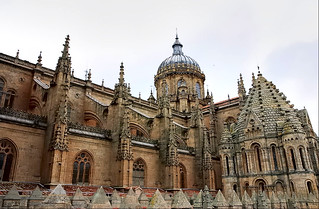 The cathedrals of Salamanca, Spain have a magnetic beauty. I toured them today with the Wake Forest University Salamanca program. Tucked away on the bank of the Tormes river, the imposing belltower and baroque dome of the Cathedral of Salamanca distinguish the skyline. The distinct locally-quarried sandstone gives all the buildings a golden, treasure-like hue.

As we entered the belltower to climb to the top, we were met with a chill. The windowless base of the tower was cold due to its thick stone walls and the January breeze. Our group’s footsteps echoed up the spiral staircase and across the narrow, barrel-vaulted passageway as we climbed higher.

We finally made it to the top, and I was enchanted by what lay in front of me. The rolling Spanish countryside — with mountains in the distance — framed the red-tiled roofs of Salamanca. While the view was spectacular, it was not what made my visit to the belltower unforgettable.

There were ten bells in large, open-aired windows encircling the top room. You could see the weathering of hundreds of years on their tarnished metal. Standing near them, the bells each seemed to have unique personalities. I can now understand why some bells are named in cathedrals around Europe — an instrument of their size commands respect and a name.

It amazed me that there were hundreds of words and phrases hand-scrawled on the stone between each bell. Many of the sections of Spanish script appeared to be drawn from the Bible, while others displayed the names of people. After asking our program director, Javier, as to the nature of these texts, he responded with the name of a family: Los Mariquelos.

Los Mariquelos were the keepers of the tower and lived as a family in the space in which we were standing, encircled by bells. It was their job to ring the bells on the hour and ensure that the clock had been wound. As soon as I learned that we were standing in the previous home of a family, the writing on the wall began to take on a new meaning.

Phrases that seemed stale at first took on a new dynamic. I imagined Los Mariquelos selflessly tending to their job. Their intense devotion must have been essential as they performed the thankless task.

A prominent inscription on the wall roughly translates to “blessed are those who hear the voice of Heaven and wakefully guard it close to their heart.” It is clear that Los Mariquelos heard that voice and chose to guard the bells surrounding their home. But what stood out to me was the way the quote places so much importance on what they were doing. Los Mariquelos viewed their work as a sacred vocation.

In modern American culture, it is hard to wrap our heads around the idea that someone could give their entire life to something as basic as ringing a bell. While the nature of modern work has certainly become more complicated, we are still all confronted with the problem of monotony.

I think that ringing a bell every hour would get old fast, but Los Mariquelos found a way to view their work in a positive way and alleviate a portion of the boredom. As this second semester starts, it is easy to view one’s work at school as monotonous, stale or grueling. However, by looking at the humble example of Los Mariquelos, we can be reminded of the importance of finding value in the simple and working to view our daily tasks in a positive way.