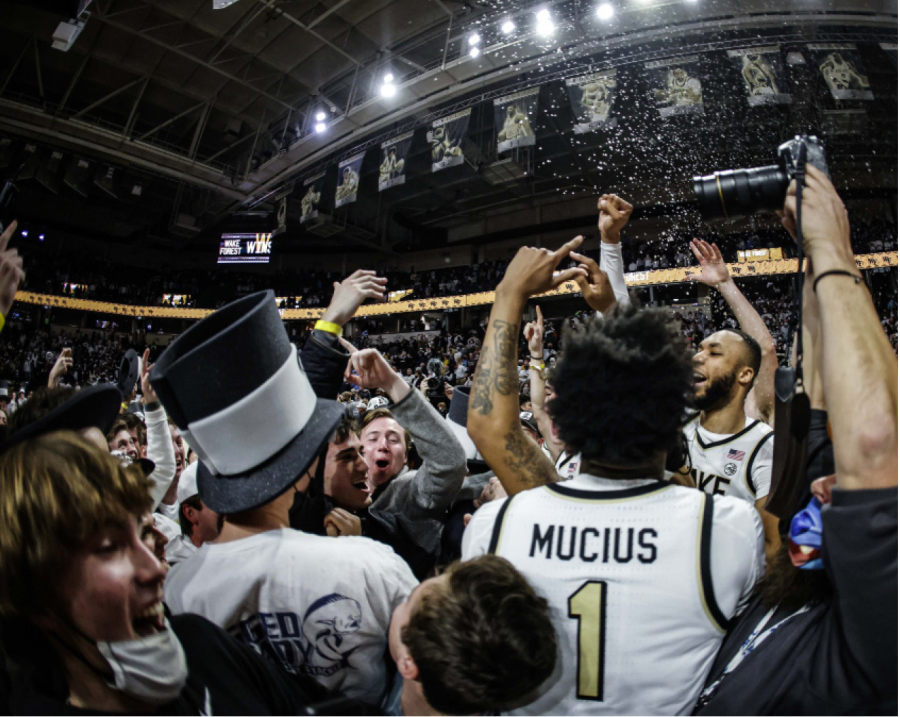 Players and students celebrate on the court of after men's basketball defeated UNC.

Wake Forest Men’s Basketball is back. Not that the Demon Deacons (16-4, 5-3) have not been proving that all season long, but Saturday night’s 98-76 home blowout of North Carolina forced college basketball fans on a national level to recognize that the team in Winston-Salem can play.

“Tonight was a signature win for this program,” said Wake Forest Head Coach Steve Forbes. “I am very proud of the guys.”

The victory led to a court storming and a thoroughly-rolled quad.

Several players shined for Wake Forest in the 22-point win over the in-state rival, including do-it-all forward Jake LaRavia.

The junior transfer scored a career-high 31 points in the win, chipping in 10 rebounds, four assists and three steals. LaRavia made his presence felt early with 18 points in the first half. Not a single Tar Heel could stop him from getting to his spots down low. He finished shooting 9-13 from the field and 12-15 from the charity stripe.

“The game plan was for me to play the way I play and attack hard,” LaRavia said. “My coaches have been telling me to be more aggressive.”

LaRavia secured ACC Player of the Week honors for his performance in this contest, in conjunction with the road tilt against Georgia Tech a few days prior.

Redshirt sophomore guard Damari Monsanto also starred in the game, displaying his shooting prowess on an electric 9-0 run. The ETSU transfer oozes confidence, and in just his second game back from his offseason Achilles surgery, he sparked the Joel into being as loud as it has been all season.

Monsanto knocked down a three-pointer on back-to-back-to-back possessions for the Deacons, stretching the lead to 19 points midway through the second half. Monsanto finished with 13 points and five rebounds. Wake Forest’s lead was stretched to 19 after his run, and never shrunk to less than 14 for the remainder of the game.

Senior guard Alondes “Man Man” Williams continued to play like the ACC Player of the Year candidate that he is, scoring 23 points on 9-15 shooting from the floor, including 3-5 from behind the three-point line. He filled up the stat sheet by grabbing six rebounds and dishing six assists.

Senior guard Daivien Williamson, on his 22nd birthday, scored an efficient 19 points on just nine shots and knocked down three of five attempts from long range.

“Williamson, Williams and LaRavia were the best players on the floor, and it wasn’t even close,” said North Carolina Head Coach Hubert Davis. “I mean, we didn’t have anybody that could guard LaRavia, he controlled the entire game. He punched us in the mouth at the beginning of the game. Alondes and Daivian could get into the paint at any time that they wanted to.”

Coming off an 85-57 loss at Miami, North Carolina was expected to bounce back on defense. But, Wake Forest was getting everything they wanted offensively, shooting 54% from the field and connecting on 24 of 32 free throws.

In 12 North Carolina wins, opponents have scored an average of 63.8 points a game. But in their six losses, opponents are averaging 90.2.

On the other end of the floor, Wake Forest was able to limit North Carolina’s best player, forward Armando Bacot, to just 12 points. Brady Manek, a former teammate of Williams at Oklahoma, led the Tar Heels in scoring with 22 points. Guard RJ Davis scored 18 points, but his backcourt mate Caleb Love couldn’t get anything going, shooting 3-15 from the field.

“I thought we did a really good job defending for 40 minutes,” Forbes said.

Court stormings are usually saved for highly ranked teams, but the Wake Forest student section made an exception for a blowout win over a blue-blood program and rival. It was quite the scene on the court; pure joy, dancing and even some backflips.

“Getting onto the court and being a part of that atmosphere was almost surreal,” sophomore Jack Szczepanski said.

“It reminded me a lot of when we beat NC State in football,” sophomore Sebastian Guerra said. “Having basically two of the biggest sports in college athletics become competitive at Wake [Forest] is great.”

Forbes, his staff and the players made their way to the quad post game to interact with students and get in on the toilet-paper -throwing fun.

It was a special night for Wake Forest men’s basketball, and year two under Forbes has proven to be a significant jump forward from year’s previous campaign. As said by ESPN’s Seth Greenberg, “Wake Forest is for real.”