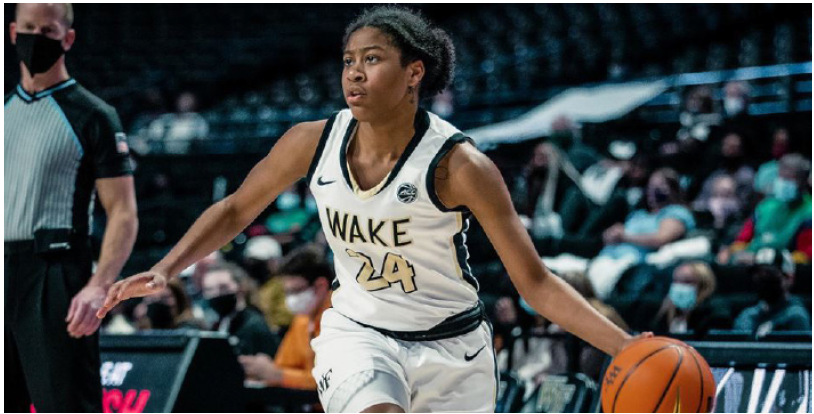 Sophomore guard Jewel Spear scans the court for passing options. She led the Demon Deacons in both losses with 16 and 22 points.

In an attempt to put their three-game losing streak to an end, the Wake Forest women’s basketball team lost two-straight ACC matchups against Clemson and No. 3 Louisville. The losses extend the team’s losing skid to five games and puts the Deacons in severe danger of not returning to the NCAA Tournament.

In their 44-66 defeat against the Tigers on Jan. 20, the Demon Deacons were once again led by sophomore guard Jewel Spear, who scored 16 points in the game. Despite the number of points, Spear had an off night in terms of shooting. She went 6-of-22 from the field and 2-of-11 from behind the three-point line. The victory over the Demon Deacons was Clemson’s first ACC win of the season.

Three days later against the Cardinals, Spear shot at a better clip, especially from behind the three-point line, going 5-for-11. The performance gave her a game-high 22 points.

In the first quarter against Clemson, the Wake Forest defense shined, forcing the Tigers to miss their first eight shots of the game. On the offensive side of the ball, freshman guard Elise Williams led the team with seven points, allowing the Deacons to go into the second quarter with a 13-6 lead.

In the second quarter, though, the wheels fell off the wagon for the Wake Forest offense. While they only allowed eight points on defense, the Demon Deacons shot 1-of-15 from the field, scoring two points in the entire quarter. Despite the poor shooting performance, a 27-15 rebounding advantage allowed Wake Forest to lead by one point at the half.

After a low-scoring first half, both teams began to open up the scoring totals in the third quarter. Spear led the Deacons with seven points, half of the team’s point total for the quarter. Clemson, though, pulled away during the frame, doubling Wake Forest’s 14 points with 28.

From there, already boasting a 13-point lead, Clemson pulled away even further, shooting 60% from the field. This prolific shooting in the fourth quarter allowed the Tigers to secure the 66-44 victory.

After the game, Wake Forest Head Coach Jen Hoover spoke on the need for consistency.

“I thought we had good energy at the beginning of the game and did a good job defensively in the first two quarters, but we did not finish the way we needed to in this one,” Hoover said. “We need to continue to work on being consistent for 40 minutes.”

Against Louisville, the Demon Deacons came out prepared to play in the first quarter in response to their previous loss. The team, led by Spear with eight points, shot 50% from the field and the three-point line, allowing them to lead the No. 3 Cardinals by one point after the quarter.

In the second quarter, Wake Forest continued their solid scoring, extending their lead to 25-21. But that’s when things went wrong for the Deacons. After leading by four, Louisville embarked on a 19-0 run for the remainder of the first half, giving them a 44-26 advantage.

To begin the third quarter, Louisville resumed their streak, scoring 13 more points without a Wake Forest response. The streak marked a 32-0 run for the Cardinals that spanned two quarters.

In response, down by 30, Wake Forest responded with a 9-2 mini-run, along with a 23-9 fourth quarter run. For the Demon Deacons, the deficit was far too large to overcome, giving Louisville the 72-60 win.

“I am proud of the focus and fight we started and finished the game with, but to come on the road and beat a deep, talented top-5 program, we have to sustain it for 40 minutes,” Hoover said after the game, once again emphasizing consistency. “We responded in the fourth quarter, getting stops and scores. We will continue to work hard and get better as we prepare for a tough, gritty Miami team on Thursday.”

The five-game losing streak now projects Wake Forest well outside of the NCAA Tournament and into the No. 11 spot in the ACC. The Demon Deacons will look to end the skid at home against Miami on Thursday.