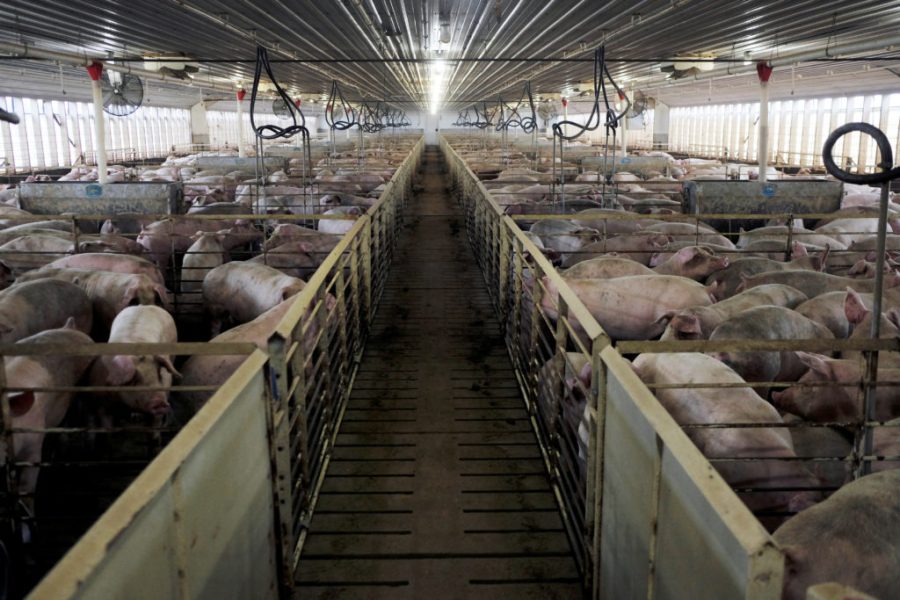 Farm animals live in terrible conditions and are subjected to cruel and inhumane treatment leading up to slaughter.

As it is understood today, “Pro Humanitate” focuses on the human experience: human cultivation and flourishing. This interpretation implies that the welfare of human beings ought to be prioritized over that of non-human animals. On the other hand, Humanitate, if taken to mean merely “kindness” or “humaneness,” stands in stark contrast to the ethical foundations of the former definition. How can we claim to be kind and humane while excluding non-human animals? The motto of the university is one that makes an arbitrary ethical distinction between the welfare of human beings and non-human animals. By definition, the word “humanity” restricts “collective cultivation” efforts to human animals — denying those privileges to non-human animals. At the root of our motto is a sharp distinction between the two species of animals — humans and non-humans.

Western tradition has long thought little of non-human animals and maintained an arbitrary hierarchy in which all humans reign supreme. The basis of this hierarchy is a belief in the “sanctity of human life.” The belief that all human life is precious has been left unchallenged for millennia. Such beliefs are enshrined in the Universal Declaration of Human Rights (e.g. “all human beings are born free and equal”), among other foundational documents. While this makes for a decent general principle of human ethics, it excludes the rights of non-human animals. The idea that human life deserves special consideration can also be seen in the following example:

Perhaps a person fancies a delicious plate of “infant liver” and places a reservation at a local steak house in hopes of obtaining this delicacy. If this person were to request that the chef prepare such a dish, there would be outrage and disgust at the mere idea that an infant should be mutilated just to satiate this person’s taste buds. They reconsider the options on the menu and decide to order a veal. With a sigh of relief, this person’s waitress kindly accepts the order — despite the fact an animal would need to be mutilated just to satiate their budding appetite.

Compare the outrage over infant liver to our treatment of cows, pigs and chickens — whom we consume by the millions daily without the slightest moral qualm. Why is it that abusing the weakest and most vulnerable in human society is considered “unforgivable” but the systemic abuse, torture and exploitation of billions of helpless non-human animals are actively encouraged? Humans are not unique in their desire to avoid pain and suffering — we should at least recognize this fundamental equality of interests. Many people would probably say that we have the right to do as we choose with animals — that humans are superior to them in every way. Humans do possess advanced cognitive abilities and other unique features, but it would be foolish to deny that many animals possess similar capabilities. Peter Singer’s “Speciesism and Moral Status” provides a good example of this. Research has clearly shown that most animals fear social isolation and can follow simple — or even complex — directions, are self-sufficient, have some capacity for speech and have a vested interest in their survival. Some animals, such as the gorilla Koko, have IQs well over 25 — animal psychologist Francine Patterson found that Koko may have an IQ as high as 75 or 90. How can we possibly conclude that all human animals possess superior abilities over all non-human animals, when many animals have been found to have IQs north of 70, well within human range?

This seems to have profound ethical consequences. The idea that inherent moral worth requires capacities for sophisticated rational thought or ethical agency would exclude many humans while including many animals. Reason as a basis of human uniqueness falls flat on its face when confronted with this evidence. I am not claiming that humans possess no unique qualities that separate them from other animals — all animals possess some uniqueness. I am suggesting that it would be foolish to condone animal exploitation on religious, normative or biological premises when the evidence suggests that animals are more deserving of freedoms than we once realized.

Animal liberation is an ethical framework that rejects the use of products made by or from animals where at all possible. It is worth noting that vegetarians refrain from using products from animals (e.g. meat) but will use products made by animals (e.g. eggs), while vegans reject this distinction — the dairy industry is just as cruel to animals as the meat industry, if not more so. Female cows are regularly impregnated using artificial insemination to produce milk and many are separated from their calf upon birth, causing immense psychological trauma. Most of these cows are killed prematurely and used for veal. Chickens experience a similar fate. The vast majority spend their lives in cages so small that they cannot stretch their wings. Even so-called “free-range” sheds can contain up to “nine birds per square meter — [equivalent to] 14 adults living in a one-room [apartment]”. Because they cannot lay eggs, over 45 million male chicks are killed each year. Even if vegetarians feel comfortable consuming products made by animals, propping up these industries is just as harmful to animal welfare as supporting the meat industry. One cannot denounce animal cruelty without rejecting the use of products made by and from animals.

Even in an ideal world where animals could be treated humanely while still meeting market demands, our justification for killing them remains the same — animals are commodities we can exploit or kill as we please. Moreover, killing an animal deprives it of future positive experiences, so slaughter can never be truly humane.

Imagine if we began breeding children only to kill them when we no longer had use for them. No amount of coddling in the manger could justify such exploitation.

The case for veganism goes beyond ethics. Per Worldbank, animal agriculture is responsible for “18% of all greenhouse gas emissions” — more than all transportation emissions combined. Similarly, around “75% of all agricultural land” is employed for the rearing of animals, leading to disastrous environmental consequences. If that wasn’t bad enough, “70% of the world’s freshwater consumption is attributed to livestock production”. The more land and water we use to maintain animal agriculture, the less land and resources are left for the millions around the world on the brink of starvation. Worst of all is that over 70 billion animals — almost ten times the size of the human population — are farmed for consumption every year. If humans were killed at such a rate, our species would be extinct in just eleven hours, per The Vegan Society. Put simply, if the world went vegan, we could save “eight million human lives by 2050, reduce greenhouse gas emissions from agriculture by two-thirds, improve healthcare-related savings and avoid climate damages of $1.5 trillion”, per The University of Oxford.

The call for animal liberation has increasingly gained international attention. We have a duty to shift our ethical standards away from the speciesist distinctions that continue to divide human and non-human animals. A moral revolution is required for those animals who cannot make the case for their own liberation. Carl Sagan once quipped that extraordinary claims require extraordinary evidence. Can we not say that extraordinary suffering also requires extraordinary justification? When reflecting on the cruel treatment of animals, we do not have ordinary justification for the ways that we treat them. The more defenseless and domitable the animal, the more we feel that we have a right to abuse them. Vegans, such as myself, are not responsible for presenting an affirmative case here. Those who consume and exploit animals must present evidence that what they are doing is justified. Veganism should be the de facto position — not the other way around. Animal liberation has never been more important.