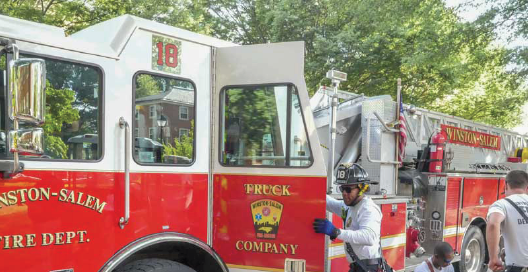 The Winston-Salem Fire Department played a crucial role in containing the fire.

On Jan. 12 at 2 a.m, many students — most still wearing their pajamas, shorts and slippers — congregated outside of Luter Hall, shivering in 32-degree weather.

Luter has had 11 fire alarms in the first two weeks of the semester. While this number may not be exact, the fire alarm rang so many times that I could barely keep track of it. The most disturbing incident was at 2 a.m. — a time when most students are in deep sleep.

On Jan. 18, Wake Alert sent out an email informing students that all classes would be held virtually due to the snowstorm’s freezing weather. The fire alarm rang four times in that single day — perhaps in protest of this development.

Besides the fact that it was still frigid outside, most students were in the middle of their classes during the Jan.18 alarm. My roommate told me that half of the students in her class disappeared from the screen during a group discussion. I was forced to turn off my camera to avoid the whole class seeing the chaotic crowd seen in my Zoom background.

Strangely, students were never told who this mysterious arsonist was, despite the fact that the fire alarm rang eleven times — even the RAs were confused. One of them told me that she didn’t know many details about the recent fire alarms in Luter, while another said that the Office of Residence Life and Housing (RLH) would not tell them who caused the fire alarm, but they were given the reasons.

So, what is the reason? On Jan. 19, after the fire alarm rang roughly eight times, RLH finally sent an email explaining that “the alarms [were] functioning properly.” While I don’t have much knowledge about the behind-the-scenes of these three-times-a-day “fire emergencies,” that statement is not convincing in the slightest.

Meanwhile, RLH has also acknowledged that the “sensors can’t distinguish smoke from steam, hair spray, etc.” Furthermore, the email clarified that “community directors meet with residents individually who may unknowingly be the cause of repeat alarms.”

I appreciate RLH’s detailed follow-up about the fire alarm issue. However, if anyone was warned because they used hair spray casually in their dorm, this is quite an unusual lesson to learn from setting off the fire alarm. It is true that the fire alarm — like any other implement we use to guard against potential danger — should be set at minimum sensitivity, but detecting the tiniest signal of hazard is different from detecting the wrong thing. Fires cannot become a “boy-who-cried-wolf” issue.

Furthermore, the large crowd caused by the fire alarm was certainly not conducive for mitigating the spread of COVID-19, which has been escalating because of the Omicron variant. The university’s COVID-19 policy includes concerns about social distancing and gathering. Situations where students are driven away from their dorms at 2 a.m. with their pajamas on provide few options for social distancing.

Fire alarms should not become a mystery or a joke. Students do not receive a credible explanation for each fire alarm. Instead, they chase the shadow of the truth, arriving at conclusions such as “it must be the Bostwick people because Johnson’s fire alarm didn’t ring a single time last semester.” The fire alarm is a serious matter — it would be better for everyone if students received an explanation each time the fire alarm rang. If the fire alarm is actually doing its job, we have the right to know who is responsible for violating university safety codes.

My intention is not to criticize RLH. I understand that a newly-renovated dorm would have more sensitive alarms and that Luter is not the only residence hall subject to this fire emergency routine. However, RLH should be more informative and timely the next time the fire alarm goes off.

From the Jan. 20 update from RLH to this writing, the fire alarm hasn’t rung again — I am keeping my fingers crossed and hoping that the alarm can leave us in peace for the rest of the semester.