A blind date with Dating Deacons 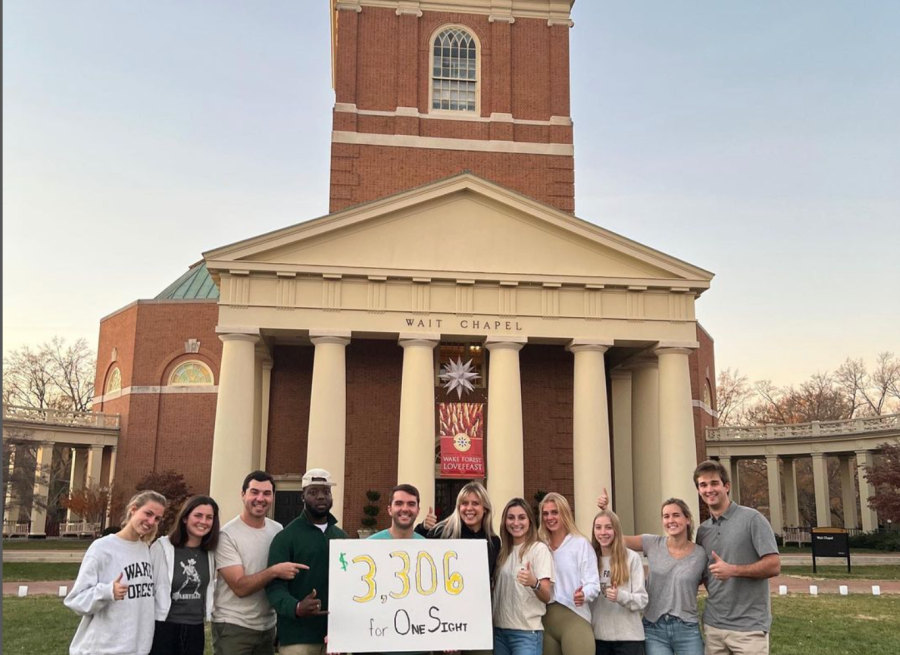 In 2019, senior Ted Middleton attended a dinner with then-Wake Forest president Nathan Hatch and his wife, Julia Hatch. After switching around the table’s place cards to sit next to the Hatches, Middleton was able to pitch them his idea for a new organization — Dating Deacons, which now offers students “blind dating that supports the blind.”

“I pitched them the idea for it and Julia Hatch was obsessed with it. Hearing that the president’s wife supported it made it go from a funny idea to ‘Oh wait, this is something I’m actually gonna do.’” Middleton said.

As the idea for the on-campus dating service began to take form, Middleton recruited a team of “matchmakers’’ to help pair students together in a way that would foster genuine connections on dates. Dating Deacons chose to partner with OneSight — a non-profit organization that provides vision care around the world — to fulfill the ‘supporting the blind’ slogan.

With the help of its social media team, Dating Deacons has rapidly grown in size over the past two years. Their Instagram page,

@datingdeacons, regularly posts humorous promotional videos; a few are modeled after Superbowl commercials, while others are memes One even reads, ‘last chance not to be lonely!’. Last fall, 16% of Wake Forest students participated in at least one Dating Deacons event.

“We’ve been trying to grow our social media so that our brand is something that people want to follow for content, not just because it’s a dating service,” Middleton said.

Since its launch at Wake Forest, Dating Deacons has expanded to a total of nine college campuses under different names that reflect the school’s brand. For example, the name of the same program at the University of North Carolina is ‘Carolina Cupid.’ Generally, Dating Deacons picks schools that have features similar to Wake Forest, like a tight-knit community with many different social groups.

To participate in Dating Deacons, participants fill out an online questionnaire about their personality, interests and preferences. However, the survey questions are unlike those seen on popular dating sites; one of them reads ‘Do you pee in the shower?’ and is immediately succeeded by a follow-up question, ‘Did you lie on the last question?’.

Based on the responses recorded on the application, an algorithm matches up students who likely would get along well with each other. Different questions are weighted differently within the algorithm to ensure the best quality matches are made.

Virginia Wooten, co-president of Dating Deacons, notes that although the algorithm is a sophisticated way to connect the couples, human ‘matchmakers’ always have the final say in who is paired with whom.

“Last year, during finals season, I went on a Dating Deacons double date with two people I had never met before,” co-president Lawson Morris said. “Turns out we had a ton of mutual friends and we stayed at the restaurant for such a long time getting to know each other. It was so fun.”

Though the word ‘dating’ is in the namesake of the organization, Wooten and Morris explain that part of what makes their club unique is that they have redefined the concept of dating to remove the requirement of romantic attraction.

“When people think of dating, there may be a lot of pressure to make it a romantic thing, but we have made it more of a social experience,” Wooten said.

Recently, Dating Deacons has transitioned to offering only double dates through their program. Students can sign up with a friend to meet another pair of people on a date either on or off-campus. Middleton explained that this was motivated both by a desire to increase participant satisfaction and to ensure that the environment remains as safe as possible. The ‘exit survey’ from the program revealed that the average rating of an individual date last year was 7.3, while the mean rating of a double date was 9.1. Also, participants felt that having a familiar face nearby may make a blind date feel less risky and more enjoyable.

Although Dating Deacons has remained fully operational throughout the pandemic, current university policies may allow for more in-person group events — perhaps speed-dating along with the ongoing on-campus sign-up and informational tabling.

“Dating Deacons is going to long outlast me at Wake Forest, and I’m so excited to see the future of it,” Middleton said.

Correction Jan. 28 at 11:20 a.m.; A previous version of this story referred to Dating Deacons President Ted Middleton as “Tom”.