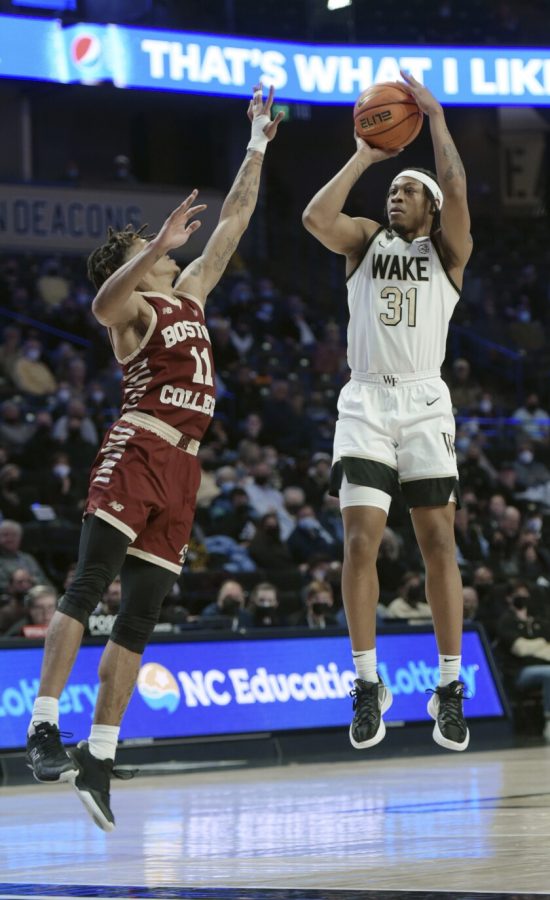 Courtesy of the San Diego Tribune

Wake Forest earned its third straight 15-plus-point ACC victory Monday with a 87-57 home blowout over Boston College (8-10, 3-5). The last time a streak like that happened, Chris Paul was wearing the Old Gold and Black.

The 30-point margin of victory is also Wake Forest’s largest win in conference play since 2017.

“Defensively, we were really good again tonight for 40 minutes,” Wake Forest head coach Steve Forbes said. “And when we got the rebound, we really got out in transition.”

Jake LaRavia followed up his 31-point,10-rebound explosion against UNC with another double-double and a career high six blocked shots. LaRavia scored 11 points and grabbed 10 boards.

“They may have the ACC player of the year in Alondes Williams,” Boston College Head Coach Earl Grant said.

“Man Man” has been the total package this season. He puts up numbers, elevates the play of his teammates, all while doing it with style. And he has loved playing for this team.

At the first media timeout, the score was tied at five apiece. The Demon Deacons were fortunate to not be trailing after a very sloppy start.

“We didn’t get off to a great start,” Forbes said. “But we settled in, and started to grind away.”

“Early in the game, we missed a lot of shots at the rim,” Grant said. “Against a team like this, we have to capitalize on every opportunity because they have proven that they can score. Every night it seems like [Wake Forest] has 80 points.”

The Deacons are now second in the NCAA — behind No.2 ranked Gonzaga — in field goal percentage on two-point attempts. The excellence is occurring on both ends of the floor, as noted by Forbes. After holding North Carolina to 33% shooting, Boston College shot just 25.4% (18-71 FGs), which is the eighth-lowest opponent field-goal percentage in program history.

One thing Forbes was not happy with was the defensive rebounding in this game, which is appearing to be the main weakness of this team. After giving up 23 offensive rebounds to UNC, Boston College grabbed 18.

This game was originally scheduled for Dec. 22, but a COVID-19 outbreak within Boston College’s program forced it to be rescheduled.

Next up for Wake Forest is a rematch with Syracuse on Saturday night at 8 p.m. in the Carrier Dome. When these teams met in early January in Winston, the Demon Deacons escaped with an overtime win.

“It’s always a little bit more of a chess match the second time around,” Forbes said. “I’m sure they are going to adjust to the way we attacked the zone, so we are going to have to put some new wrinkles in.”