Review of Craft Beers in Winston-Salem 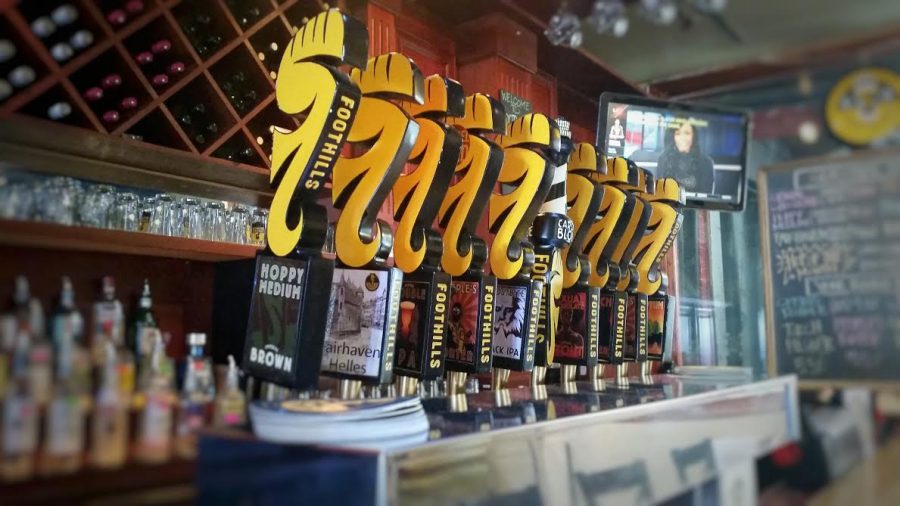 Micro-breweries in Winston-Salem offer a diverse selection of creative beverages.

Foothills Brewpub on Fourth Street features locally-made craft beers. It’s open daily from 11:00 a.m. to 2:00 a.m., making it the perfect place to start or finish an evening out.

For a look inside the brewery, grab a seat in the back room or at the bar. There are large windows showcasing the large silver beer tanks that line the walls — if you’re lucky you spot someone tending to the brew.

The current brews are written on a chalkboard at the end of the bar. Currently, the list consists of six seasonal brews along with six year-round favorites.  The bartender happily gives out samples to help you find a beer or you can take a flight for $7.99 and sample six different brews.

The Carolina Blonde Cream Ale is always a great go-to if you are just getting into the world of craft beer. With an international bitterness unit (IBU) of 15 and an alcohol by volume (ABV) of 4.3 percent, it is a mild, light-summery beer that is available all year for a steal of $3 per pint.

But if you go in February, the beer to drink is the Sexual Chocolate Imperial Stout. This beer is brewed once a year and sells out fast. The dense, dark chocolate stout is served in a 12-ounce glass because the ABV is a whopping 9.75 percent. The chocolate is complimented with notes of espresso and molasses and a high IBU of 85 to round out the richness without making it too bitter.

This beer has a loyal following; people line up at the Fourth Street Brewpub at 2:00 a.m. and wait until the pub opens at 8:00 a.m. to secure their share of 22-ounce bottles of Sexual Chocolate — so get it while you can.

From Foothills you can walk down the block to Corks, Caps and Taps, a specialty beer and wine store that offers 35 constantly changing tap beers to enjoy while relaxing in the cozy bar.

If you are looking for a new beer to try, this is the perfect place to start. For $2.50 you can try a pint of Draft Line’s One Hot Blonde. It’s a North Carolina spicy, blonde ale that is brewed with chipotle and ghost peppers, giving it a surprisingly spicy after taste.

Another good option is the crisp Blowing Rock Midnight Raspberry Wheat. It’s a brown beer with muted fruity undernotes that finish with a hint of sweetness.

Or, you can try a sour beer like the Wicked Weed Tropic Most Gose. It’s a tangy passion fruit beer that is easy to drink.

If you are overwhelmed by all the choices, stop in on a Thursday for a free beer sampling with the owner or you can get a beer flight a for $10 and sample five different brews.

Small Batch is a true craft brewery. They offer 12 different beers that are all brewed one barrel at a time right next door to the bar serving them. The beer goes quickly, so they keep a running tally of the current supply on their website.

Their top seller is the Mr. Lemon Man IPA. It’s a bright citrus beer with a soft sweetness that is evened out with a mild bitterness coming from the IBU of 58.

The other top seller is the Percolator Mocha Stout, a strong coffee flavor with just enough hops (IBU 33) to even out the dark flavor.

The warm bar is the perfect hangout spot, which, with a long bar and string of tables lining the wall, allows there to be plenty of room. However, it fills up fast, so a large beer garden in the front accomodates big groups.

If you are a sports fan, Small Batch is a great alternative to your normal sports bar. On the three TVs you can always catch a soccer game — they even have a beer named after the bar’s favorite Premier League team, the Arsenal Brown Ale.

Stop by for Pint Night Thursdays and buy two drafts. You will even get to take home a special pint glass featuring that month’s original artwork.

Hoots Roller Bar and Beer Co. is located in the West End Mill Works right next to the Porch Kitchen and Cantina, making it the perfect spot to grab a drink while waiting for your table. The low lighting and old brick walls create a warm vintage feel that hosts three pinball machines and a jukebox.

Hoots offers just six beers but makes up for the small selection with a craft cocktail and soda bar.

One of the bestselling beers is the Gashopper IPA, with an IBU of 58 and a fruity smoothness that is easy to drink.

Another bestseller is the ESB or Extra Special Bitter. This English-style beer is slightly bitter with an IBU of 32, but it remains smooth.

Check back for the Zinzenbock Winter Seasonal ale, it is currently in the tank getting ready for the tap.

If you don’t want to make the trek downtown, Lowes Food’s Beer Den offers eight beers on tap and sells reusable growlers that are filled to take home.

Lowes has a wide selection coming from North Carolina breweries like Duck Rabbit and Foothills. They also feature beer companies from Maryland and Colorado.

If you are looking to indulge, try DuClaw Brewing’s Dirty Little Freak. It is a decadent caramel, coconut and chocolate creation — so basically, if the Girl Scouts made a beer, this would be it.

A crisper beer to try is Great Divide’s Orabelle. It’s a golden citrus Abbey Tripel that packs a punch with subtle spices and an ABV of 8.3 percent.

Don’t want a growler? Create your own six pack from Lowes’ selection of bottles and cans from over 70 craft breweries.