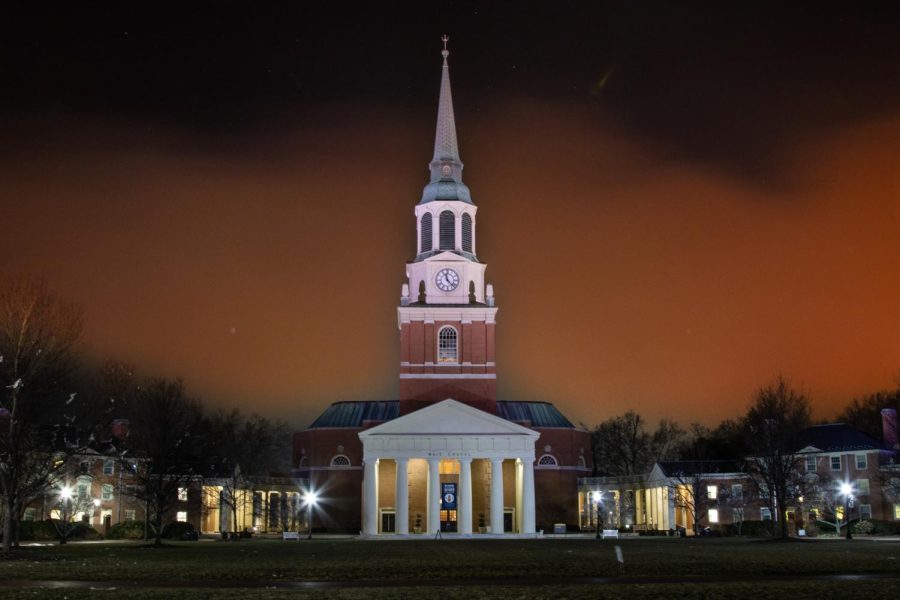 Smoke from the fire forms in a haze over Wait Chapel.

At 1:04 p.m. on Wednesday, minutes after Winston-Salem Fire Chief William “Trey” Mayo announced that residents within the one-mile radius of the Weaver Fertilizer Plant fire should not return to their homes tonight, Wake Forest University announced that classes would resume in person on Thursday.

“There is enough ammonium nitrate on hand for this to be one of the worst explosions in U.S. history,” Mayo said in a Wednesday afternoon press conference, echoing his comments early Tuesday.

The voluntary evacuation order for the one-mile radius remains in effect. Some students’ classes are in the radius, such as Anthropology 111. The university reported that about 1,000 students, faculty and staff reside within the one-mile radius.

Many students, faculty and staff have evacuated, taking shelter in nearby hotels and in neighboring cities. In addition, a  large number of students are displaced from Wake Forest and are now being called back to continue in-person classes.

On-campus workers are continuing their shifts in an environment that contains respiratory irritants. While the air quality may be safe, Wake Forest should not expect its students to continue classes in person in conditions such as these, especially considering the readily-available option of an online modality for classes. For students that have no impediments to healthy breathing, this is bad enough, but for students with COPD and asthma, Wake Forest’s decision to send students to class is especially unconscionable.

Students are outraged, and rightly so. Last night, in a meeting with Student Government, Vice President for Campus Life Dr. Shea Kidd-Brown noted that the last few days have been incredibly stressful for everyone in this community. We understand that no one has had all the information at any one time during this situation, but the stress and confusion of the past few days have deteriorated student morale. To expect students to learn in the shadow of a ticking time bomb – whether a fertilizer fire or mounting anxiety because of said fire — is irresponsible.

The outrage is now organized. Six minutes after the Wake Alert was sent out, students started and shared an online petition calling for the administration to cancel in-person classes. As of publication, that online petition has garnered 3,900 signatures. Wake Forest’s student government is currently addressing the many concerns of the student body and relaying them to the administration.

This decision is part of an irresponsible and dangerous pattern of ignorance towards the mental and physical health and well-being of the student body. The students, faculty and staff of the Wake Forest community deserve an administration that prioritizes the wellbeing of its campus.