WFU theatre returns with “John Proctor is the Villian” 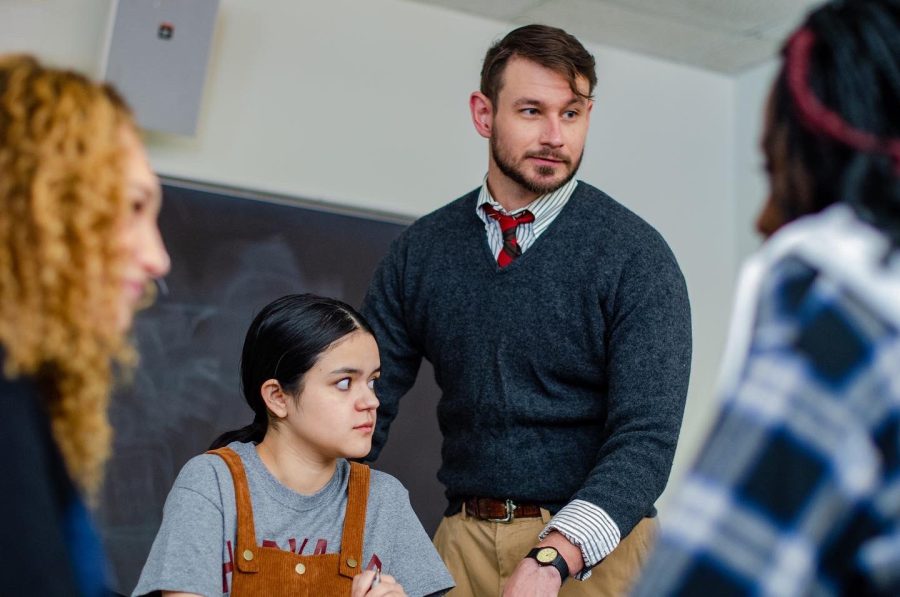 Cast members rehearse for the upcoming production of "John Proctor is the Villain".

After a hiatus during winter break, Wake Forest University Theatre will return to Tedford Stage to perform its third play of the season, “John Proctor is the Villain”.

Written by Kimberly Belflower and directed by Dr. Sharon Andrews, professor for acting and directing in Theatre, the play is set in modern Appalachian Georgia, where a high school class is studying “The Crucible”. Meanwhile, rumors begin to spread about one student’s father.

The play centers around a group of teenage girls investigating the truth behind a patriarchal power structure. The witch hunts of the 17th Century are questioned and redefined, and issues like sex education, “girl help girl” and the #MeToo movement are explored.

“The essence of this play is about a group of young women coming to consciousness about what is problematic,” Andrews said. “It is showing these young people who are trying to break out of the cliched, stereotypical image of who they should be. It is a very contemporary play, and that is the reason we wanted to do this play now.”

The relatability of this production is also crucial for Elinor Grage, a senior at Wake Forest who played one of the main characters in the play.

By sympathizing with the characters, Grage and other cast members learned how to better support victims of sexual assault and harassment.

“‘John Proctor is the Villain’ is a play for now,” Grage said. “Taking place in a high school in 2019, it reminds us of the urgency of the #MeToo movement, which was somewhat buried by the COVID-19 pandemic.”

Stage manager Chris Cates thought the main theme of “John Proctor is the Villain” spoke to him strongly, and by presenting this play, he hopes to form a supportive atmosphere that encourages victims to speak up.

“The #MeToo movement has been going on for years now — with Tarana Burke having started it in 2006 — and it has been something that has even permeated throughout high school English and history classroom discussions,” Cates said. “I think it is always time to grapple with the power structures that inform our daily lives and our opinions on whom to believe when someone tells their truth.”

The play’s treatment of “The Crucible”, which the department performed in 2018, stands out to Sharon and those involved in the production.

“‘John Proctor is the Villain’ is such a mind-blowing play for me because it really made me start thinking about ‘The Crucible’ from a whole new angle,” Freya Zheng, one of the assistant stage managers, said. “It’s not hard to find out that many topics and arguments in this play can also be seen in works that are written and produced in other countries.”

However, it is not easy to perform theatre while the world is still haunted by COVID-19, especially with the new Omicron variant. The recent snowy weather also added new challenges for the production team.

“With no institutional infrastructure or support in getting our cast members tested, we have had a really difficult time trying to establish routines and safety nets to ensure the health and care of our cast and production team,” Cates said.

However, he still urged that seeing the play is worthwhile to every student.

“We have guidelines that are meant to best ensure the safety and security of our audiences, just like athletic events,” Cates said. “I hope to see many of your beautiful masked faces out there in the audience at ‘John Proctor is the Villain’.”