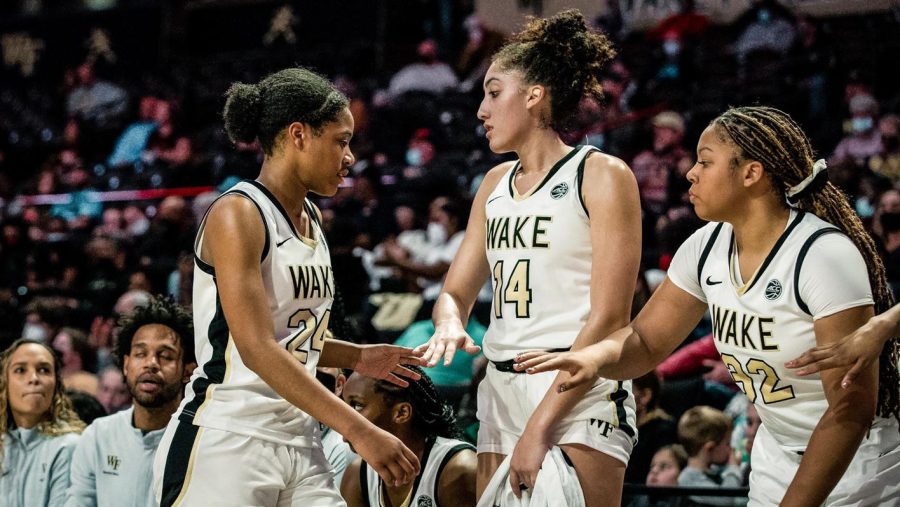 The women's team continues to slide in the ACC standings.

After a near comeback fell flat against No. 3 Louisville on Jan. 23, the Wake Forest women’s basketball team faced Miami four days later with hopes of ending a five-game losing skid. They lost.
After the game, Wake Forest head coach Jen Hoover put a positive spin on the demoralizing loss.
“I am really proud of the way we took care of the ball tonight, but we have to do a better job on the glass, especially down the stretch,” Hoover said.
The Demon Deacons were led by a career-high performance by junior forward Olivia Summiel, who knocked down 14 points on 60% shooting from the field. Summiel also added six rebounds on the night.
Also scoring 14 points was sophomore guard Jewel Spear, with 12 of those points coming from behind the three-point line.
Wake Forest was led on the boards by another sophomore, Demeara Hinds, who grabbed 10 rebounds and scored seven points.
“Demeara Hinds had a great game especially getting offensive rebounds and second-chance looks for us,” Hoover said. “I love this team’s determination to get back to playing a full 40 minutes of tough Wake Forest basketball.”
In the first quarter, the Demon Deacons were buoyed by their three-point shooting (3-6), which made up a mediocre performance from the field (7-16). Despite problems shooting the ball, an impressive six points off turnovers allowed Wake Forest to enter the second quarter trailing by just one point.
For the first five minutes of the second quarter, both teams traded baskets, keeping the scoreline close for half of the quarter. During this stretch, both teams shot poorly, leading them both to finish under 40% shooting on the quarter. After trading baskets for five minutes, Miami finally found the gas, going on a 7-0 run to head into the half with a three-point lead.
Wake Forest began the second half with a game-tying three-pointer from junior guard Alexandria Scruggs. Spear gave the Deacons the lead after with a three-pointer of her own, but the Hurricanes evened the score right back. In the latter part of the quarter, Miami once again mounted a 7-0 run, but clutch shooting by Summiel brought the score back to even. After two free throws by Spear and a defensive stop, Wake Forest was able to enter the final quarter with a 46-44 lead.
To begin the final quarter, both teams fought for positioning, and Wake Forest extended its lead to four. But, the Hurricanes fought back to tie the game. After a score from Spear, the Hurricanes unleashed three straight buckets, allowing them to regain the lead. In the final minute, Miami extended the lead to five and then closed the game out from the free-throw line, giving them the 66-59 victory. The final quarter fell apart much because of Wake Forest’s shooting from the field (26%).
With the loss, the Deacons now stand at 12-9 overall and 2-8 in the ACC, which is good for No. 12 in the conference. Wake Forest will look to get back on track on Thursday against North Carolina in the Joel Coliseum.