Panelists, including some administrators, addressed student concerns such as Spring Break and air quality on a Friday afternoon webinar 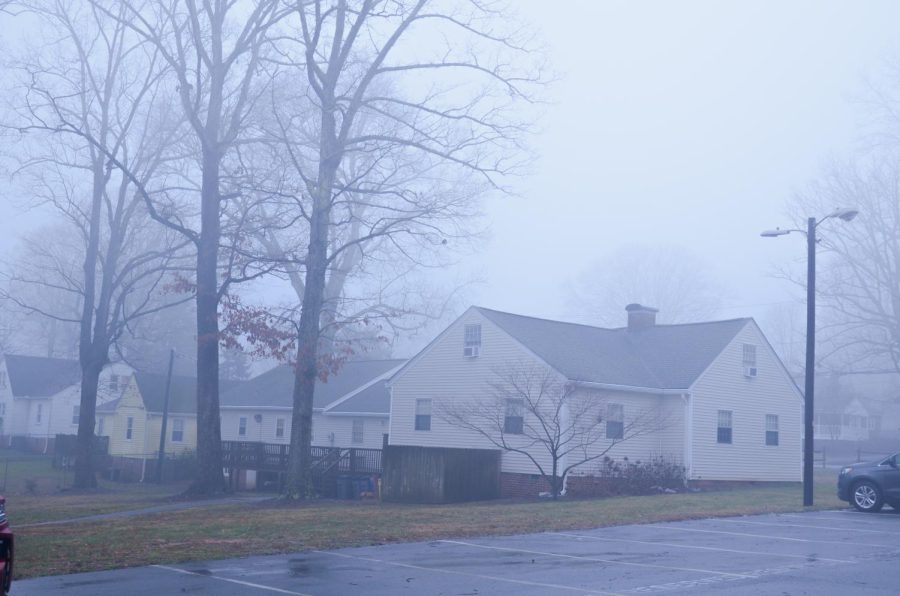 Smoke covers the Road Houses on Thursday afternoon as a rainstorm swept through the area.

Wente commenced the webinar by thanking the community that helped respond to the fire including the city, state, federal emergency responders and the university’s incident management team.

She continued to detail the efforts of the Weaver Plant Fire emergency operations center, which included a representative from the university who received hourly information regarding the state of the fire.

“My goal for our time together is to make sure you have all the available facts, as we know them now . . . several people who join us today will speak on the criteria and how we coordinate our response,” Wente said before introducing the webinar panel.

Kersh answered several outstanding questions, including the decision to cancel classes rather than resume them in an online format.

“We had reports that dozens of students who had to evacuate hastily Monday evening did so without their laptops or course materials,” Kersh said. “Also, at least some of our displaced students did not have reliable access to quiet places for logging on and joining classes.”

He also reassured attendees that the spring semester calendar would be adjusted so that there is no reduction in Spring break. The canceled classes will likely be made up during two reading days, Thursday, April 28 and Friday, April 29.

“[The Incident Command System] allows us to work together to coordinate our response — everything from operations to public information to planning and logistics . . .” Vernon said. “We have over 35 agencies involved from state, local and federal partners, including the Environmental Protection Agency (EPA) and The Bureau of Alcohol, Tobacco, Firearms and Explosives.”

Chauncey Bowers, emergency service manager for the WFUPD, detailed their involvement during the turmoil, which started with the evacuation order.

“So, first of all, right out of the gate, applying the evacuation order that was instituted by the Winston-Salem Fire Department to Wake Forest involved members of the police department . . .” Bowers said. “ We’ve worked with the Provost office, the academic deans and human resources as adjustments were made to academic schedules . . . we also supported major events with our athletics department and our chaplain’s office that has been coordinating emergency financial assistance from those directly impacted by the emergency.”

Bowers then handed the conversation over to another WFUPD Chief, Regina Lawson, who noted the convenience of the adjoining university fire department and nearby Winston-Salem police department, particularly in a time of emergency.

“Not just in an emergency situation, we meet regularly and we talk often with the Winston-Salem Police Department,” Lawson said. “They understand campus culture, they understand student impacts and support the need for safe campus communities on a daily basis.”

She continued: “There’s still a lot of worry and concern, but I think we all have a lot to be very proud of and the professional interagency approach to this incident and the fact that it’s been contained and minimized without injury and loss of life. I’m very proud.”

Another member of the university police team, James Herring, added that decisions were made based on information received directly from the emergency operations center, which sometimes seemed to contradict the media’s information.

“While I appreciate that the media wants to try to keep the community informed, the information that they were reporting sometimes came from sources not associated with the incident response,” Herring said. “Our information, on the other hand, came directly from the experts on the scenel Everybody really came together and looked out for the whole community right there at the emergency operation center.”

Director of Wake Forest Environmental Health and Safety Stephen Fisenne affirmed that though data collected from air monitoring stations around the area and outside Alumni Hall, as well as the EPA’s data, there was no detection of noxious chemicals in the air, such as nitrogen dioxide and ammonia, associated with the ammonium nitrate fire.

“The good news is that as bad as this incident was, it’s improving and the risks of any long-term consequences for the campus in the surrounding area seem limited,” said Meiburg

“During the pandemic, the campus building ventilation systems here at Wake Forest were enhanced,” Shenette said. “These changes provided a higher level of building filtration and these enhancements were operating properly and provided acceptable indoor air quality for anybody that was in our building.”

He also explained the specific filters and installation of GPS plasma and ionization technology which “increased the ability to capture fine particles” and that the “covert enhancements have proven very effective during the wave of fire.”

Brown highlighted several groups that helped ease the anxieties of housing displacement and various other concerns including The Student Support Center, Residence Life and Housing and Parking and Transportation partners. She emphasized that the university call center will continue to operate until 9 p.m. tonight.

Wente concluded by giving gratitude to all responders and individuals involved during the ongoing incident, as well as the entire Wake Forest community.

Wente encouraged parents and students to reach out if they had any additional questions.