Wake Forest has shown a consistent disregard for its students, failing to live up to its motto 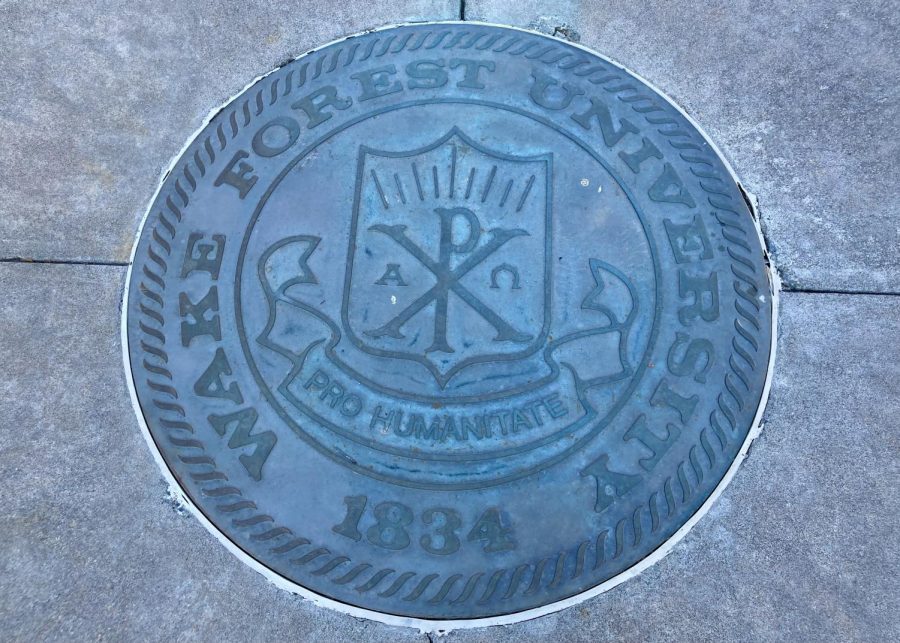 While Wake Forest's Pro Humanitate motto is proudly displayed on the campus seal in Tribble Courtyard, many believe the university has not been living up to this motto.

When I, Sophie Guymon, committed to Wake Forest University nearly two years ago, I had high hopes for what was to come. After all, how could a university with a motto that literally translates into “For Humanity” have anything less than my best interest in mind? This motto is supposed to shed light on the greater purpose of the university — it should mean caring for one another in all aspects, and be taken a step further than a banal platitude.

Three semesters later, it saddens me to say that Wake Forest has displayed a pattern of prioritizing profit over people, failing to live up to their Pro Humanitate motto. There has been a demonstrated disregard for the lives and well-being of the campus community. This has been especially throughout the ongoing COVID-19 pandemic.

In February 2021, Wake Forest faced its worst COVID-19 outbreak to this date, and to say they mishandled it would be an understatement. With 20% of the student body having tested positive within the first month of the year, we were let down by the institution we trusted to protect us. Not only did the university not reserve enough hotel space to house students who had been exposed to the virus, but they did not provide sufficient resources to those who were in quarantine. I, Sophie, personally experienced this when I tested positive for COVID-19 in Feb. 2021. Resident Advisers were also not given hazard pay after interacting with COVID-19 positive individuals, and staged a protest at the university gates as a result.

One year later, the university is no longer running surveillance testing, even though they have done so in the past. Case numbers are rising again due to the Omicron variant — which the university has hardly acknowledged. Quarantined students are not provided with the option to attend classes remotely, and isolation periods have been decreased to lengths as short as three days in order to make room for overwhelming numbers of cases. Perhaps one of the university’s most significant shortcomings is a lack of open communication with students, especially when it comes to campus safety. Students often learn of potential dangers to campus through social media platforms such as YikYak, rather than the Wake Alert system — whose responses to these dangers are often insufficient and delayed.

YikYak also helped organize a student-led protest against the readmission of a student who allegedly faced multiple Title IX allegations in August. Following this decision, one of the women who filed a Title IX allegation against him chose to withdraw from the university, claiming that she was not informed of his readmission and no longer felt safe on campus. The subsequent protest drew hundreds of students. Throughout this entire ordeal, the university failed to act for humanity. The other students in Poteat Residence Hall were not informed of this students’ readmission, and this student’s readmission was never actually acknowledged.

This is only a fraction of the abandonment and apathy that survivors of sexual assault have faced. The university has not provided these people with a safe environment away from those who committed crimes against them, nor sufficient resources to confront their trauma.

In Spring 2021, when Black women organized a similar protest titled “To Whom Do We Cry?”, it was not met with the same response and support as August’s protest — from other students as well as campus administration.

This past Fall, students were informed that the counseling center would be switching to a new, single-session model, meaning that students would only be provided with one to four sessions of counseling to deal with their concerns or troubles, and those with a need for prolonged or long-term counseling would have to seek out off-campus resources. Once again, the university seemingly deserted students in need of help.

This pattern of indifference towards student well-being was most recently displayed in the university’s response to the Weaver Fertilizer Fire. Wake Alert did not send out a message about the fire until 10:21 p.m., two hours after responders had arrived at the scene of the fertilizer plant. Students weren’t informed of classes being canceled until 12 a.m. Tuesday, and weren’t notified about the cancellation of Wednesday classes until late Tuesday afternoon. Throughout the ordeal, students only received two emails from President Susan Wente, with the majority of their questions and concerns being sidelined and ignored until Wente’s second email on Feb. 3.

Around 1 p.m. on Wednesday, the university announced that classes would resume in person on Thursday, an announcement that made little sense due to the continued presence of irritant particulate matter in the air on campus, and the continuation of the voluntary evacuation order. This attempt to resume regular campus operations was particularly jarring considering the actual proximity of the fire to the Reynolda Campus. While most of campus lies outside of the evacuation zone, areas of campus were actually within it, and some dorms, such as Magnolia Residence Hall, were less than 1,000 feet away.

This decision was only reversed after tremendous pressure was placed on the administration from students, faculty and parents. The university has made it clear that they intend to add those four days of missed classes back to the academic calendar — another nonsensical decision. These four days didn’t function as a true break for anyone and as a private university, Wake Forest is allowed to be flexible in the number of days on its academic calendar.

While a lack of Pro Humanitate has been felt by every student at Wake Forest, it is especially apparent to those who do not come from privileged backgrounds.

“As someone from a more disadvantaged financial class, I see [a] lack of empathy from the administration. Pro Humanitate seems to sometimes only apply to the most privileged … students here, [while others are] left to scramble to try and force their way into the ‘loving’ arms of the university,” freshman Breanna Laws said.

While the university has awarded many economically disadvantaged students impressive amounts of financial aid, it does little for these students once they arrive. There are resources in place for students from diverse backgrounds, but they’re not advertised — rather, students are expected to know how to find and access these resources without being told.

First-generation students are often tossed into the water, unsure of how to navigate their college experience or what they should be taking away from their classes. Rather than being guided by the university, they’re subjected to a sink or swim mentality.

This lack of guidance and support from the university is also evident in the experiences of international students. As an international student who was unable to attend classes in person on campus for my first semester of freshman year, Wake Forest did very little to help orient me, Maryam Khanum, when I finally arrived on campus for the Spring 2021 semester. I did not understand the area I lived in, did not know anyone and did not have access to any resource that could help acclimate me with my new surroundings. I was left largely to my own devices and was forced to integrate myself onto campus with very little assistance from the university.

Moreover, in early October, the Office of Residence Life and Housing told international students they would not be providing on-campus housing to those staying over Winter Break. This decision seemed callous in light of ever-changing quarantine and travel regulations that made it difficult to travel internationally, as well as the fact that the university had provided this housing in the past. Similar to the response to the Weaver Fertilizer Fire, this decision — which never should have been made in the first place — was only reversed after tremendous pressure on the university from many directions.

“Sometimes I feel like the university is really enacting Pro Humanitate in our surrounding communities,” sophomore Yushuo Wang, who was personally affected by the housing issue this past fall. “But … there [should be a] balance between on-campus and off-campus Pro Humanitate. Both the [international] housing issue and the fire … make me feel it takes too much [time and] effort [for] the university [to] make a change, and it shouldn’t be like that. … I’ve seen so many students contributing and trying to overturn what the university has been doing … If it’s only the student body and some faculty and staff who are enacting Pro Humanitate, not only do our efforts not pay off but we feel depressed by the administration, [who should be] the key of our motto.”

The university needs to learn from its past mistakes and back its Pro Humanitate motto with action by making campus a safe and welcome place for everyone — rather than continuing to force the responsibility of improving campus on its students and staff.