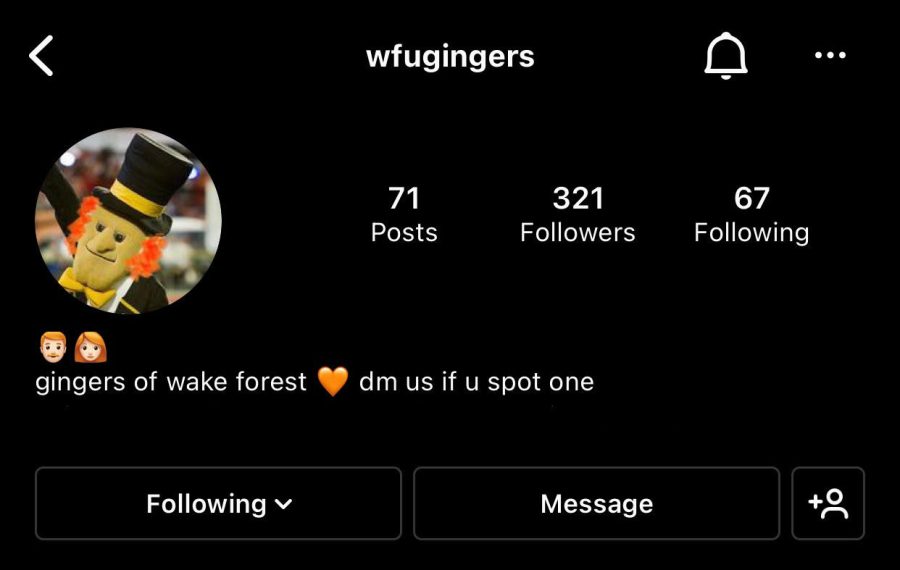 Wake Forest students who have been active on Instagram lately may have noticed the rise in popularity a certain Instagram account with the username @wfugingers. Their Instagram bio reads, “Gingers of Wake Forest, DM us if you spot one.” Currently, the account has over 300 followers and 70 posts, all of which highlight members of the Wake Forest community that have unique red hair.

The account encourages students to send in photos of their friends and peers with red hair, whether it be a candid or posed photo. Although this type of social media account may seem strange to some, the creator of the account, who wishes to remain anonymous, was inspired by other “ginger” accounts they have seen at different universities.

“I have friends who go to Arkansas and they also have a ‘gingers’ Instagram,” the creator said. “There are a couple other [colleges] that I’ve seen that have similar accounts. I decided to make one during finals week when I was really bored.”

The creator decided to start the account out of a spur of boredom with hopes to create a funny platform for students to engage with. Following the creation of the account, they were surprised by the number of red-haired students at Wake Forest and wanted to spotlight that community.

“I didn’t really have a goal, I just thought it was really funny,” the creator said. “I wanted people to send stuff, so I would plug the account on Yik Yak and tell people to follow the account. I [also] just noticed that there were a lot of gingers at Wake.”

The account was created just before winter break but didn’t take off in popularity until students returned. The creator credits the rise in popularity to friends sharing the account and posts, as well as students seeing their friends’ photos on the page.

“I think in the beginning it started out very anonymous and people would send more “sneaky” pictures,” the creator said. “It definitely gained popularity when people would see their friends submitted without their knowledge. Some people would repost [the posts] on their story.”

While the term “ginger” varies in definition from person to person and is usually defined by a person with red hair, the creator is open to photos of anyone with relatively “reddish or orange hair.” The creator also enjoys posting submitted photographs of someone who is questionably ginger, allowing the comments to debate whether they fall under this category.

“If they are someone who is really not ginger but the picture portrays them as ginger, I usually post it and let the comments fight it out,” the creator said. “If someone’s [photos are] getting sent in, then clearly people think they’re a ginger.”

Although some popular Instagram accounts sometimes do a “face reveal” — sharing the identity of the creator — after they gain a certain amount of followers, the creator of @wfugingers has no intention of exposing their identity.

“I feel like it would become too personal if people knew who I was, and then they would know who they were sending the pictures to,” the creator said. “I wanted to remain unbiased. Also, the account isn’t about me, it’s about the gingers.”

The account’s creator recognizes how Instagram accounts like theirs can help bring university communities together and is proceeding with the ultimate goal of having fun and providing comedic relief for Wake Forest students.

“As long as it’s fun and I have a fun time making captions and such, I’ll keep it going,” the creator said.

Although sending in anonymous photos of friends to an Instagram account can be humorous for some, students may run into the issue of sending photos of their friends without consent, especially when they are taken candidly. The creator has run into a few issues of students messaging them asking to have a photo removed, but they always respect the decision of those in the photos.

“I’ve had some drama with people messaging me immediately after I posted asking me to delete the photo,” the creator said. “One time someone sent in a picture and it had alcohol and Greek letters in the background, so they asked me to take it down, and I did. I respect when people want me to remove posts.”