Putting a spotlight on Wake Forest’s own Sea Shanties band, which has released multiple albums 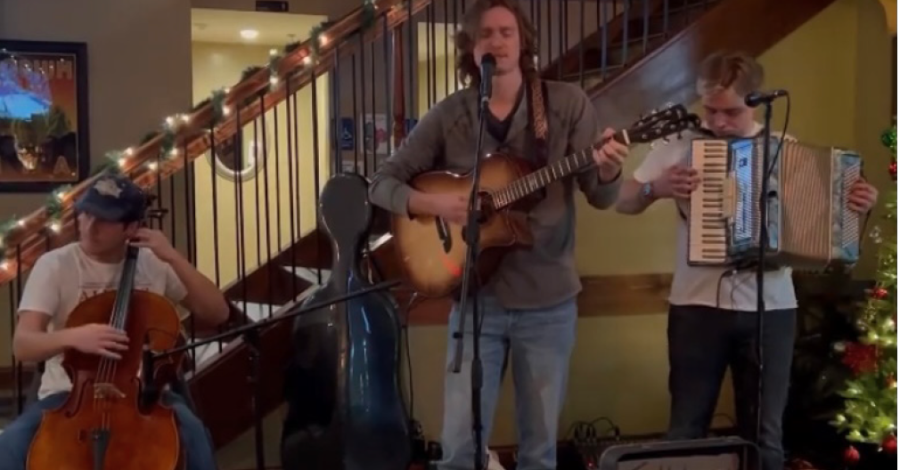 Folkknot regularly performs at bars and resturants around the Winston-Salem, Greensboro and Charlotte areas.

According to their Instagram bio, Folkknot — Wake Forest’s Sea Shanty orchestra — has been “making sea shanties since it was cool.” The three-person musical group has brought this genre of traditional folk music to the Wake Forest community since it was first founded in 2020, both through live performances and its two albums that have been released.

“Sea Shanties” may seem to be a relatively obscure genre of music, but many students may be familiar with the concept from a burst of popularity that the genre received over social media; the song “The Wellerman” by Nathan Evans became viral on TikTok in 2020, bringing the unique sound into the limelight.

“It was wild to have our niche music sound reach the mainstream; we definitely benefited from it,” guitarist Grey Hyatt said.

The founding members — alumnus Grey Hyatt and junior Marcos Lammel-Knebl — were brought together by a freshman-level organic chemistry class. After a nighttime lab led them to grab dinner together, and the discussion turned to their shared love of music and playing instruments.

“It came together because we all figured out that we liked that genre; the seafaring theme struck well with all of us, so we decided to go with it and make it our theme,” Hyatt said.

The original combination of instruments was successful in recreating the songs’ melodies, but the members felt that the band could benefit from an addition that would create a “deeper sound.”

Lammel-Knebl’s solution began with an impromptu trip to Asheville, where he bought a $200 accordion and began to teach himself how to play it. The accordion’s over 200 buttons, none of which are visible to the musician playing it, took him “a few days to get comfortable with,” but soon Lammel-Knebl began performing with the new instrument. Later, Folkknot also added cellist Nathan Faulk and further diversified their melodies.

Currently, Folkknot travels to bars to perform live, mostly at venues in the Piedmont Triad. Though COVID-19 restrictions in most breweries have been lifted, the band still has some trouble finding areas willing to have live music in some areas, such as vineyards.

“On an average week, I send out around 60 emails and hear back from maybe five percent of the places I contact. There’s a lot of back and forth, but it’s been mostly fruitful,” Lammel-Knebl said

Hyatt describes their first album, “A Disease Called the Sea,” as a “concept album” loosely inspired by his grandfather’s experiences in the royal navy as a young adult and lifelong love of sailing.

When recording “A Disease Called the Sea,” each of the band members was quarantined in separate locations due to COVID-19 lockdowns, so the production process was unconventional — the entire album was recorded on iPhones. Every member recorded their parts separately and sent them to each other for reference before the next piece was documented.

Hyatt then stitched together the pieces using the app GarageBand, and the final product was released on multiple streaming services, including SoundCloud, Apple Music and Spotify. In the future, the group hopes to remaster this album using the professional equipment that they have since purchased.

“We’re hoping to release our music physically — whether that be on CDs or Vinyl — and touch up the sound as much as possible,” Hyatt said.

Conditions for recording the second album, “A Life Well suffered,” were more favorable; by 2021, when it was recorded, Folkknot had access to professional microphones and a recording room that allowed for more consistent acoustics.

Finding money for adequate equipment remains to be a challenge, but the band has reinvested their money earned from gigs into “investments” that will result in a louder and clearer sound during live performances.

“Playing music for a living would be a dream, but that’s a huge mountain to climb,” Hyatt said. “For now, I just want to keep writing new music and making a decent name for ourselves locally and see where it takes us.”