Baseball looks to shock the nation 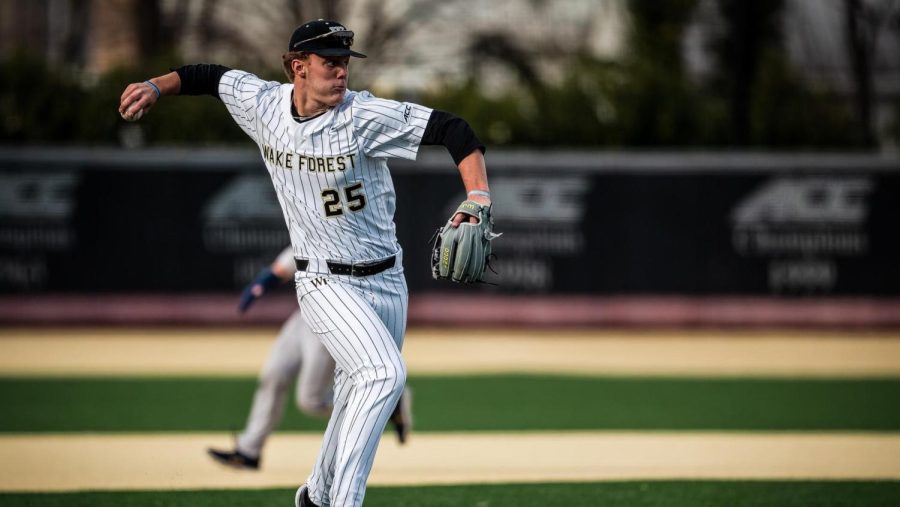 3B Brock Wilkin hopes to lead the Demon Deacons to success this season.

In 2021, there were hopes that Wake Forest baseball would return to the mountaintop of college baseball — a return to Omaha for the College World Series. It was supposed to be “their year,” in response to the turmoil of a lost season in 2020.

Unfortunately for Wake Forest, the season never lived up to the hype. The Deacons finished with a 20-27 overall record while going 10-22 in the ACC, good for second to last in the conference.

But now, a new season is upon Wake Forest, and the hope is reignited for a run in the ACC and a return to the NCAA Tournament for the first time since 2017. A return to the College World Series in Omaha would be the Demon Deacons’ first since 1955, when they brought home their only national title.

With every new season comes projections. There is ample talent coming back to the Demon Deacons, but much of it is young talent. With that in mind, Wake Forest was picked to finish sixth of seven in its division of the ACC.

Redshirt sophomore Eric Adler explained that the team relishes being the underdog.

“What’s really impressive about this team is [that] we don’t talk about rankings,” Adler said. “Last year, [we were] supposed to be No. 17, all this and all that. And we just weren’t. Personally, I’m glad we aren’t ranked and seen as a team that can only go up from last year. I think that we have the skills to get the job done.”

Overall, 20 players return to the Demon Deacons for another season, with that number being evenly split between pitchers and field players. Wake Forest is bolstered by two returning starting pitchers — sophomore Rhett Lowder and redshirt sophomore Reed Mascolo. Lowder went 4-2 in 2021 with a 6.12 ERA. Despite winning one less game (3-2), Mascolo had a significantly better ERA (4.37). Potentially beating out Mascolo to start though, according to Head Coach Tom Walter, could be sophomore Teddy McGraw, who threw a 4.42 ERA in 18.1 relief innings in 2021.

Returning to the Wake Forest pitching staff are eight pitchers who did not start last year. That group is headlined by Adler, who, as the team’s closer, threw a 2.00 ERA with 24 strikeouts. Adler has been recognized as a preseason third-team All-American by Baseball America.

Other notable relief pitchers on the staff include sophomore Camden Minacci (5.13 ERA in 26.1 innings), redshirt junior Brennan Oxford (5.40 ERA in 25 innings) and sophomore Crawford Wade (9.94 ERA in 17 innings). Seth Keener, a sophomore who struggled with a 9.93 ERA last season, has been tabbed by Walter as the likely mid-week starter.

Four starting field players return to the Demon Deacons, fueling a need to fill half of the field with those who were previous bench players. Sophomore Brock Wilkin brings the biggest bat in Wake Forest’s lineup, hitting 17 home runs and batting in 44 runs last season. Redshirt junior shortstop Michael Turconi returns with the best batting average on the team (.292). Sophomore Lucas Costello is back in center field following a five home run, 31 RBI and .279 batting average campaign in 2021. Lastly, redshirt sophomore Pierce Bennett returns as a utility player after hitting one home run last year.

Along with the returning players, there is much excitement surrounding the newest members of the team — the freshmen. Highlighting the newest class is pitcher Josh Hartle, the No. 25 recruit in the country and the No. 2 player from North Carolina. As the North Carolina Gatorade Player of the Year, Hartle was also ranked the 34th-best prospect in the 2021 MLB Draft.

Hartle’s personality masks the fact that he is one of the best prospects in all of baseball.

“He’s a great pitcher, everybody knows that,” Adler said. “He’s the kind of guy that, if you didn’t know he was Josh Hartle, you would talk to him, and you would have no idea how good he is. He’s the most down-to-earth guy. He really wants the best for his team, he works his butt off every day just like us.”

Other notable freshmen include infielder Danny Corona, from the Baylor School in Chattanooga, TN, who chose Wake Forest over powerhouses like Vanderbilt, Stanford and Tennessee. As the No. 161 recruit in the nation, he was selected in the 16th Round by the Pittsburgh Pirates but chose not to sign. Walter has tabbed him to start at second base. Troy McGirt was rated the No. 1 first baseman in North Carolina and could be the answer to replace the drafted Seymour. Gio Cueto, the No. 8 catcher from Florida, has a chance to secure some playing time at catcher. Lastly, Tommy Hawke, the No. 16 recruit from North Carolina, attended the same school as Hartle, where they both won a state championship.

One last freshman’s skill has caught the eye of Wilkin — Nick Kurtz.

“That guy is unreal,” Wilkin said. “His exit velocities are 104 plus [miles per hour]. He’s honestly one of the best hitters. He’s probably one of our better first basemen as well. He’s one of the best freshmen in that class for sure.”

With the talent on the roster from newcomers to returners, there is much to be excited about for the 2022 Demon Deacons. They are underrated with a chip on their shoulder and have everything to prove.

“Our potential is limitless,” said Lowder. “We said that in past years, like last year, we had a really good staff. We’ve all had the stuff. We’ve always had the stuff. [But] we never quite knew how to utilize it on game day. I think a lot more practice on that this year is going to be big-time.”

The Demon Deacons will have a chance to realize their limitless potential when their season begins at home against Lafayette on Feb. 18.