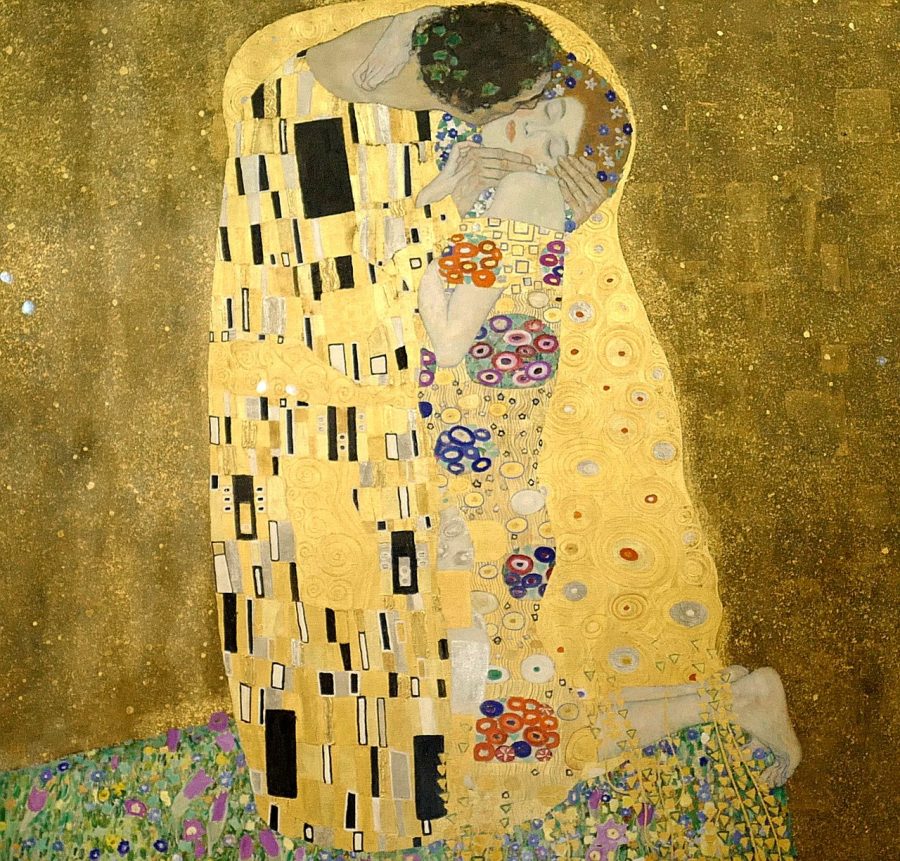 Klimt's "The Kiss" is a painting from the early 20th century.

Austrian artist Gustav Klimt’s “The Kiss” — an oil painting on canvas with gold leaf, platinum and silver accents — depicts a man and woman in a world of gold.

The couple is frozen in place, kneeling in a meadow of blue, yellow and green flowers with a scattering of scarlet. The man wears a cloak covered in intricate, rectangular patterns of black, white and gold, and he is crowned with vines. The woman wears a dress of floral circles with bright shades of red, green, blue and gold; she has flowers in her hair and gold chains wrapping her feet. Their bodies are brighter than the background as if the light of their embrace brightens their surroundings. He cradles the woman’s face, kissing her cheek with his head turned away from the viewer. The woman’s face is upturned, her eyes are closed as her arms surround him, centralizing her expression.

Painted in the early twentieth century, the work fully illustrates Klimt’s bold and luminescent golden period of creating. “The Kiss” is considered his most famous work, but other notable pieces are “Portrait of Adele Bloch-Bauer”, “ Beethoven Frieze” or another shiny, intricate geometric piece wrapping of figures in metallic flakes that could either be attributed to Klimt or an outgrowth of the ornamental Art Nouveau style. His creativity, expression and energy — which lies in the contrast between life and radiance — has inspired generations of artists by taking work from the past and creating new messages of love and eroticism using such a highly decorative style.

Though not well received by religious and popular culture at the time, “The Kiss” is particularly reminiscent of the Basilica of San Vitale in Ravenna, Italy. This structure was constructed during the reign of Emperor Justinian I and holds many well-preserved Byzantine mosaics from hundreds of years ago. For reference, Byzantine art — primarily in the 6th century — utilized gold mosaics and natural light within churches to explore the glory of God and transform the worshiper. Thus, while Klimt’s work is not religious, his reference to divinity, beauty and splendor is apparent.

I love this piece. It is one of my all-time favorites, and yet I am still confused by it. And I’ll admit, I’m not the most-well versed art-connoisseur. I can recognize the big names and even bigger styles, but I love art museums, student galleries and online platforms because there are so many ideas that people express about love, life and more — all with varying degrees of popularity. Furthermore, communication can be so wide-ranging. You can look at Klimt’s piece and compare it to other pieces exemplifying the embrace of lovers in such contrasting expressions. Constantin Brancusi’s “The Kiss”, a limestone statue in the pure, cubic form of a couple morphed together, is one such work.

An interesting aspect about art is that you can look at a painting — even knowing that someone like Klimt’s inspiration comes from Egyptian, Byzantine and Minoan influences — and recognize other elements that add to its interest. For instance, the Art Nouveau attributes that were popular in 1900s Vienna and the impact of Japanese prints, illuminated manuscripts and the modernist style can be recognized in Klimt’s pieces I can see the gentle intimacy of two people alone in the world, the quietness of comfort, the conception of simultaneous delight, rapture and the weight of such a relationship. However, some also see abandonment or possible resignation in the woman’s face — which is possible with her unusual expression — but with her hand on his, I think it’s more about privacy. And, there are so many interpretations beyond this that merit consideration.