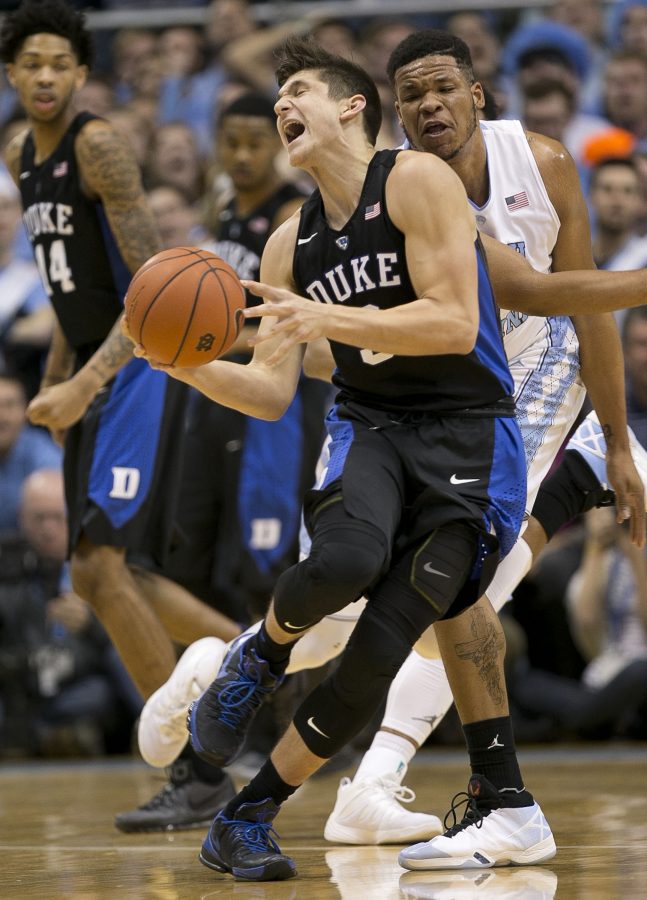 Christian Laettner, J.J. Reddick and Grayson Allen. All three are in the long lineage of star basketball players at Duke. They are also white. And they are all also hated.

Allen might have not quite reached the ironically revered status of being hated yet, but if he has not, he is close.

Only two weeks ago, ESPN senior writer Dana O’Neill forecasted that Allen could be the next in a list of hated whited Duke basketball players that also includes recent players such as Greg Pauus, Jon Scheyer, and ‘90s players Steve Wojciechowski and Chris Collins.

Her story has almost seemed prophetic. Since then, Allen, who averages 21 points per game, responded to fouling out on a charge call in a 71-64 loss to Louisville by yelling profanity at the referee to get a technical. In that same game, Louisville forward Jaylen Johnson elbowed Allen in the face only to say he did it because Allen struck him first.

Oh, Allen also hit the game-winning free throws to beat rival North Carolina three days earlier in a game where Duke only had the depth to play six players after halftime. Before that, the 6-foot-4-inches guard hit a buzzer beating, game-winning shot to beat No. 7 Virginia on Feb 13. Not to mention, he was the hero of last year’s national championship victory over Wisconsin when he came off the bench to score 16 points.

This is all in the 16 days since O’Neill’s story. It doesn’t include him tripping Louisville’s Raymond Spalding on Feb. 8. Nor does it include Allen’s relentless drives to the basket, high-flying athleticism (he won the 2014 McDonald’s All-American Dunk Contest) or his in-game swagger which does not border on cockiness — but likely is.

After Duke’s Feb. 20 loss to Lousiville, Cardinals head coach Rick Pitino managed to stay away from commenting on Allen’s demeanor, solely saying that “he is a great player.”

Duke’s coach however, the legendary coach Mike Krzyzewski, could not resist.

“[If] you take a look at it (the charge call), it’s not close — whatever close means, it’s not close,” Krzyzewski said. “Look he has been beat up the whole season and he is a warrior. He is one of the great warriors playing college basketball. But he doesn’t get what he is a warrior for at times and so his reaction is one you know. Would we like him to not have that reaction? Yes. Do I understand why he had it? Yes.”

Laettner’s Duke teammate Grant Hill acknowledge the 6-foot-11-inches forward was a jerk. Reddick has admitted he was a prick who would play up the crowd’s vitriol.

And with Allen’s recent actions and rise to stardom, what he will do next is unpredictable. Will he taunt the crowd? Will he punch someone below the belt like Chris Paul did to N.C. State’s Julius Hodge while at Wake Forest? After all, Louisville’s Johnson already claimed that Allen has hit him.

While at 6-foot-4-inches, Allen lacks Laettner’s size and Reddick’s elite three-point shooting, but he still connects on 35 percent of his three-point attempts and adds more rebounding, assists and overall athleticism than Reddick.

Who wins the most in this hate triangle, though? College basketball and its fans. Allen is already a terrific player to watch on the merit of his own talent. For those who want someone to hate, however, they have a new target.

Allen and Duke are becoming must-watch television for basketball fans.