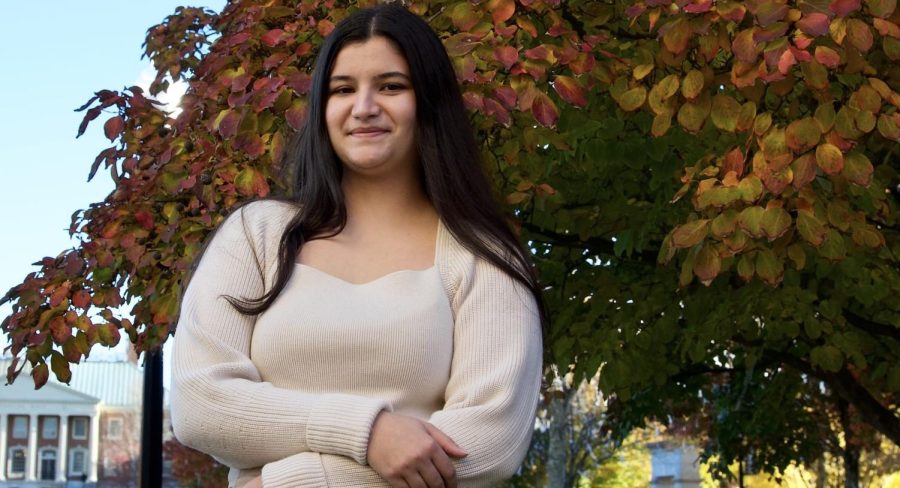 Pilar Agudelo is a junior from Portland, OR majoring in Politics and International Affairs and serves on the Sexual Assault Prevention, Support and Accountability (SAPSA) committee as co-chair. Agudelo helps guide the SAPSA committee to work with Student Government, university administration and students to create a safe and supportive environment and to promote healthy sexual behaviors and relationships on campus. Agudelo continues to lead SAPSA while studying abroad in Venice, Italy this semester.

What sparked your interest in taking a leadership position in SAPSA?

I had a lot of experience talking with survivors and students about sexual health, so the committee was something I was really passionate about. I also think that I had the kind of previous experiences to help back up what I wanted to continue working on. I have been part of Title IX processes before, as an RA and as a witness, so I was familiar with that aspect as well.

Can you describe you and your committee’s relationship with the Wake Forest administration? How do they support you and your efforts?

I would say there’s a combination of factors. The first is that Jackson Buttler and I, as co-chairs, meet directly with administrators on either a bi-weekly or sometimes weekly basis. Eventually, the goal is to bring people into the committee space to have important conversations moving forward and I would say that right now a big part of our focus has been planning for the release of the campus climate survey.

A lot our time is spent talking to administrators about when that survey is happening and what the components are, then reporting back to our committee and getting their feedback. Then, we report back to the administration. It’s kind of a circular function.

Can you tell me more about your work on the climate survey?

The Campus Climate Survey is a survey that a lot of universities across the country conduct, and it’s usually used to measure the campus climate and gauge student perception of either resources on campus or the lack thereof. It’s a way for a university to do a more in-depth dive into how their campus is unique from other campuses and to really understand what specific issues they need to face, target or reflect upon in terms of solutions.

The role of the SAPSA committee in that regard is to help advise on what the rollout of that survey looks like, support students taking it and communicate the results of the survey. Once the survey is done and everybody has submitted responses, our job is to also advise on potential policy changes and answer questions about how to reach students.

Are there any other specific objectives you are hoping to achieve this year through your participation in the committee?

The campus climate survey is specifically focusing on sexual misconduct and assault on campus. As a committee, and personally, the belief is that this really is an issue. We may not know the exact nuances of the issue, so that’s what the survey is trying to do — to find out what we need to do at Wake in order to target education interventions and positive sexual health interventions.

The second big goal is to be student advocates and activists. It’s really important that we are reflecting on what students need and want, especially students who are often marginalized in these conversations.

I think a third big goal is to bring some understanding to campus that we as a community are a resource for students. We’re not just doing the communication between administration and students, but we also want students to feel comfortable coming to us. The goal for this committee is to be a place for students to come where they can feel supported and safe.

How do you, personally, want to promote and influence safe and healthy sexual behaviors on campus?

For me, it’s really being willing to have conversations with people. When people make certain jokes, I think it’s about having both the courage and understanding to be like, “hey, I know you’re joking, but those are the kinds of jokes that influence behavior.” We see this a lot with our understanding of consent across the U.S. and across our pop-culture references; there’s a misconception about the involvement of drinking with consent. A lot of our education reinforces drinking as the root cause of these bad situations when that’s not necessarily true. A lot of the time those situations are about power dynamics.

I know I just talked about something very serious, but the other way to engage students is to have fun with it, like with my work with the Office of Wellbeing when we helped plan Sex Week last fall. There are ways to open up the floor to communicate about happy and healthy sexual relationships, and so the other goal of mine is really engaging students with fun ways to talk about sex.

What do you feel you have accomplished this year?

I think one of the things for me personally that I’ve also come to appreciate is setting foundations for other students. On average, students are here for four years and while I would like to say that all the change in the world can happen during that time, the reality is that that is not always the case. I think for me, both recognizing that fact and understanding that I’m not going to see everything that I want to see on Wake Forest’s campus happen in my time here. It’s also being willing to set roots for students to continue doing the work I’m doing in their own ways and with their own unique strategies.

I would say the second part of that appreciation is really working to build trust with students. Building my relationship with students is something that was really important to me.

The hope is that even years from now, those students will still feel comfortable reaching out to me and connecting over a Zoom or FaceTime call. Having those connections is rewarding for me and helps other students feel better about their experiences at Wake Forest.