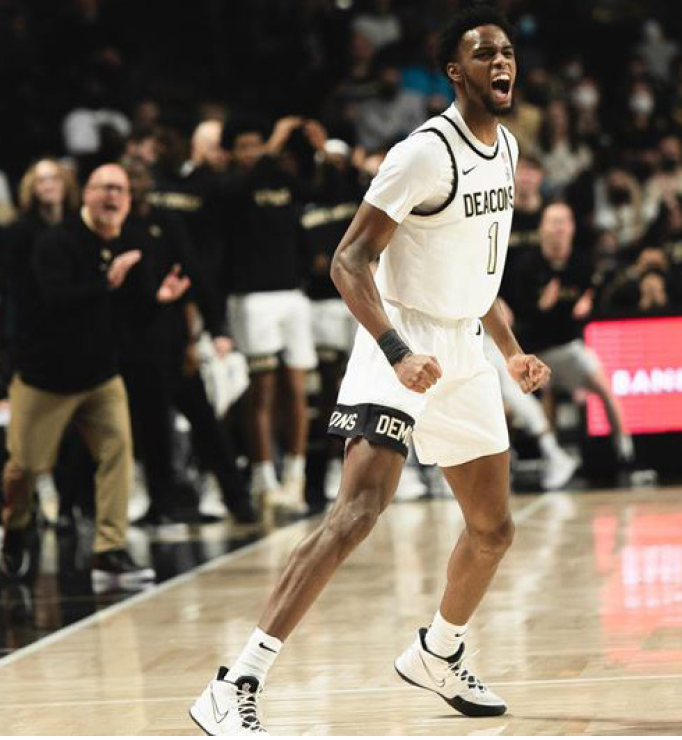 Wake Forest’s men’s basketball was put to the test this past week, taking on both the first and second place teams in the ACC.

With the score knotted up at 74 in the final seconds of the game, Duke freshman Paolo Banchero drove to the basket and missed a layup. However, sophomore big man Mark Williams was right there to slam it home and give the Blue Devils the lead with less than a second remaining. There was some controversy about whether or not the play was basket interference — which was the call on the floor — but the referees went to the monitor and decided to count the two points.

After the put-back dunk, sophomore Damari Monsanto had a shot at a full-court heave to win it, which was incredibly close, but it ricocheted off the backboard and rimmed out of the hoop.

Duke was dominant for the first 25 minutes of the game, leading 57-38 five minutes into the second half. The game was shaping up to be a blowout, with the whistle never going Wake Forest’s way and star player Alondes Williams in foul trouble.

The Demon Deacons finally found their stride in the second half and exploded on a 23-6 run, which cut the deficit to just two with eight minutes left to play. Duke stretched the lead back to nine with four minutes to go, but Wake Forest kept fighting, forcing turnovers and making plays to give themselves a chance to win.

“We changed the game when we put our big lineup on the floor,” Forbes said. “It caused them some problems, we finally got some stops and we were pretty good in transition.”

“There’s not many teams in the country that can throw out the size that Wake has at every position,” acting Duke Head Coach Jon Scheyer said, who coached the second half of the game because head coach Mike Krzyzewski wasn’t feeling well.

Following the trip to Durham, Wake Forest hosted a Notre Dame team that entered the game having won nine of their last ten.

Wake Forest started the game strong, but the Fighting Irish caught fire from deep, as five different players combined to knock down nine long balls. They led by as much as 12 in the first half.

Star freshman Blake Wesley scored 15 points for the Irish in the opening period and finished the game with 24 points, drilling six three-pointers.

“A big key was that we weathered the storm and went into halftime only down six,” Forbes said.

Notre Dame played a zone defense for most of the game, which gave the Demon Deacons some trouble. Offensively the team was pretty stagnant in the first half, settling for some subpar looks. Forbes and his staff made an adjustment in the second half in order to create more motion and isolate his players in the post.

This game came down to the wire. Senior forward Isaiah Mucius knocked down a huge three with 80 seconds left to play to stretch the lead to five, but Notre Dame’s Cormac Ryan answered with a three of his own 12 seconds later. Williams drove to the basket, spun and laid it in.

LaRavia scored 20 points, making 10-11 free throws. He dished out five assists and grabbed nine rebounds as well. If LaRavia grabbed one more rebound, he would have become the third Demon Deacon with a double-double in the same game.

Wake Forest dominated on the boards as a team, out-rebounding the Fighting Irish 43-27, including a 16-2 advantage on the offensive glass. The big lineup that Forbes utilized in the Duke game was effective once again.

“We were going to have to score and make shots to beat them,” Notre Dame Head Coach Mike Brey said. “What a waste of bullets that you make 14 [three-pointers] on a night and you can’t get out of there [with a win].”

Entering the game, Notre Dame was 11-0 in games where they knocked down 10 or more three-pointers.

Over 8,000 fans were in attendance at the Joel Coliseum and created a great home environment that was active and engaged in the victory.

“That was easily one of the best crowds we have had this year,” LaRavia said. “They were super loud; it was a great atmosphere.”

“The crowd was unbelievable today,” Forbes said. “I think they helped us a lot down the stretch.”

The win over Notre Dame was a crucial one in terms of making the NCAA Tournament. After dropping close ones to Miami and Duke, the Demon Deacons couldn’t afford to miss out on this opportunity to add a quality win to the resumé. Wake Forest is now safely in the field heading into the last three games of the regular season, but a bad loss would do damage in terms of seeding.

After a trip to Clemson for a Wednesday night battle, Wake Forest hosts Louisville at home on Feb. 26.