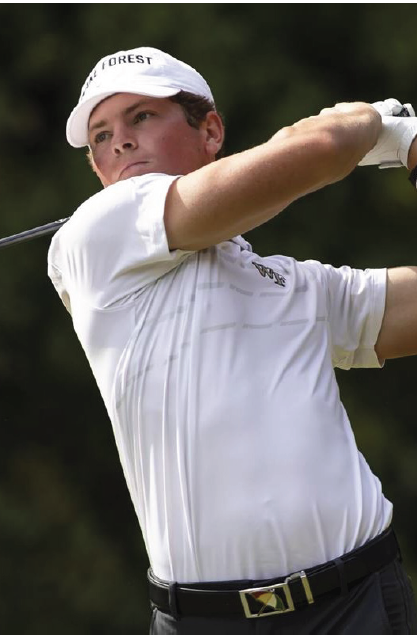 The Leesburg, VA native shot an impressive 66 (-5) to capture the title and earn a spot in the upcoming PGA TOUR event Genesis Invitational at Riviera, which began on Thursday. Riviera Country Club is known for being one of the most difficult courses on the PGA TOUR schedule each year. Its deep bunkers and slippery greens provide a brutal test for even the best golfers in the world.

“I drove it straight today, that helps a lot,” Brennan said of his success.

Wake Forest golfer Will Zalatoris played alongside Brennan in the showcase and commented on Brennan’s power throughout the round.

“I’ve obviously gained some distance, and he was hitting it 10, 15 [yards] by me,” Zalatoris said. “I’m one of the longer drivers on Tour and he’s hitting it by me, so, especially on a 7,300-yard golf course, that helps a lot.”

Brennan’s 66 was enough to win by two shots over Washington’s RJ Manke (68) and three shots over Arizona State’s David Puig (69).

After an exciting Monday, the stage was set for Brennan to make his TOUR debut as the only amateur in the field at the Genesis Invitational. Before the tournament started, Brennan had the opportunity to play a practice round with four-time major champion Rory McIlroy and get some advice from the seasoned TOUR pro. As they walked off the 18th green after their practice round, McIlroy advised the sophomore: “play your game. Take it in stride.”

Currently hosted by Tiger Woods, the Genesis Invitational typically features the best players in golf. Last week’s edition included all 10 of the Top-10 players in the world golf rankings. World No. 20

Joaquin Niemann set the tone from the very start of the tournament, shooting a pair of 63s on Thursday and Friday to set a new 36-hole record at Riviera at -16. Brennan opened up on Thursday with a steady 71 (E), then fell back on Friday with a 73 (+2). At +2 for the tournament, Brennan missed the cut by two shots and did not make it to the weekend. However, he showed serious promise during his first 36 holes on the PGA Tour.

During the weekend, Niemann continued to dismantle each obstacle that Riviera threw at him, shooting 68-71 to win the tournament at an incredible 19 strokes under par. The Chilean star became the first wire-to-wire winner of the Genesis Invitational since Charlie Sifford did it in 1969. With his victory, Niemann brought home a whopping $2,160,000.

Just two shots behind Niemann was Wake Forest alum Cameron Young, who finished T-2 at 17 strokes under par. A 62 (-9) on Friday gave Young the low round of the tournament, and he eventually played in the final pairing with Niemann on Sunday. His stellar play over the course of the tournament earned him $1,068,000. On top of that, his impressive performance against the best players in the world could give him a big confidence boost for the rest of the 2022 golf season. Young’s former roommate Zalatoris also made the cut and ended up just outside the Top-25 at six strokes under par.

Overall, it was a thrilling week for the Wake Forest golf program. Brennan’s victory at the Genesis Invitational Collegiate Showcase and his PGA TOUR debut were major accomplishments. Young’s second place at the Genesis is tied for his highest finish in his career (he also finished T-2 at the 2021 Sanderson Farms Championship). Zalatoris did not play his best, but he still squeezed out a T-26 finish.

The Demon Deacons are making waves across the golf world, and that doesn’t appear to be stopping anytime soon.