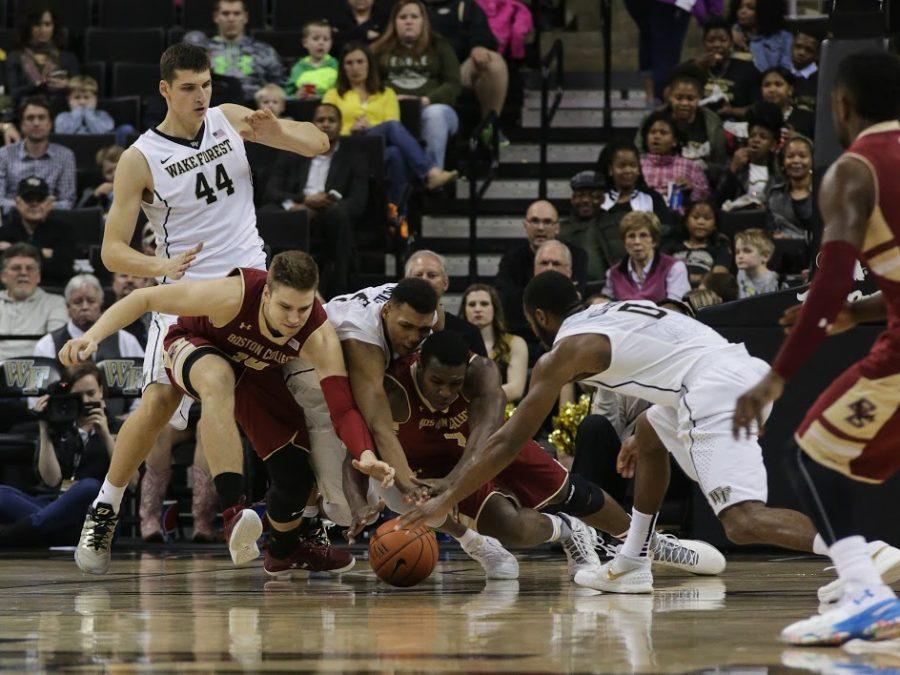 The Wake Forest men’s basketball team had to deal with less than ideal circumstances ahead of their most recent games this past week. It was announced last Friday that senior Devin Thomas would be suspended for two games while sophomore forward Cornelius Hudson was being removed from the team permanently.

This had to be extremely tough news for the players themselves and especially for the rest of the team. With little left to play for this season, it would not have been shocking if the Deacs had just thrown in the towel and lost the remainder of their games. However, the team responded with incredible passion and drive instead.

On Sunday night at the Joel, the Demon Deacons put together perhaps their best game of the season, and certainly their most dominating one against the Boston College Eagles. The crowd was rocking throughout the game and the Deacons responded in an amazing fashion. The Deacs got off to an extremely hot start and never looked back. Wake Forest started the game on a 14 to zero run and was up 37-4 with about four minutes remaining in the game. While Boston College is having a historically bad season, Division I college basketball teams do not do what Wake Forest did to Boston College in those first 16 minutes.

After all, Boston College nearly upset highly ranked North Carolina only a week ago. The Deacs would ultimately go into the half up 41-14. The Deacs played exceptionally well in nearly every aspect of the game.

They defended, shot, rebounded and hustled like they were playing in the most important game of the season. Without Thomas on the court, Demon Deacon fans were given a glimpse into the future of the program as Codi Miller-McIntyre was the only senior to log significant playing time.

Given the opportunity to play more than usual was freshman center Doral Moore. The seven-foot freshman played his best game of the season, scoring 20 points in 20 minutes. He was a dominating force around both rims, grabbing offensive and defensive rebounds, slamming home alley-oops and altering every shot Boston College took from inside the painted area.

Moore has quickly become a fan favorite, receiving huge rounds of applause any time he enters or exits the game, and in recent weeks fans have been clamoring to see more of him. Moore is going to be a huge part of the Demon Deacons success moving forward, and if he continues to play as he did against Boston College then he will quickly become one of the most dominating big men in the ACC.

On Wednesday night the Demon Deacons faced off against the Fighting Irish of Notre Dame. The Deacs once again found themselves without senior forward Devin Thomas and looked to freshmen John Collins and Doral Moore to carry the load in his absence.

The Deacs played very well in the first half, thanks mostly to the performance of their three freshman. The freshmen combined for 21 of the team’s 25 first half points and really kept the Deacs within striking distance as they headed into the locker room trailing by three points. Unfortunatley for the Deacs, Notre Dame quickly extended their three point lead to ten.

A combination of poor perimeter defense and an inability to finish at the rim greatly contributed to this Notre Dame run. To the Deacs credit they never quit and constantly fought back regardless of what Notre Dame did. Doral Moore once again was an unstoppable force on both ends of the court.

The Deacs were ultimately never able to come all the way back against the Irish and fell in another close conference game.

The Deacs; however, never showed signs of giving up which is extremely encouraging for a young team that has struggled throughout the season.

The way the three freshman have excelled in recent games is a great sign for the basketball program moving forward and is giving fans reasons to stay optimistic even trhough this tough season.

The crowd at both the Boston College and Notre Dame games was extremely loud and engaged, a far cry from the crowd at the Clemson game only weeks ago.

The team hit rock bottom a few weeks ago, but they have responded extremely well and are moving in the right direction headed into next season.

Wake Forest will host Virginia Tech on Sunday, Feb. 28 and will visit Duke on Tuesday, March 1.