The team now looks forward to the ACC Tournament, where it will fight for a March Madness bid 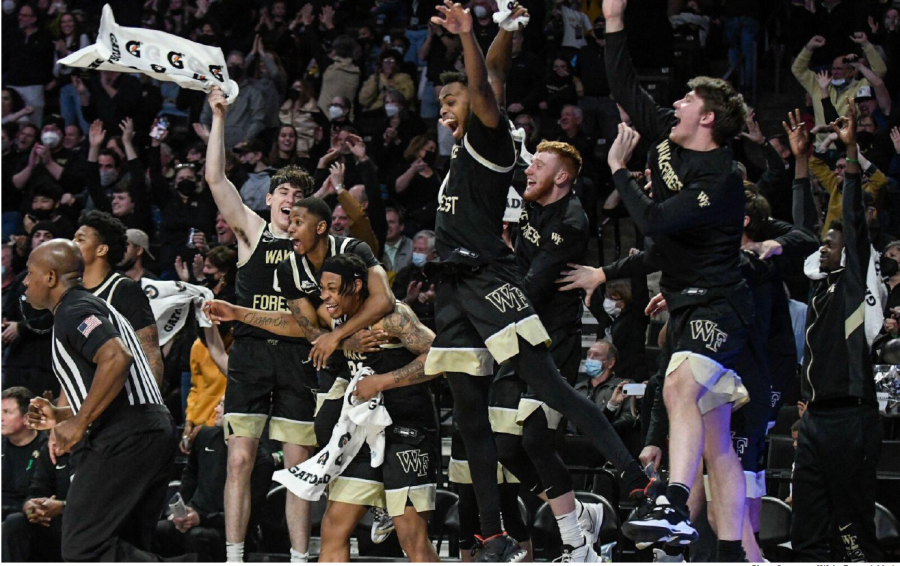 Wake Forest celebrates as a team.

Following a tough road loss to Clemson three days prior, Wake Forest bounced back in a big way on Saturday, beating Louisville 99-77.

“Give these guys credit for being resilient,” Wake Forest Head Coach Steve Forbes said after the game. “I thought we played with a great edge tonight.”

“Forbes had us inspired to play tonight,” said graduate center Dallas Walton, who tied his career high with 22 points in the win. “It was nice to get off to the start that we did and be able to maintain that level throughout the game.”

Walton put together an impressive and efficient performance offensively. He connected on 8-9 field goals, including 4-4 from long range. In his three previous collegiate seasons, he never even attempted more than two three-pointers in a game. He received a warm ovation from the crowd when he was substituted out in the final minutes.

“[Walton] didn’t play great on Wednesday night,” said Forbes. “But he came back like a good player does, and he played really well tonight.”

Junior forward Jake LaRavia also had a down game versus Clemson but got back on track Saturday with 23 points, including the 1000th point of his college career. He added seven boards, five assists and made 13-14 free throws.

Senior forward Isaiah Mucius scored 12 points and drilled four three-pointers himself. He emphatically yelled, “I’m back,” after drilling back-to-back threes in the opening minutes of the game, referring to his absence from the Clemson game due to an illness. Forbes praised his impact after the game.

“He’s become one of the better defenders in the league,” said Forbes. “He rebounds the ball, he’s a great communicator, he’s got tremendous spirit. We need that. We missed him last game.”

On the other hand, Louisville did not get much production at all from their starting five. They combined for just 18 points.

“We found five guys (on the bench) who competed, had a really good rhythm, and played together, who cut the lead to single digits,” said Louisville acting Head Coach Mike Pegues. “We dug ourselves another hole in the second half that we weren’t able to climb out of. Rough, rough night for everybody involved.”

One Cardinal, however, put together an excellent effort in the loss, junior forward Sydney Curry. Entering Saturday, Curry was averaging just 4.8 points per game, but he was very effective against the Demon Deacons, scoring 28 points on 13-18 shooting.

Wake Forest secured the win without the services of graduate big man Khadim Sy, who injured his foot versus Clemson. Forbes revealed after the game that his MRI came back negative and that he has a chance to play Wednesday on Senior Night against North Carolina State.

“Losing [Sy] hurts us defensively, it doesn’t give us the opportunity to play as big as we like to sometimes,” said Forbes. “But that’s why you have depth and why you have guys ready to play.”

British freshman Matthew Marsh and Cameron Hildreth saw an increase in minutes and performed admirably. If the coaching staff can rely on them for quality minutes off of the bench moving forward, depth can finally be a strength for this team.

Another highlight off the bench was the play of senior guard Miles Lester. The fan-favorite drilled a three-pointer in the final minute of the game, igniting the crowd of over 1,000 students in attendance at the Joel Coliseum.

Wake Forest can tie its single-season record of 13 ACC wins if they take care of business on Senior Night on Wednesday, March 2, against North Carolina State.