The win secures Wake Forest the No. 11 seed in the tournament and a rematch against Virginia 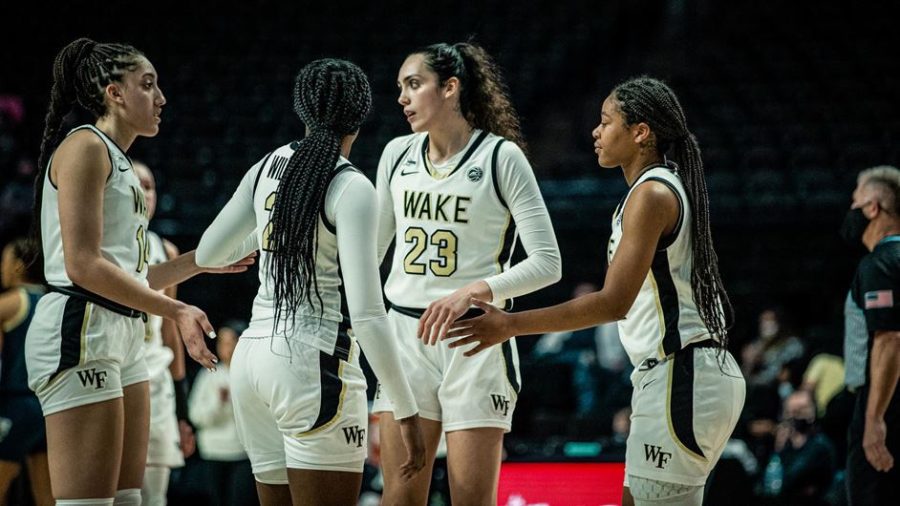 Wake Forest women’s basketball closed out the regular season this week by facing off against Syracuse and Georgia Tech. Coming off back-to-back losses, the Demon Deacons were able to turn it around against Syracuse but came up short against Georgia Tech in their regular-season finale.

On Thursday night against the Orange, Wake Forest put up a dominant performance to earn a 76-60 victory. Senior forward Christina Morra was a force to be reckoned with, scoring a career-high 21 points and controlling the boards with a career-high 15 rebounds.

“Christina played so well tonight, achieving career highs in both points and rebounds,” Wake Forest Head Coach Jen Hoover said. “When we get a kind of night like that from her, we are very hard to defend because it opens up so much for us offensively.”

The Demon Deacons jumped out to a quick 8-0 run to start the game and controlled much of the momentum from there. Syracuse could not get anything going and tended to only capitalize on unsettled transition points. Once Wake Forest tightened up their offense and possessed the ball, Syracuse had no answer. The Orange defense opened up, and Wake Forest took full advantage, scoring 44 points in the paint. For the sixth straight game, the Demon Deacons had four players scoring double-digits. In addition to Morra’s 21, freshman guard Elise Williams scored 11 points, junior forward Niyah Becker added 13 and sophomore guard and ACC scoring leader Jewel Spear had 19. All around, it was a dominant performance for the Demon Deacons and was their largest margin of victory against an ACC opponent this season.

In the regular-season finale, the Demon Deacons looked to upset No. 22 Georgia Tech. Hailed as one of the best defenses in the nation, the Yellow Jackets were looking to lock down Wake Forest early, but they could not do so. Spear opened the game with a three-ball and Morra followed up with back-to-back scores, allowing Wake Forest to jump out to a 7-3 lead. Spear added another three-pointer before the quarter ended. Spear and Morra combined for 13 of the Demon Deacons’ 16 points in the first, yet Georgia Tech held the lead after the first quarter.

Six straight points by the Yellow Jackets in the first two minutes of the second quarter shifted the momentum their way, but Wake Forest was not out of it yet. Junior forward Olivia Summiel hit a corner three to bring the Demon Deacons back to within four. On the final possession of the first half, the ball went to none other than Spear who hit a deep three to put Wake Forest up 33-32 going into the locker room.

After the half, the game became a back-and-forth affair with both sides trading blows. Georgia Tech took advantage of the paint to build upon their lead and led by seven entering the fourth. With the shot-clock winding down, Becker hit a bank shot from the elbow to pull to within one. She also came up clutch with a block on the defensive end, but a scoring drought late in the fourth quarter allowed the Yellow Jackets to pull ahead. A small glimpse of a comeback came when Summiel hit another clutch three to cut the deficit to five with a minute and a half left. In its last few possessions, though, Wake Forest came up short and fell 64-56.

Despite the loss, the competitiveness and drive shown by the Demon Deacons is crucial for this time of year.

“I am proud of the effort we are playing with headed into the postseason,” Hoover said after the game. “We will continue to work this week before heading to Greensboro.”

Wake Forest women’s basketball will face Virginia in the first round of the ACC Tournament. They previously beat the Cavaliers 68-53 in the regular season.