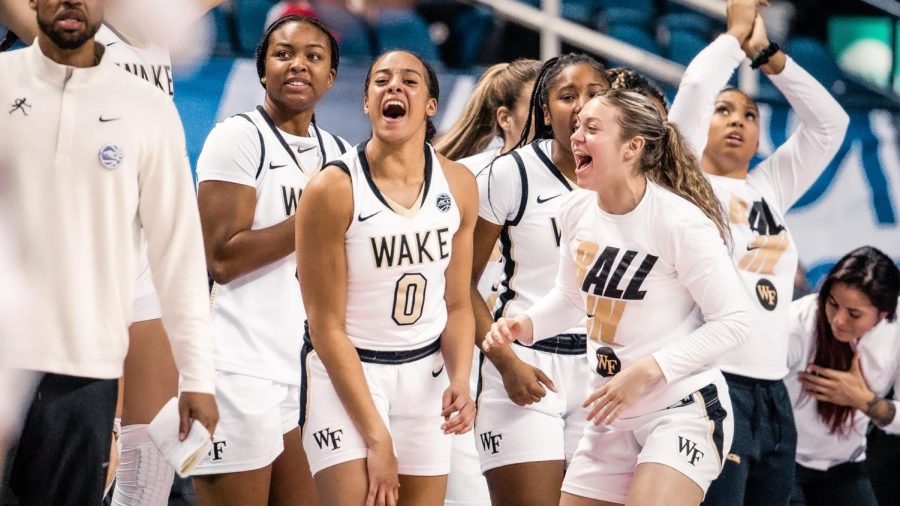 Wake Forest women's basketball looks forward to facing Georgia Tech in the next round.

Wake Forest women’s basketball opened up ACC tournament play with a 61-53 win against the Virginia Cavaliers.

Despite struggling most of the game, the Demon Deacons were able to rally behind a strong fourth-quarter comeback to move on in the tournament. The team’s top scoring threats performed well. Sophomore guard Jewel Spear Spear finished with 23 points, and senior forward Christina Morra followed with 13.

“Everyone stepped up and hit some sort of big shot in the run that we made,” Head Coach Jen Hoover said. “I couldn’t be more proud of this team’s character. We came to Greensboro on a mission and we were really focused and locked in.”

From the beginning, the Cavaliers made their defensive presence known. They locked down Spear and caused problems for the rest of the Demon Deacons. Wake Forest’s sloppy play in the first quarter resulted in many turnovers, but Virginia was not able to capitalize on these mistakes.

Rather, the story of the first half was the rebounding power of the Cavaliers. Virginia scored many of its points on second-chance efforts, and the Demon Deacons were outrebounded. With Spear locked down and trapped at the point, Morra was able to score in the paint to keep Wake Forest in the game. The Cavaliers went on a run late in the second quarter and headed into the locker room up 29-24.

Wake Forest’s defensive and rebound struggles continued in the second half. Virginia controlled the glass, especially on the offensive end. After the Cavaliers extended their lead to eight thanks to a 6-0 run, Wake Forest ended that run with a baseline jumper by junior forward Niyah Becker. Wake Forest’s offense began to get going as Spear drilled her fourth three-pointer of the game to pull them within one point.

Heading into the fourth quarter, Wake Forest trailed 45-42. Virginia continued to attack the paint, but Spear answered with her fifth three-pointer of the night. Junior forward Olivia Summiel stepped up when it counted. She hit a jumper from the elbow, provided a crucial defensive stop at the other end with a block and then hit a three-pointer on the next possession to bring Wake Forest within one.

As the Demon Deacons began to turn it around on defense, freshman guard Elise Williams stole the ball and went coast to coast to tie the game. Further defensive stops allowed Wake Forest to begin a 14-2 run in the last five and a half minutes.

Wake Forest was also able to turn it around at the glass, out-rebounding Virginia 38-35.

Wake Forest moves on to face and try to upset No. 6-seed Georgia Tech. This will be a rematch of last Sunday’s contest, and the Demon Deacons will be looking to stay in Greensboro to fight another day.