The loss ends the season for the Demon Deacons 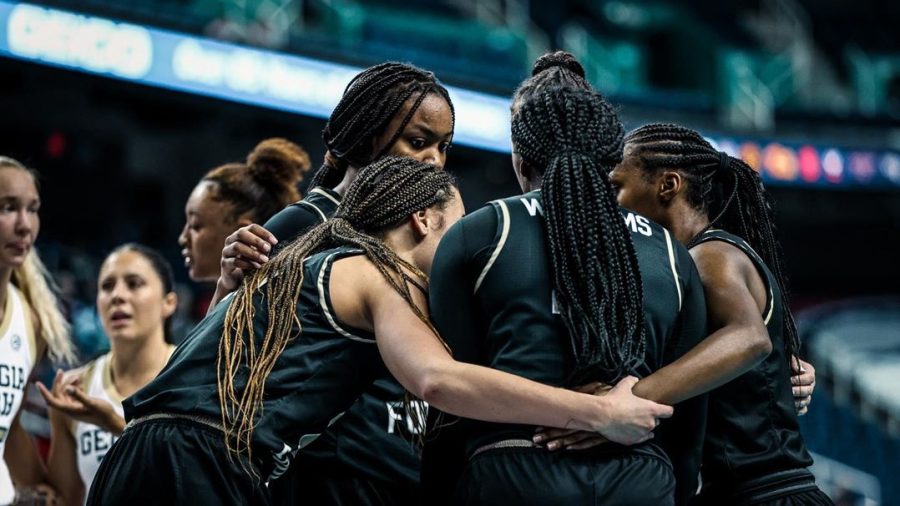 The Wake Forest women's basketball team huddles during a second-round game of the ACC Tournament.

Postseason play continued for Wake Forest women’s basketball as they faced No. 25 Georgia Tech in the second round of the ACC Tournament. The Demon Deacons kept it close for much of Thursday night’s game but came up short with a final score of 45-40.

“This is a night I do not like,” Head Coach Jen Hoover said.  “This team still came out, fought and gave me absolutely everything that they had.”

Wake Forest was without their key inside presence from senior forward Christina Morra, who missed the game due to illness. The Yellow Jackets came out firing, jumping out to a 7-0 lead but junior forward Olivia Summiel got the Demon Deacons started with a driving layup. Wake Forest’s freshmen helped to get the offense going, with forward Malaya Cowles and Elise Williams scoring on back-to-back possessions. The Demon Deacons trailed 16-6 after one quarter but were able to iron out their rebounding troubles against Virginia, outrebounding Georgia Tech 11-9.

Wake Forest’s defense was the story of the second quarter. Georgia Tech did not score a single point in the opening five minutes of the quarter – allowing the Demon Deacons to claw their way back. Offensive leader Jewel Spear was limited by a foot injury for much of the first but was able to net her first point at the charity stripe. Wake Forest went into the locker down seven, but their defensive presence was crucial. They limited Georgia Tech to just four points in the second quarter and controlled the glass 26-17.

In the third, the narrative was much the same. Wake Forest’s defense stepped up when it counted, the Yellow Jackets went 4-of-11 from the field and turned the ball over 14 times. Summiel, despite a broken wrist, hit two clutch threes to bring the Demon Deacons to within two.

Cowles started the scoring in the fourth, scoring on back-to-back possessions to bring Wake Forest level for the first time in the second half. Spear finally connected from behind the arc, hitting her first and only three of the game. Spear was successful at drawing fouls the entire game, and pulled the team to within one with a minute and a half remaining. Georgia Tech answered with a three to grow their lead to four. Wake Forest couldn’t get it going on their last possessions, and despite free-throw struggles from the Yellow Jackets, couldn’t get the job done.

Wake Forest women’s basketball did its best to deal with the cards they were dealt. Injuries to their star players proved to be the difference in this loss. The loss ends the season for the Demon Deacons, and they finish with a record of 15-16.