Behind the mask: returning to WFU amid COVID

Exploring the impact of COVID on one Wake Forest International student 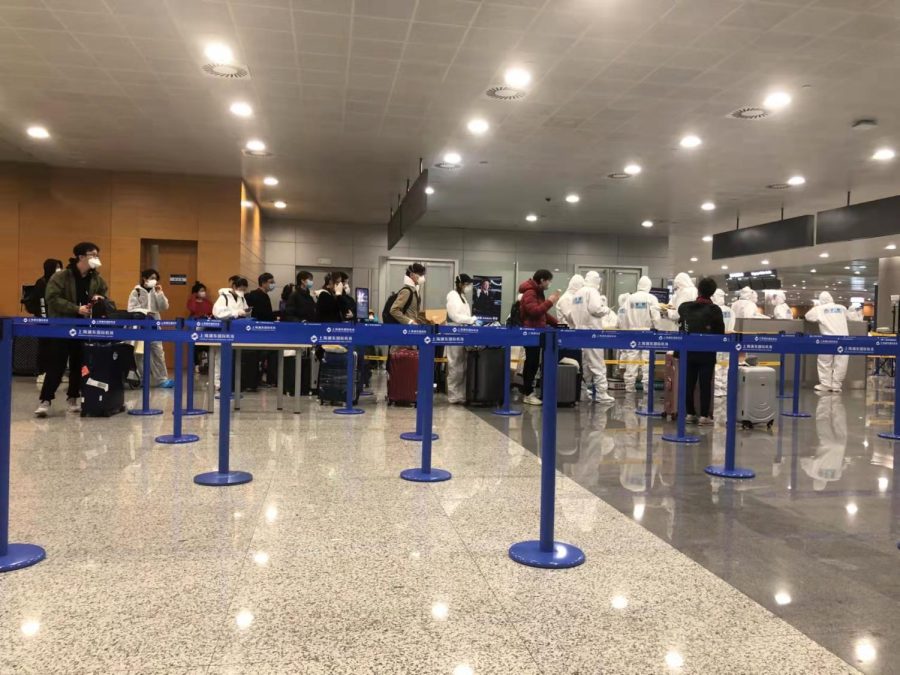 Zhu’s heavy backpack weighed her down as she made her way down the airplane, avoiding the outstretched limbs of passengers in other rows and gripping her ticket close to her body until she found her window seat. Nobody sat directly to her right. But the aisle seat was occupied by a man using his t-shirt as a makeshift mask to cover his nose and mouth.

“It was my worst nightmare,” she recalled.

Stepping off the plane in Los Angeles, all Zhu could think about was food. Hundreds of passengers ran past her with masks either under their nose or chin. Since she did not want to take her mask off on the plane for even a second; her next meal would occur in Beijing.

Zhu then had to board an additional flight to Beijing, China. She prepared to leave her dorm at Wake Forest University with exactly 14 days worth of clothing, enough to last through the entire quarantine.

Months earlier, the former president, Donald Trump, and his administration sealed the border and restricted travel in and out of China. At the time, an unknown disease, now termed COVID-19, was spreading and the American government decided that closing the border was their best option to protect the country. However, this strategy left Zhu with no way of getting home.

“All I wanted was to fly home, I got more homesick by the day,” Zhu said. “The process was too complicated and I just had to wait it out.”

For any Chinese student to get home during this time, they would need two negative covid tests — rapid and viral — a lung scan and a 14-day quarantine once arriving. If a person had been infected with COVID-19, they need to be recovered for six months, making it impossible for certain students to get home.

Given that 46% of Wake Forest’s international students are Chinese, the university made as many accommodations as possible with their limited staff.

“We asked, they listened, and we all made it work,” Zhu said. “We all were moved to the same dormitory building, but at least we had housing. The Pit was open, but that was our only option.”

On June 8, 2020, Zhu was able to board a flight back to China and after a two-week quarantine, reunited with her family. However, her expectation of returning to Wake Forest’s campus in August was destroyed.

In early July, the Trump Administration rescinded visas for all international students taking fully virtual courses, which was Wake Forest’s plan. Students became aware of the change through an email sent by the university.

“I opened the email and was devastated,” Zhu said. “I could not come back to campus; I did not know when I would ever be able to come to campus.”

However, multiple universities sued the federal government in response to this policy. Wake Forest joined as an amicus curiae, a status that allows a person or institution to submit a brief as a third party.

“This extremely affected all of our students abroad and we felt like we now had no control of the situation,” said Great Smith, Senior Advisor for International Students and Scholars at Wake Forest University.

In response to the lawsuit, the Trump administration rescinded the policy allowing students to legally remain in the country. Students with valid visas could now return to campus, but Zhu’s visa expired. The Trump administration stopped processing and renewing visas for applicants abroad due to a lack of resources, so universities were forced to replan the upcoming Fall 2020 semester.

Zhu checked her emails every day, waiting for updates from the university on what her courses would look like in the fall, if she could take any at all. Her biggest fear was falling behind, not being able to keep up with her coursework or graduate in time.

At exactly midnight on Jan. 10, 2021, Zhu sat down at her desk, in her small, dark room to begin her school day. Her blue star patterned curtains stayed closed on her left; behind them was the dark, lifeless city of Beijing.

“I would rather have the little stars with me than the darkness,” Zhu said. She opened her laptop and logged onto Zoom.

Since August 2020, Zhu had been taking classes every night from her bedroom — there was no other option. Fluorescent lights glared down on her, almost as if they were trying to keep her awake. She was in China living in a United States time zone.

She finished class around 6 a.m., about the time when her parents got up to start their day. They were living in the same space, but not living the same lives.

“Good night,” Zhu would say, and her parents would respond good morning.

Many days she started her homework but became stuck when she realized many American sites were blocked by the Chinese government.

“The censorship was getting worse; I had no access to a lot of information I needed,” she explained.

Many times throughout the semester, she woke up her father during his sleep because the internet connection was not working or unstable. This meant that their VPN, which allowed her to use foreign internet, was down. Zhu lived this daily cycle for about nine months — the entirety of her junior year.

Ironically, from her professors’ point of view, she did really well. Professor Justin Catanoso, Zhu’s journalism professor, explained how her performance was the same or better than students taking News Literacy on campus.

“Other than her looking a bit sleepy, her participation was just as regular and insightful as any others in the class, often more so,” Catanoso said. “While she was doing her reporting from Beijing, much of it over Zoom with sources in other parts of the world, her work was not hampered or different from those working on campus.”

He noticed her trying to fight a fog in her head, but he always called on her as much as any other student as participation was not an option. He did not treat her any different than a student physically on campus.

On Aug. 17, 2021, Zhu sat by herself at a small table in Benson University Center. She took in the people around her, the noise, the shuffle and the smell of American fast food. She took her first bite of waffle-cut french fries and Chick-Fil-A sauce, the moment she has been waiting for.

“I missed that so much,” Zhu said. “Nothing compares to that in China.”

Life was finally returning to a new type of normal on her first day of senior year.

“I felt that air at Wake,” Zhu said. “It is so much fresher than the [air] in Beijing, I could breathe well.”

Then she unpacked her suitcases at Dogwood Residence hall and felt like a normal student again. She went directly to her favorite place on campus; the track.

“I missed the track more than anything,” Zhu said. She ran 28 laps before she was so out of breath she had to stop. Life felt real again.

The transition back to campus was not as easy as Zhu assumed. Because she was in China a whole year she had to readjust to living away from her parents.

“I felt like a freshman again, being independent was a big struggle,” she said. “This is the time I have to be an adult.”

The initial anxiety was put aside by the beginning of classes. Even though she enjoyed in-person classes instead of virtual ones, the workload picked up and overtook her daily life.

In those first months, when she looked at a classmate, half their face was covered, but that was better than looking at them in a little box.