Case studies: David Lynch and the rise of dark suburbia

"I mean, it sounds like a good daydream, but actually doing it would be too weird": the reality of the American dream 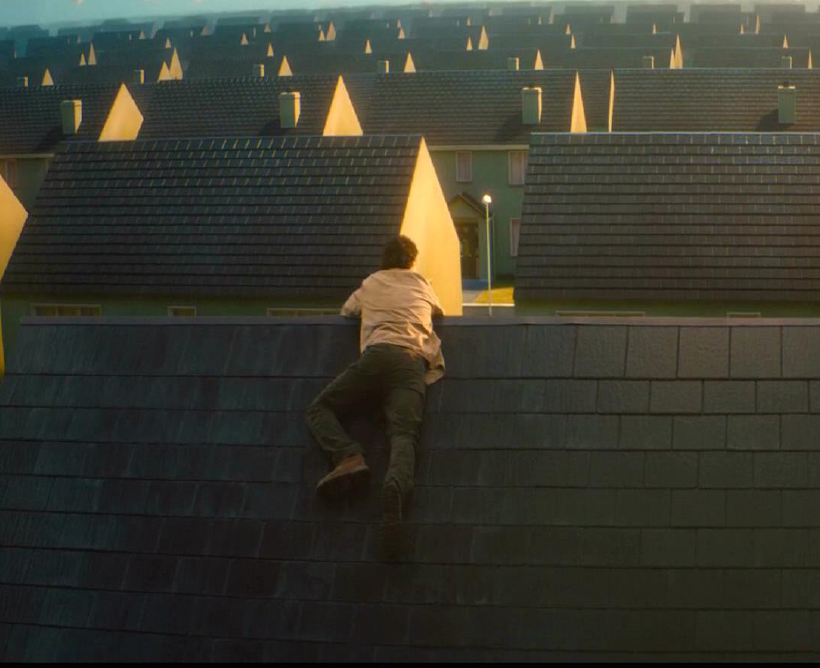 Tom ponders his isolation and the futility of his actions in "Vivarium".

There is something about this sequence, though, that is subtly unnerving — a feeling which is reinforced as the camera soon makes its way to a pile of beetles squirming below the manicured grass, revealing the reality underneath the shimmering facade.

The two shots aren’t entirely unrelated — or, at least, they shouldn’t be — but there is a reason why we almost expect the bugs, the filth and the ugliness. That expectation is exactly what Lynch capitalizes on as he sets the mood for the entire film.

Lynch’s film marks a watershed in Western thinking. As people were becoming increasingly aware of the dangers of American exceptionalism and the fragility of the American dream — in combination with more positive evolutions like efforts towards inclusion and diversity — things changed. The public began to turn its back on the sanctity of the “White Flight” suburbs of the 50s and 60s and the nuclear family with dad’s station wagon parked out front. Something about uniformity wasn’t comforting anymore.

It’s easy to look at the suburbia trope in film and television and write it off as people poking fun at unfaithful housewives or apathetic fathers, but that doesn’t explain why it is so effective in contemporary media.

What about nice homes occupied by happy, normal families is so eerie? Why does too much pleasantness induce anxiety?

One of the most explicit nods to the dark suburbia trope is “Vivarium”. In this film, Lorcan Finnegan captures a very specific type of dread which latches on to a relentlessly monotonous life.

Tom and Gemma are looking to buy their first home, and they are led into a neighborhood in which every single house is identical except for the number on the front door. When they try to leave, they become so disoriented and confused that it’s impossible for them to escape. In utter isolation, we watch them resort to typical gender roles — Tom works tirelessly to dig a hole in the front yard to escape while Gemma tends to the house and child.

They sink into despair, straining desperately toward a future beyond their grasp. When Tom dies, he is buried in the grave he spent months digging. I mean, seriously, the metaphors write themselves. “Vivarium” is so fresh and modern that it seems hard to believe it is a critique of a lifestyle from the 50s, but that is because the facade of the American dream never entirely faded — it has just constantly reinvented and rebranded itself.

“Them” is a 2021 Amazon original that also leaned on dark suburbia for its artistic vision. Set in 1953, a Black family looking for a better life moves to an all-white Los Angeles neighborhood. Here, the hegemony extends beyond the houses and encompasses the people as well, creating a suffocating environment. As expected, the Emorys are treated horribly by their neighbors, but the unexpected twist lies in the sinister nature of the house itself. The haunting nature of their home symbolizes their own inherent discomfort with the neighborhood that would exist even if their neighbors weren’t constantly plotting to remove them. There is something about that uniform street with its cookie-cutter houses that is just as disturbing as the racism it harbors.

There are plenty of other films and television shows that have adopted this motif to create uncertainty within the viewer, like “Donnie Darko”, “The Stepford Wives” and even the hilariously sinister “Desperate Housewives” with its Wisteria Lane. It’s something that you don’t notice until you do, but then you can’t stop thinking about it.

Perhaps it has to do with the uncanny — looking at something that is unknown but feels familiar. Perhaps we on the outside looking in are just inherently suspicious when things are too neat and orderly. Perhaps this tension is one that has been created by the media that precedes it, but I don’t think so. There is one path of reasoning that has yet to be explored because it is, well, a little too unpleasant to stomach.

The real reason for our aversion to cul-de-sac America and its promise for a perfect life is because perfection, itself, is unsettling.

We all need to wish that we were healthier, richer, more popular, happier, more successful or more fulfilled to keep ourselves going. We have to be able to convince ourselves that there is something out there for us that will make life better than it is now — something worth working towards. If we have everything that we want, then all we can do is lose that happiness. The idea — the dream — of the perfect life is more pleasing, more essential than the perfect life, itself.

Because what is one to do if they wake up one Saturday morning and they find themselves unable to be occupied by mundane conflict resolution cycles? What is that person to do if they are unhappy with who they see in the mirror — what if they no longer even know who they want to see? What if one has everything that they think they should want and still find themselves unhappy? What if they are forced to spend a moment alone with their thoughts and confront the fact that they are utterly unfulfilled?

The trope is so effective at adding a disturbing element because it functions as a symbol of the perpetual instability within ourselves and because it subtly reminds us of our inability to reconcile our true selves with the world to which we are subjected.

If we look long and close enough at that thing that seems like such a wonderful daydream, we start to realize that actually living it would just be too weird.