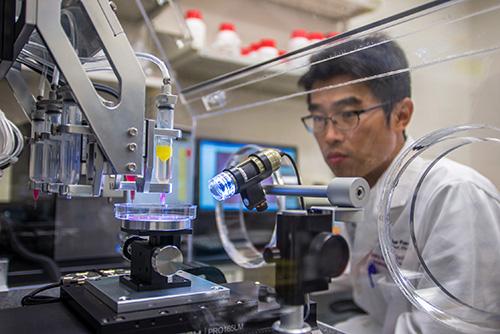 Within the last few years, 3D printers have gained national attention as their potential uses continue to increase.

Scientists at Wake Forest Baptist Medical Center (WFUBMC) are adding to that list after they recently proved that printing live tissue to replace injured tissue in patients is possible.

“We take a very small piece of tissue from the patient, one half the size of a postage stamp,” said Anthony Atala director of the Wake Forest Institute for Regenerative Medicine. “We basically harvest the cells and allow them to expand outside the body on culture plates where they replicate. And a few weeks later, we then have enough cells to create new tissue, so we then place these cells in printing cartridges and lay down the cells to print tissue.”

Atala further explained how this revolutionary technology could be used practically for a large range of injuries.

“If we do have a patient that has an injury, we can do an x-ray of the injured site,” Atala said. “We can transfer the data from that x-ray to our software program [which sends it] to the printer and drives the printer to create a structure that fits that patient’s defect.”

Though 3D printing live tissue is not a new idea — the project started about 12 years ago — but Atala and his team overcame one of the biggest obstacles in the process: printing tissue that can survive outside the body.

“Nature has given us a challenge which is about two tenths of a millimeter,” Atala said. “That’s the maximum distance from which cells will survive without nutrition.”

That is a challenge that Atala and his team overcame. According to Atala, when printed tissue is implanted in the body, blood vessels will connect themselves to the tissue, but in the meantime while the vessels are growing, the tissue needs another source of nutrition.

“We overcame that challenge by printing micro-channels in the structure,” Atala said. “And these micro-channels become like a highway and allow nutrients to the central portions of the tissue that we were printing.”

The overall strength and durability of the tissue has also been an issue in printing live tissue.

However, scientists at WFUBMC’s Institute for Regenerative Medicine created the Integrated Tissue and Organ Printing System (ITOP) over a 10-year period.

“The system deposits both bio-degradable, plastic-like materials to form the tissue ‘shape’ and water-based gels that contain the cells,” said WFUBMC’s initial press release. “In addition, a strong, temporary outer structure is formed. The printing process does not harm the cells.”

WFMBC’s research was funded in part by a grant from the Armed Forces Institute of Regenerative Medicine.

“One of the most difficult issues when treating traumatic wounds in both the military and civilian populations is the availability of donor tissue,” Taylor said. “Producing the necessary tissue constructs to immediately replace damaged or injured tissues is essential for quickly and effectively treating severely injured patients.  This will not only save lives, but will also improve healing so that patients can re-integrate fully into their lives.”

It may still be; however, several years before bio-printing tissue is widely used. The technology must first be approved by the FDA.

“There are many steps between successfully creating a tissue in the laboratory, and being able to use it in a patient,” Taylor said. “It must undergo extensive and strictly controlled testing, and be deemed clinically safe and effective by the FDA. That process may take many years.”

For new, revolutionary technologies such as this, FDA approval can take a long time. Taylor predicts that it will be five to 10 years before the technology is ready for wide-spread use assuming all the steps in the approval process are successful.