MBB defeats Towson in first round of the NIT, will face VCU 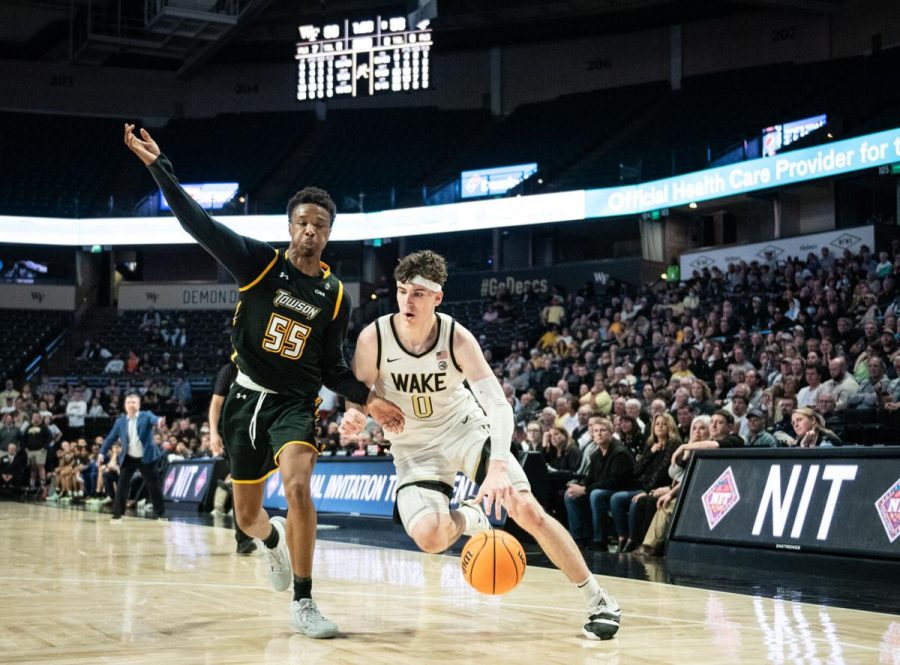 Wake Forest will face VCU in the second round.

A peculiar energy captured the Joel Coliseum on Wednesday night.

Something felt off about Wake Forest hosting a team from the Colonial Athletic Association (CAA) in the middle of March. It was their first non-conference game in three months and Wake Forest’s first appearance in the National Invitation Tournament (NIT) since 2006.

After a tough loss to Boston College in the first round of the ACC tournament, however, the Demon Deacons bounced back and defeated the Towson Tigers 74-64 to advance to the next round of the NIT.

Wake Forest clearly outmatched the CAA regular season champions, using full-court pressure in the first half to speed the game up and build a 43-22 lead at halftime.

“We came out of the gates with tremendous energy,” Wake Forest Head Coach Steve Forbes said. “We pressed full court to help us get going. I wanted to control the tempo and play fast from the get-go.”

The Tigers did not go away easily. They never cut the lead to fewer than nine, but the Demon Deacons got sloppy in the second half, with 11 of their 18 turnovers came in the latter period.

“They switched up their defense in the second half and pressed us, which we didn’t handle well,” Forbes said. “But we made adjustments and broke their press … I’m really proud of our team for handling it and coming up with the win.”

Graduate big Dallas Walton led the way with 17 points and 7 rebounds, including a perfect 7-7 mark from the free throw line. Joining him in double figures were senior forward Isaiah Mucius, who scored 12, and sophomore guard Damari Monsanto, who dropped 14 – all in the second half.

Monsanto nailed four second-half threes, and his 14 points were crucial in putting away the Tigers, as the Demon Deacons only scored 31 in the second half.

Wednesday night marked the first win in a postseason tournament for the program since 2010.

The focus right now of the college basketball world is the NCAA Tournament, and while that isn’t where Wake Forest ended up, they are still playing for a championship in March. Coach Forbes was appreciative of the fan support.

“I want to thank everyone for coming out tonight,” said Forbes. “I really appreciate all the fans and students for coming out to support us and providing great energy for the first round of the NIT.”

Next up for the Demon Deacons is another game at the Joel. On Saturday, Wake Forest hosts a strong VCU team that was right on the NCAA Tournament bubble as well.  VCU defeated Princeton on Tuesday to advance and enters the game as a five-point underdog. The game will be played at 4 p.m. on Saturday and will be streaming on ESPN+.