Why I’m voting for Ethan Wearner (and you should, too)

Wearner's approach stood out in the Executive Debate 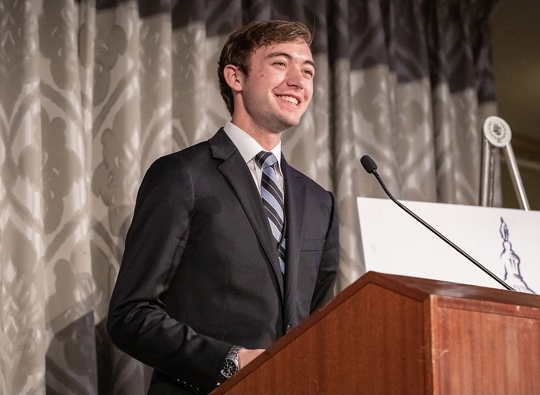 Update, 11:33 a.m. March 22: After discussions with the writer and review of the content, we have determined that the opinion in this article was not based on falsehoods uncovered by the Student Government Elections Committee. The author was unaware of these falsehoods at the time of writing and publication.

Disclaimer: Due to our inability to endorse a candidate in the Student Government presidential race, the opinion section decided to – on a first-come, first-served basis – give a staff writer the opportunity to attend the Student Government Executive Debate and provide an opinion. As with all non-editorial opinion pieces, the views expressed below are the author’s own and are not necessarily shared by the Old Gold & Black Editorial Board.

The Student Government Executive Debate was held this past Sunday.  This year’s candidates for the executive offices expanded on their viewpoints and goals for the upcoming academic year. The debate for president saw Pilar Agudelo, a junior from Oregon, facing off against Ethan Wearner, a junior from Colorado. The two engaged in conversation on what they would do to serve the student body and the initiatives they would strive to implement. Both candidates gave great speeches and well-thought-out answers to various questions, and both would be sure to bring a sense of leadership and action to the position of president.

However, one of these candidates stood out to me over the other. While both candidates were able to offer hope and inspiration to what they would bring to the role, Wearner seemed the most capable to lead our university out of a chaotic time in Wake Forest history. In the time before this election, our campus has experienced a global pandemic, a university-wide failure to address sexual assault and a fertilizer plant fire that caused a mass displacement of students. Now more than ever, the student body needs a leader who will take action and find practical solutions to the problems we are facing on a repetitive basis. I believe Wearner is the right person for this job.

During the debate, Wearner expanded on his “Constituent Outreach Program” initiative, which is part of his larger platform to increase student engagement. This program would increase the interaction that students have with Student Government through RAs and “Community Liaisons”. These community liaisons would work with groups on campus that have been left out from the decision-making process of Student Government. Wearner feels that the past administrations have not earnestly tried to communicate with students as well as they should have, and that many of the inner workings of student government have been unknown to the larger student body. Wearner hopes to remedy this issue should he be elected.

In this regard, Wearner stood out in contrast to his opponent. While Agudelo touched on increasing communication with marginalized groups, she still put the burden on the students to reach out, despite the fact that people are apprehensive to come out and say what problems they are facing. It should be the job of Student Government to connect to the students on the ground level through initiatives like the “Community Outreach Program”, which is just one prong to a multi-modal approach that Wearner seeks to implement as president.

Open discussion is especially important for the period of change in which Wake Forest University finds itself. As we navigate out of this pandemic, Agudelo promised better communication and diversity in the abstract, while Wearner provided specific policy ideas like more technological integration within our campus and better preparedness for issues that have yet to come. Wearner intends to increase the accessibility of university resources to marginalized communities, ensure the transparency of university information and foster a better connection between Student Government and the surrounding community.

Apart from issues surrounding communication, students face a variety of other issues in their daily lives. Mental health services on campus have been lacking in recent months, with many students expressing their frustration and disappointment in the university’s response. When asked about the recent changes in the University Counseling Center (UCC), Agudelo explained how TimelyCare, the telehealth company the UCC has recently partnered with, was inaccessible and unhelpful to students — an opinion shared by many on campus. Agudelo explained that she would work with the UCC to promote a better workplace environment so that counselors would want to work at Wake Forest. However, she did not specify how she planned to do this.

A student body president needs to come into office with an action plan, not lofty goals that could take most of the term to figure out. In response to the question on mental health, Wearner cited research he had conducted to explain his goal of hiring more counselors and to provide different mental health pathways like group therapy and mentorship programs between students and faculty. Wearner would bring a level of detail and accountability to the office of president because he has fully realized and thought-out plans to implement his policies.

One issue that Wearner does face is a lack of connectedness to campus. He was questioned about his personability as a candidate, especially compared to Agudelo’s diverse background and involvement with many organizations and departments on campus.  However, this election should not be about what groups you belong to, nor should it be a popularity contest.

While a student body president needs to be willing to meet with their constituents and listen to their concerns, an effective leader should be able to implement a system that would account for constituent connection apart from just one person. Wearner’s trickle-down outreach theory becomes necessary, then, as he focuses on building a network of communication that systematically connects him with the student body, accounting for areas where there have historically been gaps. Wearner argues for a full integration of the student body, where the Student Government is in the center and is completely visible and accountable to its constituents.

For these reasons, I encourage you to “Put the Forest First” and vote Ethan Wearner for Student Body President. I truly believe Wearner has what it takes to make every voice heard and to work with the university to make meaningful change as we navigate through these extraordinary times.