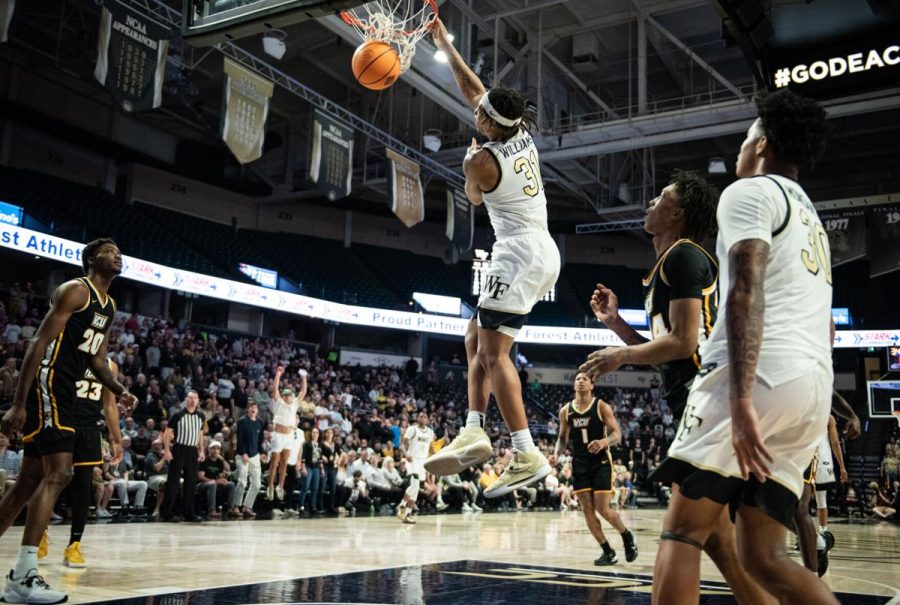 Alondes Williams' dunk capped off a solid performance by the Demon Deacons.

The Demon Deacons played two more games at the Joel this season than originally scheduled due to the National Invitational Tournament (NIT) and won their last home game 80-74 over Virginia Commonwealth University (VCU) on Saturday afternoon in the second round.

Wake Forest has now reached the quarterfinals of the NIT, and will take on Texas A&M in College Station, Texas on Tuesday. The winner will play in the NIT semifinals in Madison Square Garden.

“We beat a fantastic basketball team today,” Wake Forest Head Coach Steve Forbes said after the game. “VCU is very well coached and a hard team to play against. We handled their full court pressure well and did a really good job guarding them on defense.”

Although the Demon Deacons went into the locker room with a 43-35 lead, VCU fought hard and kept it close. However, VCU never whittled their lead down to less than a three-point deficit.

Forbes revealed after the game that Williams has been dealing with a turf toe injury, which explains his slight dip in production at the tail end of this season. It also makes his dunk in the final minute – in which he brought the ball down to his waist and reverse-slammed it over his head – even more impressive. That play brought the crowd of over 4,000 to their feet.

“We had another great crowd today with unbelievable energy in the building,” Forbes said. “I’m really thankful for all the awesome fans we’ve had all year.”

VCU is one of the best defensive teams in the country, forcing the eleventh most turnovers per game (17.06), and the sixth-best defensive efficiency on KenPom. However, Wake Forest came out on top in terms of the turnover battle. They committed 15 themselves but forced 19.

There was quite a choppy nature to this contest. The officials were constantly blowing their whistles, and 49 total fouls were called in the game. VCU likes to play an “ugly” style of basketball, and that is what ended up happening. The key to the Demon Deacons’ victory remained at the free-throw line in this game, as the Deacs connected on 29 of their 37 attempts.

The matchup versus Texas A&M will be played Wednesday night at 7 p.m. and will be televised on ESPN2.