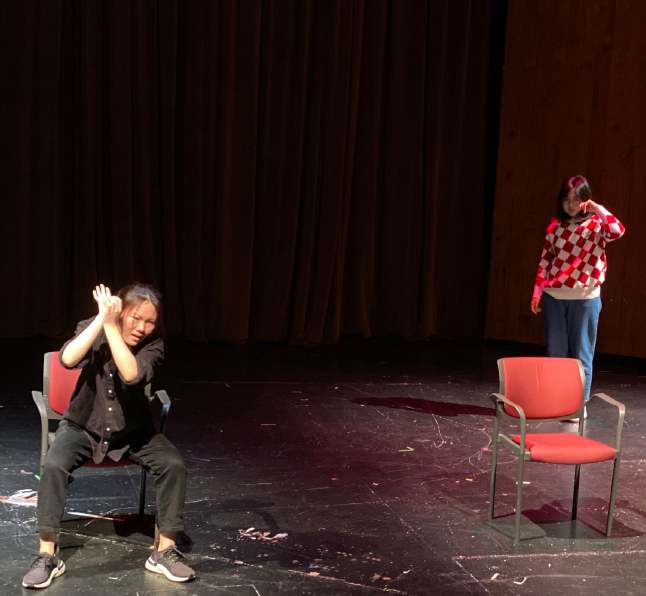 “Same Caged” was performed by two female actors, Ma (left) as the father and Zhong (right) as the daughter, and the set is just two chairs.

Bimoo Chinese Theatre Group, founded in 2020, is an organization at Wake Forest that strives to create a platform for Mandarin theatre. According to the playbill for “Same Caged”, the theatre group is dedicated to “bringing this Chinese production, the casts and crew hope that they could call more attention to the diverse culture, voices and expressions in this community.”

“Same Caged” is a simple production: two chairs, two actors and 20 minutes. Written by TianQi Liu, a Chinese playwright, and directed by senior Freya Zheng, “Same Caged” is a Mandarin, one-scene play that follows a conversation between a father and his nine-year-old daughter who visits him in jail. During the visit, the two discuss a classic Chinese math puzzle that many Chinese students learn in primary school.

The play’s namesake is inspired by this puzzle, which goes like this — in a cage of chickens and rabbits there are 35 heads and 94 feet in total, so how many chickens and rabbits are there? Through analyzing the puzzle, the father tells his daughter that he is similar to the rabbit in the cage — outnumbered and powerless, yet impulsive in his decision to strike back. Having faced bullying at school, the daughter also feels like she is a rabbit in the same cage. The back-and-forth dialogue reflects the core conflict of many East Asian families — the concealment of emotions by fathers.

While people’s impression of Chinese theatre is still dominated by Peking Opera — a Chinese opera from the late 18th century, in which speech, singing, mime and acrobatics are performed to an instrumental accompaniment — the younger generation of Chinese students seeks a way to merge western theatre with the culture and ideology of China and even East Asia at large. The theatre group offers a space of belonging for both Chinese international students who are far from their hometown and those who love and appreciate Chinese culture.

“The reason why I decided to put this play on stage is that I really liked how the playwright revealed the relationship between father and daughter through this storyline,” Zheng said. “A lot of key information was concealed at the beginning of this play through the lack of props to reflect how dads in China usually hide their emotions and their love for their family.”

“What surprised me during the process was that it wasn’t too hard to have a female actor play the father because the emotions, love and kinship are shared by all humans together,” Zheng said.

Sophomore Dawn Zhong played the daughter. She explained how she found it easy to relate to the female and daughter identities of this role but found it more difficult to play a child.

“It is not very difficult for me to be this character since I myself am a young girl and a daughter,” Zhong said. “But it is hard to go back to the scenario of being a nine-year-old. It takes time for me to be a small kid again.”

While Zhong had a relatively easy time getting into character, freshman Zewen Ma, who played the father, admitted she received the role somewhat unexpectedly. She soon discovered there is a lot to uncover and deliver through her interpretation of this typical East Asian father figure.

“I needed to especially focus on suppressing emotions and [displaying] the never-spoken love for his daughter because I think this is what the play aims to present,” Ma said. “They both care for each other so much but both never express their concern for each other, which I think is a very relatable point for a lot of people, especially Asians.”

“Same Caged” is not the first step taken to support the diversity of theatre at Wake Forest. Last year, the Bimoo Chinese Theatre Group presented their first mandarin play, “Kinderszenen”, which received wide praise from both faculty and students who came to see it. Yet, for “Same Caged”, almost half of the cast are freshmen, showing the enormous potential for the Mandarin theatre in the years to come.

Bimoo Theatre Group is preparing for its next play, “Sizhangji”, an hour-long play set in Republican-era China, which will be performed in the fall semester.